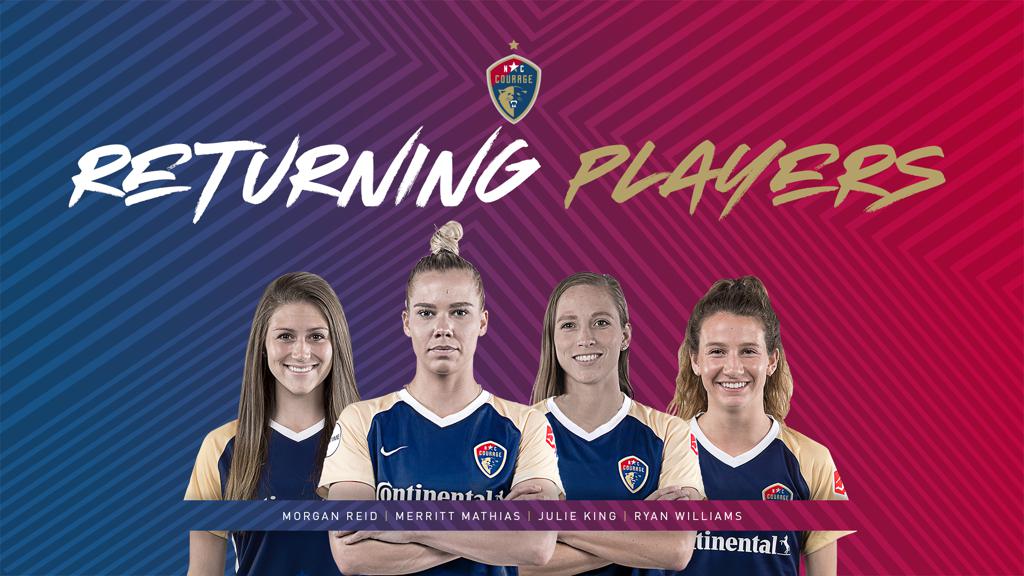 Mathias joined the NC Courage in a trade with the Reign FC at the beginning of the 2018 season. She quickly became one of the most important players on the field starting and playing 24 games for 2140 minutes.  Mathias had three goals in 2018, two of which came from outside the box. Mathias has recently spent time with the USWNT in the training camp that led up to the SheBelieves Cup.

“Merritt has been a major part of a very good defensive unit and an integral part of our attacking output,” said head coach Paul Riley. “It is huge to have her back. Her personality and competitive nature fit in with our culture. Looking forward to her continued growth as she looks to further establish herself with the USWNT.”

Reid, the first local player to sign with the NC Courage, spent most of the 2018 season with the team after being drafted 38th overall in the 2018 NWSL Draft. She was signed on as a national team replacement during the season and participated in the first ever Women’s International Champions Cup with the Courage. She saw playing time in both ICC matches as a substitution.

The Duke University product is a Raleigh native who spent her high school years at Cardinal Gibbons while also growing her game with her NCFC Youth team Chelsea Ladies ’94. The team, during her tenure there, won three national youth championships and sent all 18 players to Division 1 colleges.

“Morgan has developed her game a ton over the past 12 months and now the expectations are higher,” Riley continued. “She is reliable, relentless and positionally very good. I love her competitive nature and there is no ceiling to where she can go. She will continue her process into a top professional and we are excited to see her continued development.”

King is coming off of an injury recovery year. She was drafted by the NC Courage in the Boston Breakers Dispersal Draft in early 2018 but was unable to play during the season after undergoing a second ankle surgery. King was a defender for the Breakers in the NWSL from 2013-2017.

“I am excited to finally be coaching King,” said Riley. “I’ve always admired her work ethic, her no nonsense approach to defending, and her battle tested attitude. She will blossom here and after 18 months injured, she is tremendously hungry to bring further success to our club and get her personal development going in a positive direction.”

Williams was selected by the Courage in the 2018 NWSL Draft. The TCU graduate was selected 39th overall. Williams saw her first professional start in the championship game of the inaugural Women’s International Champions Cup. Williams was also a national team replacement player during the 2018 season with the Courage.

Riley has seen Williams grow over the past year. “Ryan has grown dramatically since she stepped into our practice cauldron a year ago. She is stronger, quicker, better in the tackle and more tactically sound. Ryan knows if you are not working on uncomfortable things you are probably not improving. She has shown huge promise and I look forward to seeing her progression during 2019.”