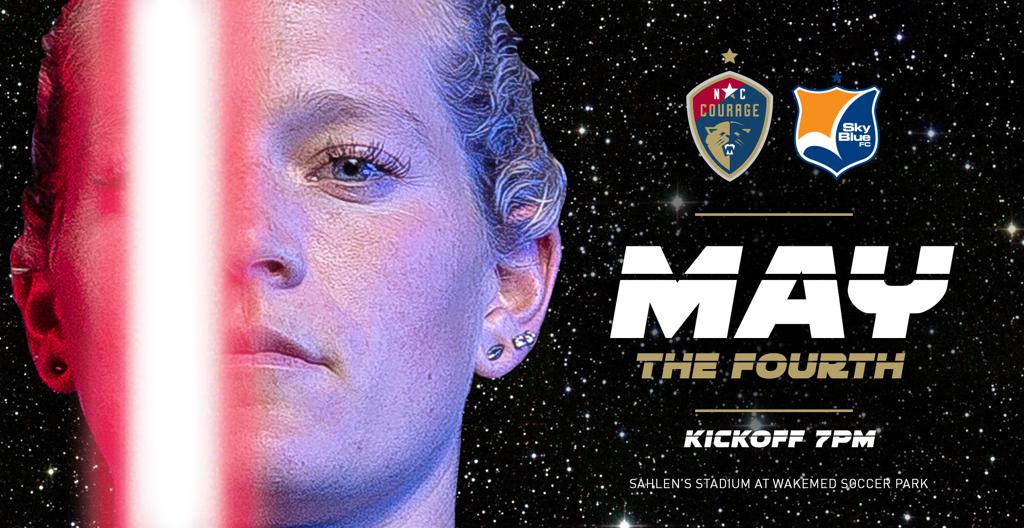 Cary, N.C. (May 2, 2019)- The North Carolina Courage take on Sky Blue FC on Saturday, May 4 at 7:00 p.m. in their fourth match of 2019. The two teams previously met in July 2018 where the Courage won 4-0 thanks to a hat trick from Lynn Williams and an additional goal from Abby Erceg. The defending NWSL Champions enter the month of May undefeated for the third consecutive season.

After starting the season with a draw, the NC Courage have recorded two dominating wins, outscoring their opponents 9-1. Most recently the Courage defeated the Houston Dash, 4-1. The game was loaded with historic moments, as Williams scoring her 40th career goal, Debinha scored the NC Courage’s 100th goal in club history, and Leah Pruitt scored her first professional goal. With her goal, Williams moved to fourth all-time in goals scored in the NWSL.

Crystal Dunn also added a goal in the 4-1 victory. Dunn leads the NWSL with four goals in three games. She also has an assist on the season and has recently been named the April NWSL Player of the Month.

Sky Blue FC is returning to action after a 2-2 draw with the Portland Thorns. Carli Lloyd scored early in the 6th minute off an assist from Raquel Rodriguez. Lloyd scored again in the 18th minute before Portland struck back, getting two quick goals in the 32nd and 34th minutes. Sky Blue has a record of 0W-2L-1D heading into Saturday’s match.

The North Carolina Courage has dominated the series with Sky Blue over the past three years, only losing one game in nine matchups. The Courage will look to continue their success against Sky Blue in Saturday’s match in hopes of staying undefeated in 2019.

The North Carolina Courage will be without Abby Dahlkemper, Crystal Dunn, Jessica McDonald, and Sam Mewis as they have been named to the United States World Cup Roster. Sky Blue will be without Carli Lloyd.

Fact to Know: The NC Courage have an overall record of 6W-2L-1D in the month of May.

Hinkle is a vital part of a very successful NC Courage back line that has only given up two goals in three games. She is known her playing her long balls into the speedy forwards of the NC Courage. She earned an assist on one of these balls against the Houston Dash on April 28. Hinkle played in 22 games last season while recording 1958 minutes and providing five assists.

Dorsey, the 5th overall pick in the 2018 NWSL College Draft, recorded four goals in 14 matches as a rookie. She was named the 2018 NWSL Rookie of the Year after a stellar season. The Duke University graduate looks to continue her success in 2019. She has played 265 minutes in Sky Blue’s first three games.

Up Next: The North Carolina Courage will visit the Chicago Red Stars on Sunday, May 12 at 6:00 p.m. ET. This will be the second match between the two teams this season.