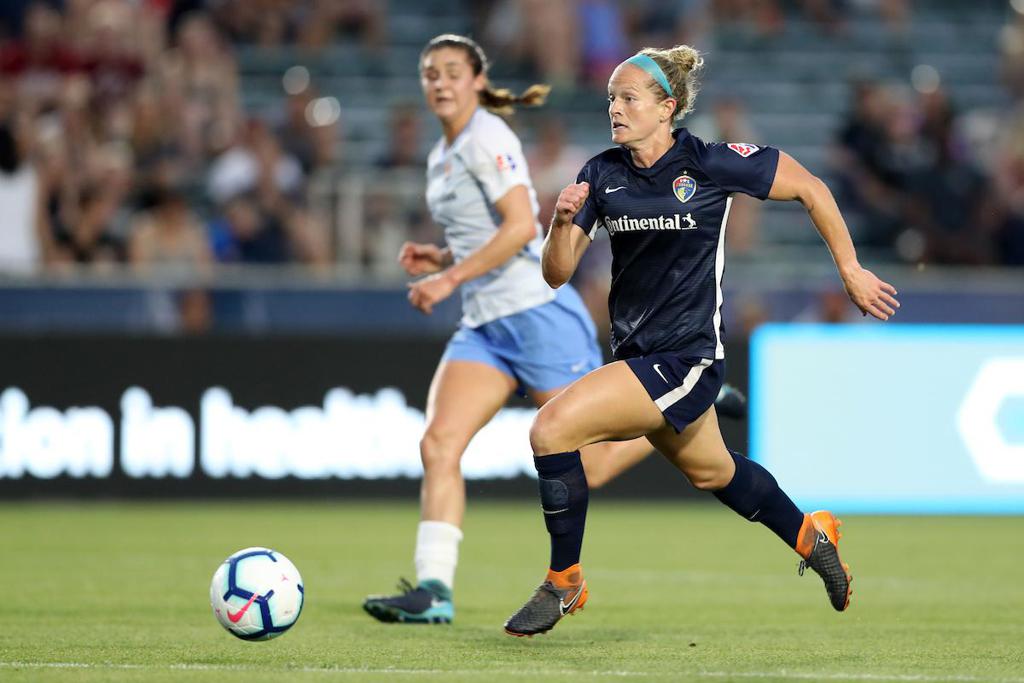 CARY, N.C. (May 4, 2019)- The North Carolina Courage (2W-0L-2D) tied Sky Blue FC 0-0 after the game halted in the 53rd minute for an hour and a half weather delay. Both teams remained scoreless despite several chances. The NC Courage ended the match with 28 shots taken compared to Sky Blue’s seven. The reigning NWSL Champions remain undefeated through four games.

“We bombarded Sky Blue for 25 minutes after the rain out,” said NC Courage head coach Paul Riley. “I thought during that time we would get a goal, but the ball never really bounced our way at that end of the field. That being said, I was happy with our performance overall.”

The first half of the match started out with balls flying from both flanks. Outside defenders, Merritt Mathias and Jaelene Hinkle, played in several crosses, creating numerous chances in and around the box.

Lynn Williams had a solid strike that hit the post in the 19th minute. Debinha turned around and hit the same post in the 33rd minute. The Courage took 16 shots in the first half compared to Sky Blue’s four.

Just a short seven minutes and 50 seconds into the second half, lightning struck, and the game entered a weather delay. The game finally resumed at 9:45 p.m.

Rookie, Leah Pruitt entered the game as a substitution when the game resumed and immediately made an impact, firing a dangerous shot in the 57th minute.  Just one minute later Debinha sent another shot flying that just barely missed the net.

Stephanie Labbé kept the score even in the 65th minute with a diving save. Savannah McCaskill of Sky Blue FC volleyed the ball, but the Canadian goalkeeper was quick to deny her.

In the 79th minute, Williams used her speed to catch up to Sky Blue goalkeeper Kailen Sheridan. The two met at the ball at the same time and the ball popped loose. Williams got to the ball but was not able to send a shot into an open net.

Sky Blue got a fast break in the 89th minute that would have resulted in a goal, but Mathias cleared it off the goal line. After a long, rain filled night, the score remained 0-0 at the final whistle.

Up Next: The North Carolina Courage travel to take on the Chicago Red Stars on Sunday, May 12 at 6:00 p.m. ET. The two teams first met in the NWSL opening game that resulted in a 1-1 draw.