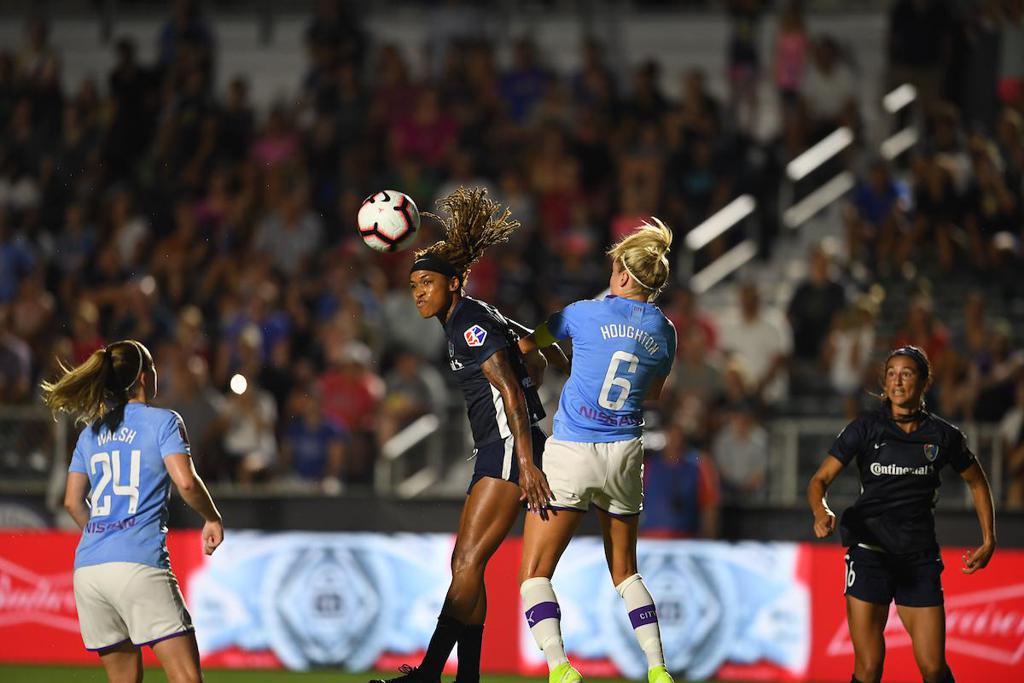 Second-half substitute McKenzie Meehan’s first goal with the Courage tied the game in the 84th minute before Jessica McDonald’s stoppage-time strike proved to be the game-winner. The Courage were victorious in the first game back in Cary for the team’s World Cup winners from the U.S. Women’s National Team.

With the victory, the Courage are set to take on Olympique Lyonnais on Sunday at 7:30 p.m. in a rematch of last year’s title game, which the Courage won.

The NC Courage came out pressing high on Machester City Women. In the first 10 minutes, Kristen Hamilton and Debinha both saw chances on net, but the shots were saved by Ellie Roebuck.

Debinha had another chance in the 17th minute when Jaelene Hinkle played a curling ball into the box. Debinha found herself square with the net, but her shot was blocked just in time by Man City.

In the 42nd minute, Georgia Stanway found herself with space and took the ball straight to the NC Courage net. She sent a hard-struck ball past Courage goalkeeper Katelyn Rowland from close range. The shot was one of Manchester City Women’s first real chances of the match. The NC Courage entered halftime down by a goal, despite taking 15 shots in the half.

Ten minutes into the second half, Dunn hit a hard shot straight at the corner of the net that Roebuck barely tipped off its path. The ball would’ve sailed into the net had it not been for the slight misdirection by Roebuck.

Following the weather delay, he equalizer finally came in the 84th minute when Meehan blasted a ball into the net off of a corner kick taken by Heather O’Reilly. Meehan joined the Courage after a trade with Sky Blue FC in June and the goal was the first of her professional career.

The NC Courage built off of the momentum after the goal was scored, creating opportunities into the final minutes of the game. In stoppage time, Hinkle played a ball up the left side of the field to McDonald who sprinted toward the goal. Roebuck came out to challenge McDonald, but she was able to get the shot off past the keeper and into the net.