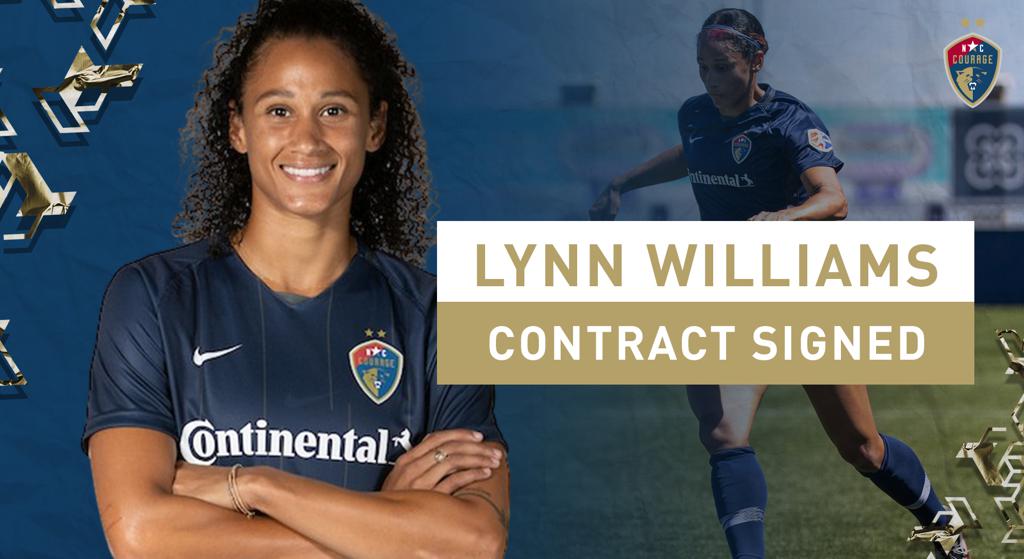 Cary, NC (August 17, 2020)- North Carolina Courage forward Lynn Williams has signed a contract through 2023, the North Carolina Football Club announced today. The NC Courage used allocation money to complete the new contract. Williams has scored more career goals in the NWSL than any other American. She has been a member of the NC Courage since 2017 when the Western New York Flash relocated to Cary.

“Lynn is an integral part of our system and her presence stretches teams out and allows our 10’s to utilize their strengths,” NC Courage head coach Paul Riley said. “She has considerably developed her game and her thirst and hunger to improve is illustrated on the training field every day. She has become better in every attacking category and it’s a massive boost to our club to have her sign a long-term deal.”

Most recently in the NWSL Challenge Cup, Williams scored a team-high three goals in five games. She also tacked on an assist in her 416 minutes played during the tournament.

Before becoming a member of the NC Courage, Williams won the NWSL Golden Boot with the Western New York Flash in 2016. She was also named the MVP of the NWSL that season as she helped lead the Flash to an NWSL Championship. Since then, Williams has won two NWSL Championships with the Courage and three-consecutive NWSL Shields.

Williams is no stranger to the back of the net. She has scored a total of 38 goals since 2017. She has added 17 assists to her resume with the Courage, as well, making her a huge offensive threat.

For her work off the field, Williams was named the recipient of the 2019 NC Courage Community Service Award. The forward led the team in community work and player appearances, many of which included working with youth players.

Between the 2019 and 2020 NWSL seasons, Williams spent time on loan with the Western Sydney Wanderers of Australia’s W-League. The forward scored four goals and had three assists in five games before returning to the U.S. to train and play with the USWNT. Despite missing more than half of the Wanderers’ season for international duty, Williams was still nominated for the Julie Dolan Medal for the best player in the W-League.

“Lynn has become one of the best strikers in the league and she continues to work on her finishing and overall game,” said Riley. “Lynn’s leadership, locker room personality, and impact on and off the field is immeasurable. We are delighted to have her back and for Courage fans to see her in her prime over the next few years.”