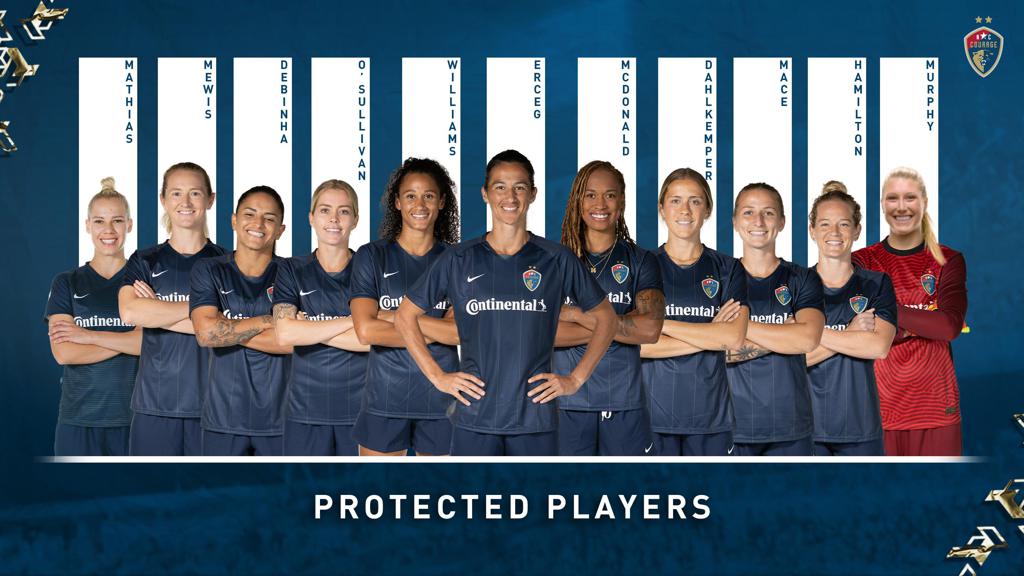 The Courage have elected to protect U.S. Soccer Federation player Abby Dahlkemper and the rights to Sam Mewis who is currently playing for Manchester City. The team has also protected international players Abby Erceg, Debinha, and Denise O’Sullivan.

Goalkeeper Casey Murphy was acquired by the Courage in a trade with OL Reign on October 22 for Crystal Dunn, who was then traded to the Portland Thorns. The talented, young goalkeeper has 26 appearances in the NWSL with OL Reign and a total of 108 saves.

Defenders Dahlkemper, Erceg, and Merritt Mathias have played 32 games together as a defensive unit between the 2018 and 2019 seasons. The defenders have a combined 18 seasons of experience in the NWSL. Mathias spent the 2020 season recovering from an ACL tear suffered during a match in September 2019.

Debinha, Hailie Mace, Mewis, and O’Sullivan have a total of 35 goals and 25 assists between the four players. While Debinha, Mewis, and O’Sullivan have years of experience in the NWSL, Mace has played just one season in the league as the Courage acquired her from Sky Blue FC at the beginning of 2020. The midfielder was drafted second overall in the 2019 NWSL Draft but elected to play overseas during the 2019 season. Mace saw 73 minutes of playing time throughout four games during the NWSL Challenge Cup and had one assist.

Kristen Hamilton, Jessica McDonald, and Lynn Williams have a plethora of experience in the NWSL and have played together for five-consecutive seasons under head coach Paul Riley. Williams is the all-time leading American goal scorer in the NWSL, while McDonald is one of the longest-tenured goal scorers in the league. Hamilton had a breakout season in 2019, finishing tied for third in the NWSL with nine goals scored. The three have a combined career total of 125 goals. Both McDonald and Williams have over 50 NWSL goals.

The NWSL Expansion Draft will stream live on Twitch on Thursday, November 12 at 7 p.m. ET as Racing Louisville FC joins the NWSL. For more information on the Expansion Draft, click here.