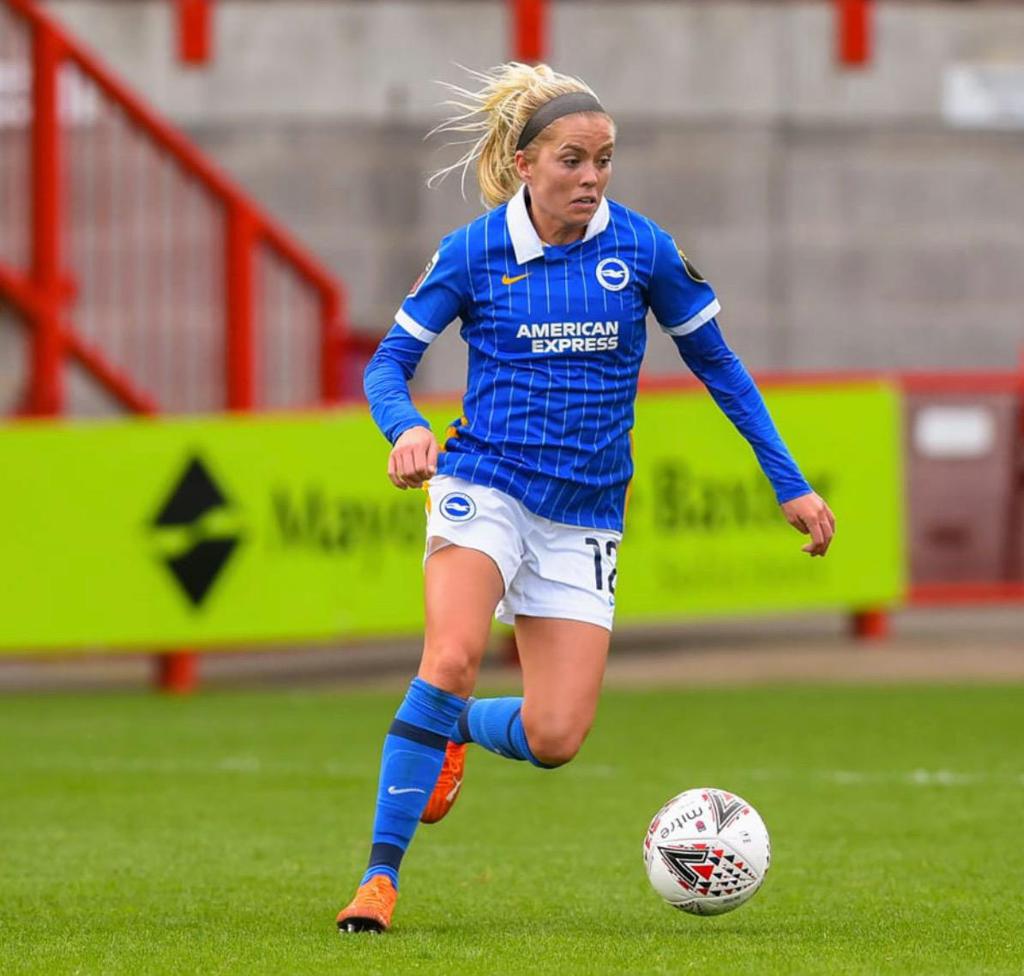 Denise O’Sullivan might have left the North Carolina Courage locker room in September, but she is continuing to make strides halfway across the world in England’s ever-growing Women’s Super League on loan with Brighton & Hove Albion Women.

With Ireland still in contention for a place at the European Championships in 2022, her loan move to England was highly influenced by navigating various quarantine travel rules. Moving to Brighton until the end of the year meant she could play for the national side without having to quarantine – something that would have been a formality if she had stayed in the United States.

At Brighton, her transition into the squad was eased by fellow Republic of Ireland international players Megan Connolly and Rianna Jarrett.

Her debut for Brighton was a tough test – away to one of the league’s top teams in Manchester City. A team that finished second in the league last season, boasting former teammate and Courage midfielder Sam Mewis in their ranks, as well as US international Rose Lavelle. Starting amongst the substitutes, O’Sullivan was introduced at half-time, and helped Brighton record a very impressive 0-0 draw.

In her next fixture, a Women’s FA Cup quarter-final against Birmingham City, O’Sullivan netted her first goal for Brighton. With Birmingham up 2-1 in the dying moments of the game, the 26-year-old headed in a goal past the goalkeeper in the last minute to send the game to extra-time. After a goalless extra 30 minutes, the game went to penalties – with O’Sullivan ending up on the losing side.

The next few fixtures saw O’Sullivan and Brighton face tough opponents – both in the league and in competition. The Irish international played all 90 minutes, as her side were beaten 3-0 by table-topping Manchester United, before losing on penalties in the Continental Cup to West Ham. A 5-0 defeat to Arsenal was the next game.

Brighton did end their run of league defeats in their following fixture, with O’Sullivan playing the entire game as they drew 2-2 away at Everton. But she couldn’t help the side as they were beaten by Aston Villa. O’Sullivan’s side finally got back to winning ways in the WSL in their away trip to West Ham, with Jarrett scoring the only goal of the game as Brighton won 1-0. Her most recent appearance for Brighton came in the Continental Cup, coming on as a 56th minute substitute as her side were knocked out of the competition after a 2-0 defeat to Reading.

Speaking with Brighton earlier in the season, O’Sullivan commented on her adaption to the English game, and looked at the differences between the WSL and the NWSL. She said: “The quality of the leagues are similar, but the style of play is quite different. It's a lot more technical here and it's very physical – there’s always a battle in the middle of the park. In the US it's a lot more about transitional play, it's up and down, very athletic, I would say they are the main differences.”

The end of the year will see O’Sullivan return to North Carolina and be part of the Courage roster for the 2021 season.