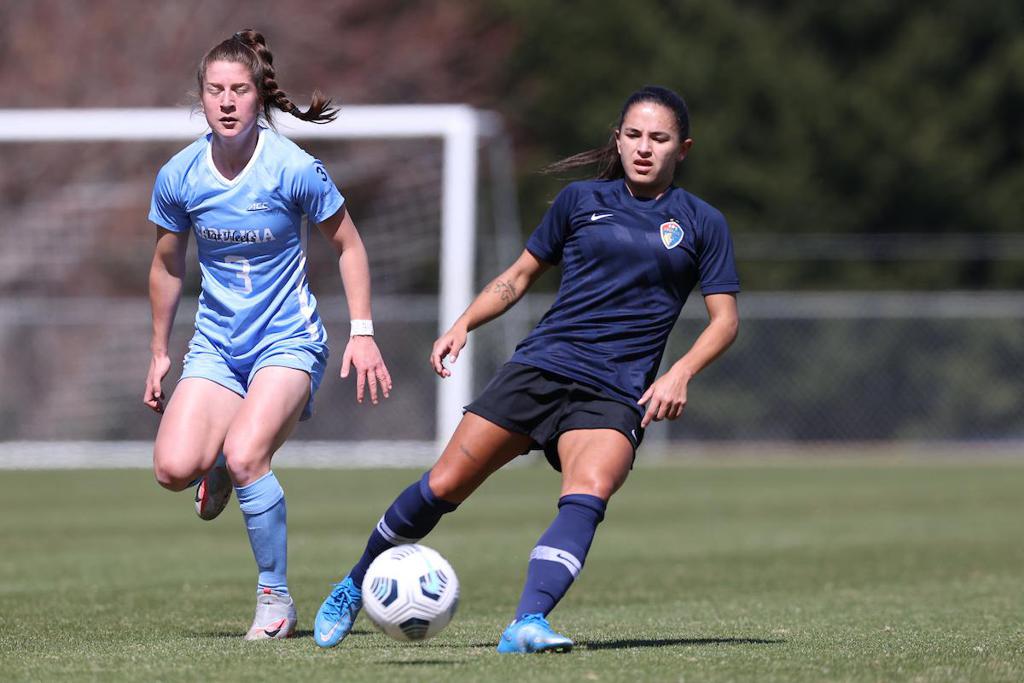 Cary, NC (March 6, 2021) - The North Carolina Courage faced off against the North Carolina Tar Heels in their second preseason scrimmage of the year on Saturday. Relying on goals from Jessica McDonald and Lynn Williams, the Courage bested the Heels 2-1 to continue their undefeated preseason. Brianna Pinto scored the lone goal for the Tar Heels.

In an attempt to break the 0-0 deadlock that ensued after 25 minutes of play, Debinha fired a shot from just inside the eighteen that was deflected off of UNC goalkeeper Claudia Dickey. The deflection fell into the path of McDonald, who netted a goal against her alma mater to put the Courage up 1-0.

Later, in the 40th minute, UNC forward Mollie Baker attempted to equalize for the Tar Heels but was denied with a diving save by Courage goalkeeper Casey Murphy. Murphy’s save would maintain the 1-0 lead for the Courage, but only for the next minute of play -- seconds later, midfielder Brianna Pinto scored the game-tying goal for the visitors. Pinto, a junior at UNC, was selected third overall in this year’s NWSL Draft by Sky Blue FC.

After a purely defensive first half, both sides entered the second half on the hunt for the go-ahead goal. That goal would nearly come from Williams, who entered the match as a second-half substitute. Cutting the ball towards her left foot, Williams took a chance from the Tar Heels’ eighteen in the 81st minute, but a deflection from Dickey and eventual clearance by the UNC defense would maintain the 1-1 score.

Fortunately for the Courage, a second chance at the go-ahead goal would arise mere minutes later when Williams intercepted a passing attempt from a UNC defender. Taking a single touch, Williams lifted a shot over the head of Dickey, who had advanced off of her line in an attempt to make the save. Williams’ goal would secure the 2-1 victory for the Courage in the 88th minute.