Merritt Mathias returned to the NC Courage lineup for the first time since her 2019 injury, scoring a goal 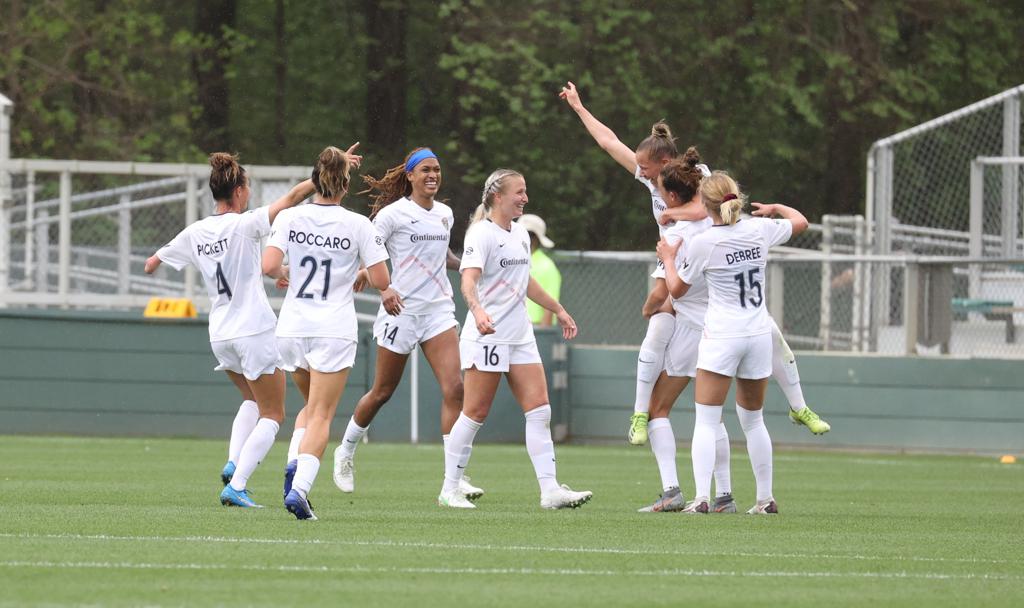 Cary, NC (April 10, 2021) - Behind a standout performance from captain Jessica McDonald, the North Carolina Courage defeated the Washington Spirit in their first match of the 2021 Challenge Cup, 3-2. Saturday’s game marked the first time in 17 months that fans were permitted to attend a Courage match at Sahlen’s Stadium due to COVID-19, with tickets selling out the day prior to the game. The win places the Courage in first place in Group A, which is made up of the Washington Spirit, Racing Louisville FC, the Orlando Pride, and NJ/NY Gotham FC.

The Spirit struck first when a Courage goal kick was intercepted by midfielder Dorian Bailey just beyond the eighteen. Upon receiving the ball, Bailey slipped a pass to Kumi Yokoyama, who took a touch towards the net and placed a shot into the lower ninety to give the visitors a 1-0 advantage in the fifth minute.

Despite finding themselves in a 1-0 deficit in the early minutes of the match, the Courage were quick to respond with an equalizer. Only five minutes after Yokoyama’s goal, Debinha lofted a ball into the path of McDonald. McDonald’s first touch took her to the goal line, where she slotted a ball toward the penalty spot, finding the feet of Kristen Hamilton. On her first touch, Hamilton buried a shot past Spirit goalkeeper Aubrey Bledsoe to tie the game at 1-1.

Later, in the 28th minute, Courage newcomer Carson Pickett played a through ball to McDonald, who took her space and dribbled into the opposition’s box. Abandoning the net in an attempt to stop the counterattack, Bledsoe was only able to get a piece of the scoring chance as McDonald’s momentum forced the ball into the back of the net to put the Courage up 2-1.

Saturday’s contest also marked the return of Merritt Mathias, who joined the Courage line-up for the first time since her ACL injury in 2019. The midfielder celebrated her return in style, receiving a pass upfield from Hailie Mace and chipping a shot over the head of Bledsoe to extend the Courage’s lead to 3-1 early into the second half.

The Spirit answered Mathias’ goal with a goal of their own, scored by Trinity Rodman in her National Women’s Soccer League debut to bring the score to 3-2. Rodman, who was selected second overall in this year’s NWSL Draft at only 18 years old, forewent her collegiate season at Washington State University to pursue her professional career.

Despite the Spirit’s best efforts to equalize, the Courage held onto their 3-2 lead throughout the remainder of the second half to seal their first victory of both the 2021 season and the Challenge Cup.

Up Next: The North Carolina Courage will travel to face NJ/NY Gotham FC on Tuesday, April 20th at 6:00 p.m. ET at MSU Soccer Park in Montclair, New Jersey to continue the group stage of the Challenge Cup.