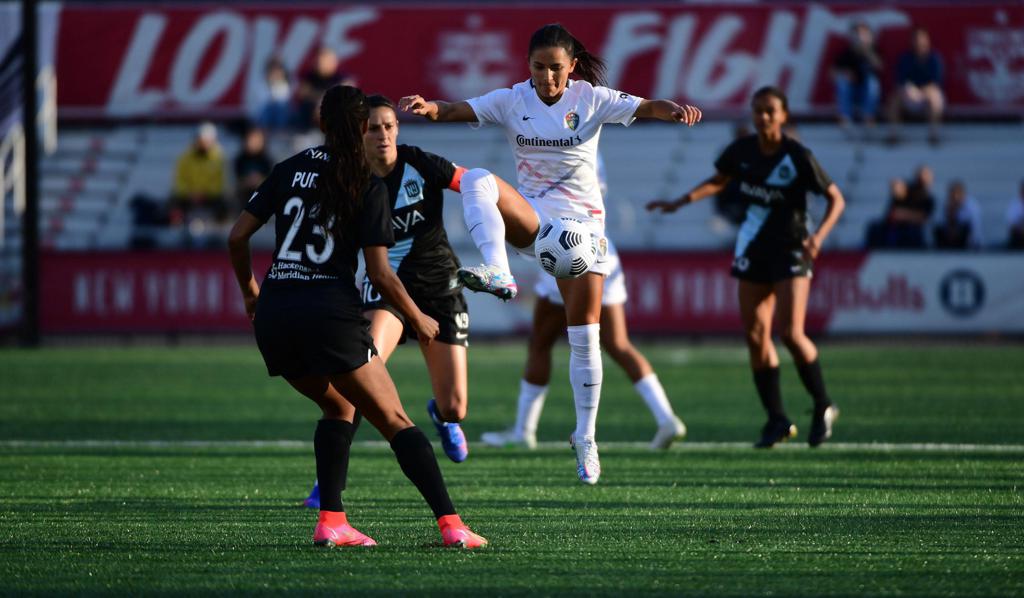 MONTCLAIR, NJ (April 20, 2021) - A hard-fought battle ensued as the North Carolina Courage and NJ/NY Gotham FC took to the pitch during the group stage of the 2021 Challenge Cup presented by Secret Deodorant. Despite their tenacity throughout the full 90, the Courage fell to their opponent 4-3 in the final minutes of stoppage time. Jessica McDonald added a goal to her Challenge Cup tally and Debinha recorded the brace, with seven goals scored between the two teams throughout match play.

An outright score fest would be the highlight of the first half, with Gotham FC drawing first blood on a breakaway by forward Midge Purce. The attack began with a pass from the Gotham defensive third, one that Purce would receive in stride and dribble upfield for a scoring chance. Though Casey Murphy was able to get a piece of the shot, Purce would convert the chance to put Gotham up 1-0 in the 18th minute.

The Courage answered with a goal of their own, as Debinha slipped a pass out wide to McDonald. Beating a defender and cutting the ball to her left foot, McDonald played in a cross that deflected off of Gotham’s Jennifer Cudjoe and to the feet of fellow defender Mandy Freeman. A poor clearance attempt from Freeman would land in the path of Debinha, who buried her first goal of the Challenge Cup to equalize for the Courage in the 21st minute.

Two minutes later, it was McDonald on the ball again, this time running onto a pass from Lynn Williams. Taking a single touch, McDonald didn’t hesitate to show off her passing precision, placing a ball across the box and hitting Debinha on the far post. Debinha would add her second goal of the night to give the Courage a 2-1 lead with 23 minutes gone.

The Courage’s lead would be temporary, as a streaking run down the right sideline from Paige Monaghan was just enough to slot a cross to Purce. On her first touch, Purce tapped in another to tie the game at 2-2 in the 26th minute, but not without some deliberation as to whether the goal was on-side. Later, in the 31st minute, Gotham captain Carli Lloyd notched a goal to render the score 3-2 in favor of the home team to end the first half. Lloyd, who has not appeared in a match for Gotham FC since 2019, recently celebrated 300 caps with the US Women’s National Team.

Not to be left out of the scoring was McDonald, who flicked a header over the fingertips of Gotham goalkeeper Didi Haracic to tie the game at 3-3 early into the second half. Adding her name to the scoresheet for a second consecutive match, McDonald has now had a hand in five of the six goals scored by the Courage during the Challenge Cup.

Despite the Courage’s best efforts to score a go-ahead goal, it was Gotham who would come out on top as Evelyne Viens converted a close-range attempt in the final minutes of stoppage time to win the match for the home team, 4-3. The Courage will look to return to their winning ways against Racing Louisville FC next Monday.

“[Jessica McDonald] is certainly the bright spot for us right now. I’m happy that she is scoring goals and getting assists. We now just need to figure out the other end of the field and stop conceding goals the way we are.” – Paul Riley

“Without Abby [Erceg], on the back line we lose a lot of leadership, but we need to sort out a way to get comfortable without her and move forward.” – Meredith Speck

Up Next: The North Carolina Courage will travel to face Racing Louisville FC on Monday, April 26, at 6 p.m. ET at Lynn Family Stadium in Louisville, KY, to continue the group stage of the Challenge Cup.