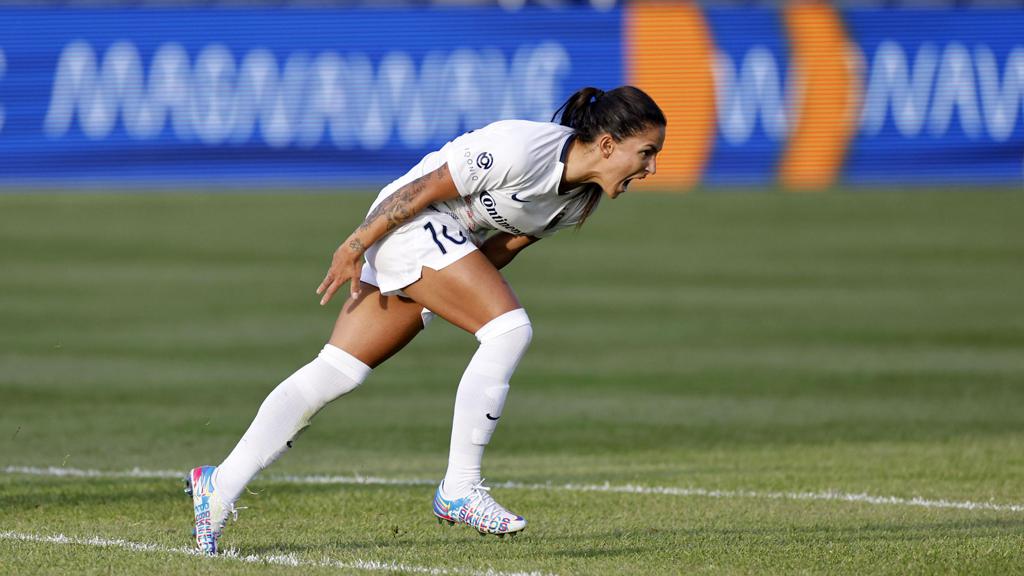 LOUISVILLE, KY (April 26, 2021) - The North Carolina Courage returned to their winning ways on Monday night, defeating expansion team Racing Louisville FC 3-2 in the final minutes of match play. With the win, the Courage now boast six points, edging into second place in Challenge Cup standings with a 2-0-1 record. Goals from Kristen Hamilton and Debinha would lift the Courage over their opponent, with an own goal sealing the victory.

Following a largely defensive start to the first half, Racing Louisville bagged the first goal of the match when a clearance by the Courage defense was intercepted by Erin Simon just outside of the eighteen. Receiving the ball at her feet, Simon played in a cross that found the head of forward CeCe Kizer, who scored to give Louisville a 1-0 advantage in the 24th minute.

Nearly tying the game in the 31st minute, a goal by Lynn Williams was determined to be offside and subsequently called back, maintaining Louisville’s 1-0 lead. The deficit would be temporary, however, as the Courage would convert an equalizer when awarded a corner kick just two minutes later. The corner would be taken by Debinha, who started the play by tapping in a short pass to Carson Pickett. On her first touch, Pickett sent in a cross that met Kristen Hamilton in the air. Redirecting the ball with a calculated header that grazed the back post, Hamilton tallied her second goal of the tournament to equalize for the Courage, deadlocking the score at 1-1.

Raring to take the lead from the start of the second half, the Courage offense continued to assert their dominance with an attack that began with Lynn Williams. In a true show of her agility on the ball and composure in the attacking third, Williams left a defender in her wake as she played in a cross intended for Jessica McDonald that was instead cleared by the Louisville defense. The weak clearance attempt was ultimately won back by McDonald, who slotted a pass to Debinha outside of the eighteen. Taking a single touch, Debinha buried a shot into the upper ninety to give the Courage the upper hand in the 57th minute, 2-1.

Louisville forward Jorian Baucom would equalize for the home team in the 75th minute, flicking in a cross from Kizer to tie the game once again, this time at two goals apiece. Persistent effort from Courage offensive talents Williams and Debinha would pay off just ten minutes later when Williams laid a ball off into space for Debinha in the box. Immediately, Debinha fired off a shot attempt that was initially deflected by Louisville keeper Michelle Betos. Unfortunately for Betos, the save would ricochet off a defender and result in an own goal, with Debinha there to ensure the game-winner ended up in the back of the net.

Paul Riley’s team will look to remain in the win column as they return home to take on the Orlando Pride this Saturday.

Denise O’Sullivan  on the defensive struggles:

"I think we have new players, and there are new pieces all over the pitch. There is still time for us to gel. It is important that we make those players feel comfortable, welcome, and help them as much as we can."

"I think for our team is never been about the result, Paul will be the first one to tell you that. He never talks about playoffs, he never talks about the end of the season, he never says we need to win. It’s always about how we go out and perform, and I think we are all a little disappointed about the performance in the game tonight. We just can be better, we are so sharp at practice, that we need to transition that to the game."

"Debinha is in peak form, she has been playing very good football, scoring goals and creating assists. I would like to see Lynn get a couple of goals. Jess is in pretty good form, and [Hamilton] did well too."

Up Next: After a brief stint on the road, the North Carolina Courage will return to Sahlen’s Stadium at WakeMed Soccer Park on May 1 at 7:30 p.m. ET to face off against the Orlando Pride in the final match of the Challenge Cup group stage.