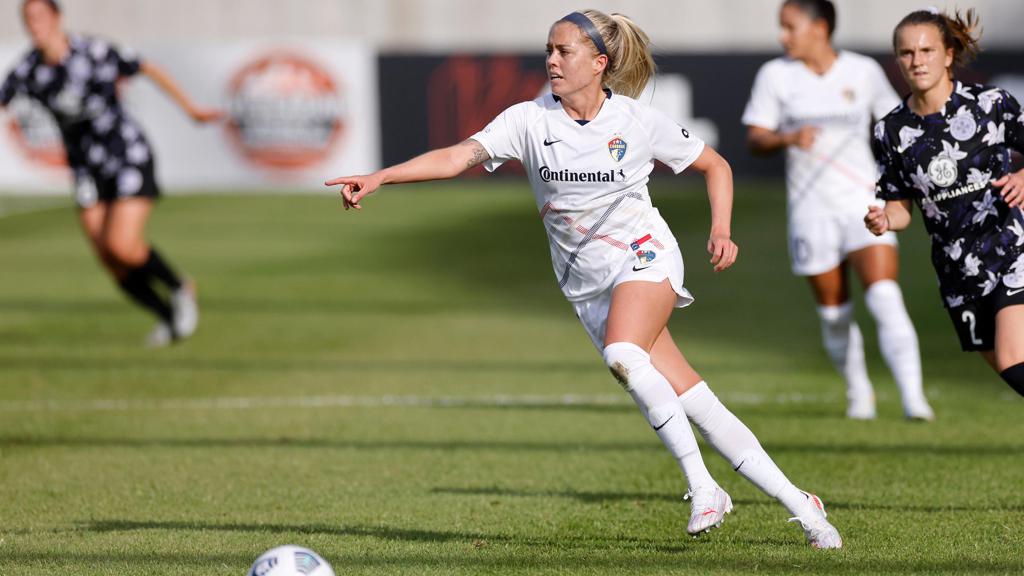 Cary, NC (April 29, 2021) - The North Carolina Courage return to their home turf on Saturday to host the Orlando Pride in their final match of group play in the 2021 NWSL Challenge Cup presented by Secret Deodorant.

Saturday’s match is the Courage’s fourth of the tournament, and the team currently holds a 2-1-0 record in their Challenge Cup campaign. This game is a must-win for the Courage to keep their chances of advancing to the 2021 NWSL Challenge Cup final on May 8.

Where to Watch: CBS Sports Network

Players to Watch presented by Jublia

Courage midfielder Denise O’Sullivan has brought an instant spark to the North Carolina line-up following her return from national team duty with the Republic of Ireland. Despite missing the Courage’s first match of the 2021 Challenge Cup, O’Sullivan has started and played every minute of the last two games. The 27-year-old currently logs an 88% passing accuracy rate, showcasing her impressive ability to maintain possession and create dangerous opportunities for her team on the attack. With five years of NWSL experience, O’Sullivan brings a confident presence to the Courage midfield. The Cork, Ireland native is a proven leader for the Courage, as she was voted Team MVP by her teammates in 2019.

Orlando Pride goalkeeper Ashlyn Harris has had a stand out performance in the 2021 Challenge Cup so far. With two heroic penalty saves in back-to-back matches, the 35-year-old World Cup Champion has been a rock in the back for the Pride. Following Orlando’s 1-0 win over the Washington Spirit, Harris was named Budweiser’s Player of the Week and earned NWSL’s Save of the Week, as a result of her incredible showing with nine saves, a penalty stop and a clean sheet. The UNC-Chapel Hill alumna will return to the Triangle area with her Orlando side to take on the Courage and bring a nearly impenetrable presence on the goal line.

The North Carolina Courage returned to their winning ways on Monday night, defeating first-year expansion team Racing Louisville FC 3-2 in the final minutes of match play. With the win, the Courage now boast six points and are sitting in third place in the Challenge Cup standings with a 2-1-0 record.

In Monday’s match, Louisville was first on the board when a cross from defender Erin Simon found the head of teammate and forward CeCe Kizer in the 24th minute. Courage striker, Lynn Williams nearly tied the game in the 31st minute, but was determined to be offside. Two minutes later, a short pass from Debinha found Carson Pickett, who sent in a cross, meeting the head of Kristen Hamilton who found the back of the net. Hamilton tallied her second goal of the tournament to equalize for the Courage, deadlocking the score at 1-1.

In the 57th minute of the match, Debinha took a single touch off a pass from Jessica McDonald and buried a shot into the upper 90 to give the Courage the upper hand. However, Louisville forward Jorian Baucom equalized for the home team in the 75th minute, but the offensive talents of Williams and Debinha paid off just ten minutes later when Williams laid a ball off into space for Debinha in the box. Debinha fired off a shot that was initially deflected by Louisville keeper Michelle Betos but the save ricocheted off a defender and resulted in an own goal.

"I think for our team it has never been about the result, Paul will be the first one to tell you that,” Kristen Hamilton said. “He never talks about playoffs, he never talks about the end of the season, he never says we need to win. It’s always about how we go out and perform, and I think we are all a little disappointed about the performance in the game tonight. We just can be better, we are so sharp at practice, that we need to transition that to the game."

The North Carolina Courage will look to compete for a third NWSL Championship and fourth NWSL Shield when they kick off the 2021 NWSL regular season on May 15, hitting the road against the OL Reign at Cheney Stadium in Tacoma, WA. The team will then return to Sahlen’s Stadium at WakeMed Soccer Park on Saturday, May 22 for their home opener against the Orlando Pride at 7 p.m. ET.