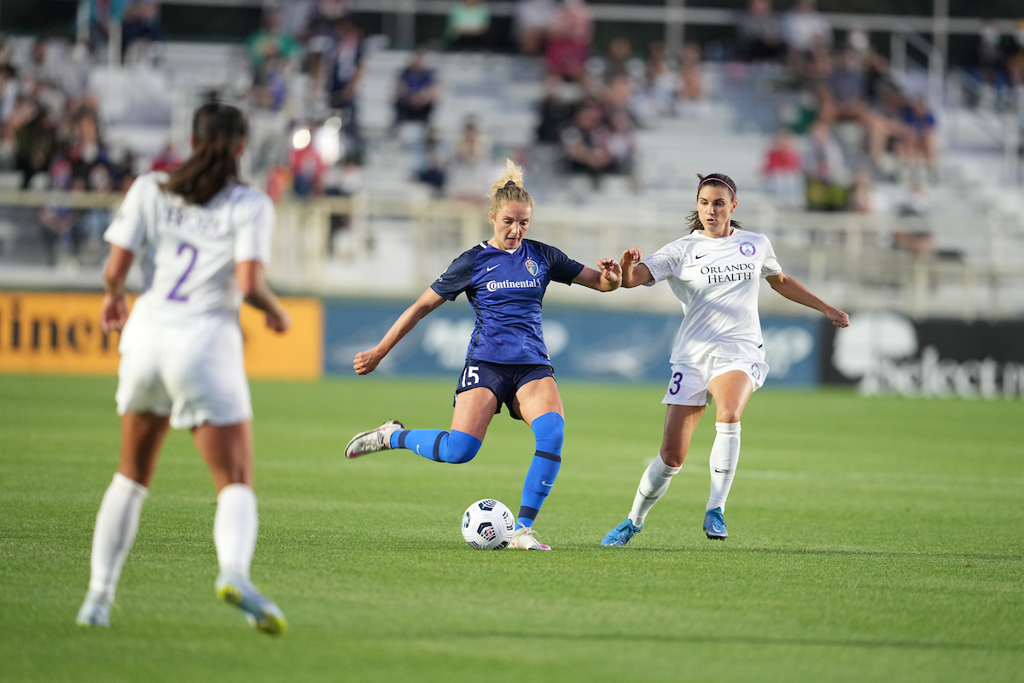 Cary, NC (May 1, 2021) - Following a hard-fought match between the North Carolina Courage and the visiting Orlando Pride, Saturday night’s contest concluded in a 0-0 draw. Standout defensive performances from Carson Pickett and goalkeeper Casey Murphy rendered the Pride scoreless throughout the game, as the Courage earned a point and concluded the group stage of the 2021 Challenge Cup, presented by Secret Deodorant, with a 2-1-1 record.

The first half was marked with a flurry of scoring chances for the Courage, several of which relied on the efforts of Pickett, Lynn Williams and Debinha. One of the most notable chances of the half came in the 29th minute, when Pickett lofted a corner kick into the Pride box, finding Williams in the air. Redirecting a header towards net, Williams’ attempt sailed just over the crossbar, maintaining the 0-0 deadlock. Meanwhile, defenders Kaleigh Kurtz, Schuyler DeBree and midfielder Hailie Mace kept attacks from Pride forwards Sydney Leroux and Alex Morgan at bay to render the visitors scoreless through 45 minutes of play.

The Courage entered the second half eager to score and nearly getting their chance in the 59th minute when Pickett lifted a ball into the box, narrowly missing the head of Williams. The cross was then punched out by Pride goalkeeper Ashlyn Harris, marking the demise of a promising Courage attack. Later, in the 66th minute, Pickett played in another ball that sailed across the face of the net, landing in the path of Debinha at the far post. On her first touch, Debinha fired off a shot just wide of the right post and out of bounds.

In the 72nd minute, a pass from Leroux made its way to Morgan across the face of the Courage goal. Settling the ball, Morgan got a shot off from close-range, but no dice for the opposing side as Pickett’s presence at the near post blocked the attempt, a fervent reminder of the value that the Courage newcomer adds to the North Carolina backline.

“I thought we controlled a lot of the ball and I felt like we had a lot of momentum, especially before halftime,” Carson Pickett said. “We worked on our defending all week so I felt like that was much improved — it was good to get a clean sheet. Our forwards are amazing and they’re going to finish so many goals and get in deep every time. It was a really good team performance and it’s good going into the regular season.”

Despite the Courage’s best effort to gain the upper hand throughout the match, they were unable to find the goal as the final minutes ticked away. Factoring in the draw, the Courage sit in second place in Group A with seven points, finishing the group stage of the Challenge Cup with a 2-1-1 record. Should NJ/NY Gotham FC lose to Racing Louisville FC by two or more goals tomorrow afternoon, the Courage will advance to face the Portland Thorns in the Challenge Cup championship match.

“I told the broadcast folks yesterday that it was going to be a goal fest, and boy I was completely wrong on that one,” Head Coach Paul Riley said. “There were two good teams going at it tonight. We missed some huge chances. But I’m happy with the work rate tonight and the performance. The result doesn’t count at this stage of the season. But I am much happier today than I was last week.”