Ratcliffe brings five years of NWSL experience to the club 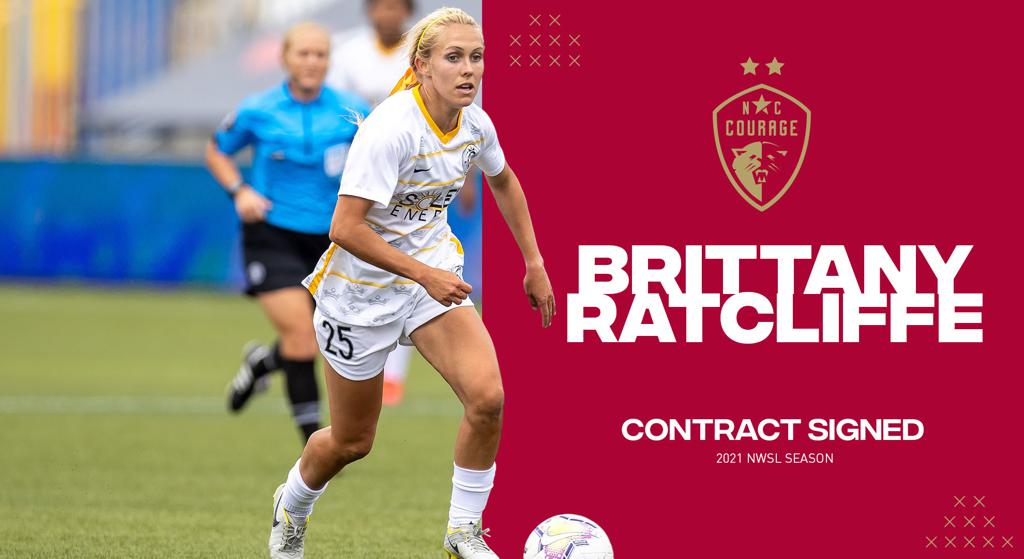 The North Carolina Courage announced today that forward Brittany Ratcliffe has signed a one-year contract with the club, with a one-year option. Ratcliffe was previously on the 2021 NWSL expansion team, Kansas City NWSL, where she made one appearance in the club’s inaugural match. The 27-year-old striker brings five years of NWSL experience to the club.

Following her four-year career at the University of Virginia, Ratcliffe was drafted 17th overall in the 2016 NWSL Draft by the Boston Breakers, where she appeared in 15 games before heading to FC Kansas City for the 2017 season. In Kansas City, Ratcliffe tallied one goal and two assists in her 22 appearances with the club.

In November 2017, FC Kansas City ceased operations and the team was relocated to expansion side, Utah Royals FC. Ratcliffe spent the next three seasons in Utah, where she scored two goals in her 10 appearances with the Royals in 2018. Ratcliffe was sidelined in 2019 due to an ACL injury, but returned to play in 2020 where she started and played all five 2020 NWSL Challenge Cup matches and all four NWSL Fall Series games for Utah.

In December 2020, the league announced Utah would cease operations and all team-assets would be transferred to expansion team, Kansas City NWSL led by a new ownership group.  Ratcliffe was waived by Kansas City earlier this month.

In other player news, after being signed as a National Team Replacement Player in April, Peyton Perea will remain with the team through the end of the 2021 season. The 24-year-old Wake Forest graduate started 53 games for the Demon Deacons and had 12 goals and five assists in her college career. Most recently, Perea started three matches and logged 340 minutes for the Courage in the 2020 NWSL Fall Series.

The Courage kick off their 2021 NWSL Season on the road against OL Reign on Saturday, May 15 at 10:00 p.m. ET. The team returns home to face the Orlando Pride on Saturday, May 22 at 7:00 p.m. ET. Tickets for the NC Courage regular season home opener go on sale Wednesday, May 12 at 10:00 a.m. More information on season tickets can be found here.