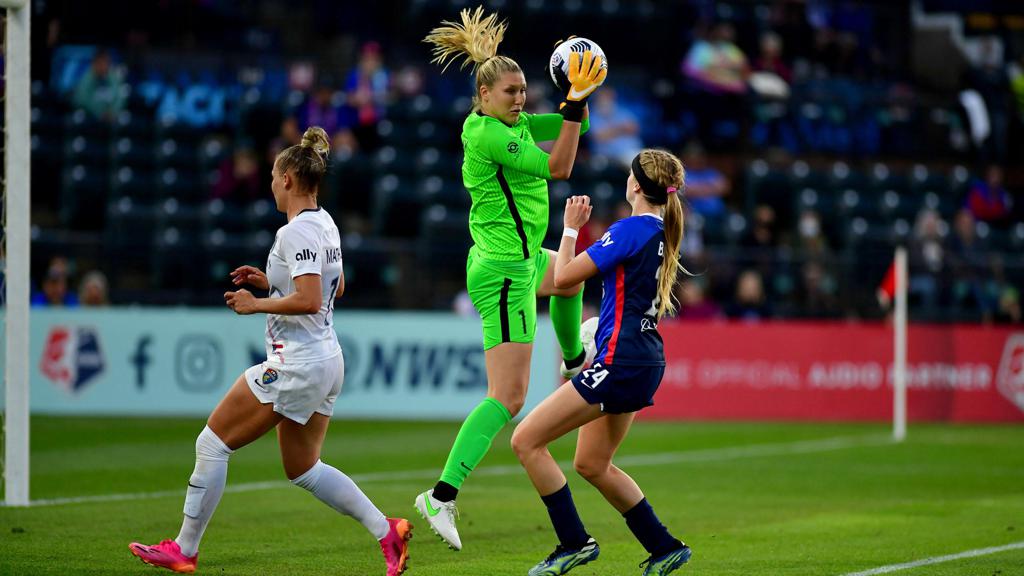 TACOMA, WA (May 15, 2021) – The North Carolina Courage opened the 2021 NWSL Regular season at Cheney Stadium in Tacoma, WA, Saturday night with a scoreless draw against OL Reign. This first game of the season saw Courage goalkeeper Casey Murphy return to her former club for the first time since being acquired by North Carolina last year.

The first chance for the Courage came early in the second minute of play when defender Carson Pickett served a cross onto the head of captain Abby Erceg, who nearly found the net with a ball off the crossbar. Saturday’s contest marked Erceg’s first appearance since sustaining a back injury earlier this year.

“It's the intangibles she brings,” Head Coach Paul Riley said. “She just makes everyone better around her. She is someone they can all rely on and she helps the group enormously. She was brilliant in the air and her distribution was great, clean as a whistle tonight.”

The second half kicked off with several solid attempts on goal from both the Courage and the Reign, but the squads’ respective keepers kept things knotted at zero. In the 56th minute, Courage striker Kristen Hamilton found an opening in front of the box and let a shot rip, but no dice. Three minutes later, midfielder Havana Solaun found an opening at the top of the box to chip a shot on frame, but the opportunity was saved by Reign keeper Karen Bardsley.

OL Reign midfielder Megan Rapinoe tried to capitalize on a dangerous chance in the 69th minute with a powerful shot that slipped past Courage keeper Casey Murphy’s reach, but the ball found the post instead of the net and play went on.

Murphy came up big time and time again for the Courage, but had a truly heroic moment in the 74th when she slid to save a shot and recovered immediately to stop a second attempt.

“She feels like a brick wall back there, she is an amazing player and person, and I trust her so much,” Carson Pickett said. “She is just incredible, and I can see her having a great season. So much more to come from her.”

With 15 minutes remaining in the match, Cari Rocarro and newcomer Brittany Ratcliffe entered the game to bring an energetic spark to the Courage midfield. Saturday’s match at Cheney Stadium was Ratcliffe’s first since signing with the Courage earlier this week.

As the minutes waned, Jessica McDonald displayed her aerial dominance with a dangerous header off of a corner, sending the ball just over the top of the net. The final chance for Courage in stoppage time saw a cross in by Ratcliffe to the head of Kristen Hamilton who attempted to bring it down to a volley, just mis-hitting the shot to send it wide.

“Honestly, I thought it was one of our best performances so far,” Pickett said. “We are really starting to gel, and I think we are in a good place to keep growing into the season.”

The North Carolina Courage will head back to Cary for their first home match of the 2021 NWSL regular season against Alex Morgan and the Orlando Pride, and tickets are now available here. More information on the club's expanded seating capacity can be found here.