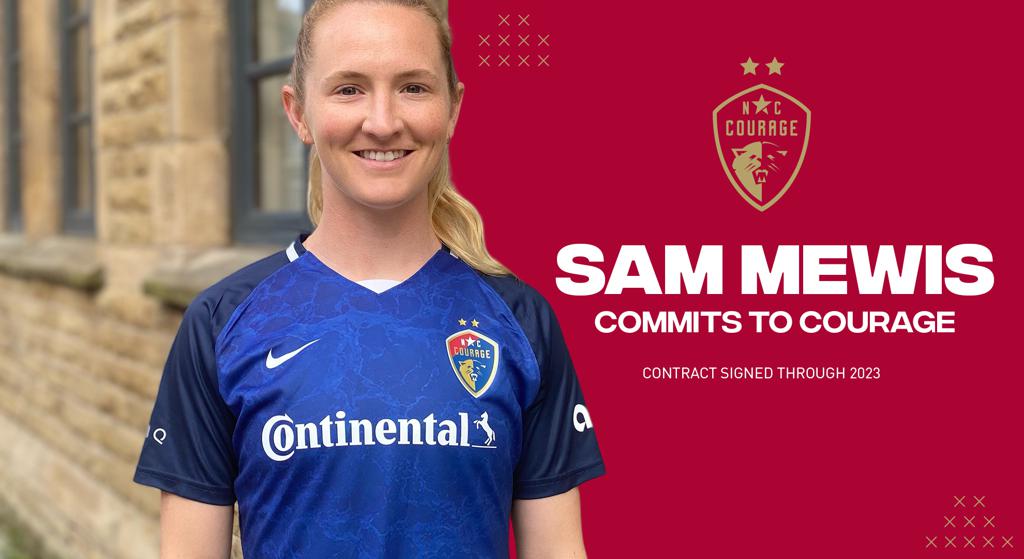 Cary, N.C. (May 17, 2021) - The North Carolina Courage are thrilled to announce Sam Mewis, 2020 U.S. Soccer Female Player of the Year, is returning to the club as a U.S. allocated player for the 2021 season. Additionally, Mewis has signed a two-year contract keeping her with the Courage through the 2023 campaign. The club used allocation money to complete the new contract.

Mewis brings an arsenal of world-class talent and experience back to Courage Country, from earning five major trophies with the NC Courage, to winning the FIFA World Cup with the US Women's National Team, to dominating on the European stage with Manchester City. Mewis’ return to the Courage is a testament to the world class daily training and development environment of the club. The midfielder is expected to be available for North Carolina’s match on Friday, May 28 against Racing Louisville FC.

“I am so thankful and excited to have the opportunity to return to North Carolina after my time overseas,” Mewis said. “I feel like I am coming home to a team where I know I will be both embraced and challenged. Everyone at the Courage has been supportive of me and my journey over the past several months and I’m extremely grateful for the experience that I’ve had in Manchester. I cannot wait to play in front of the Courage fans again and to do my very best to help us win.”

In August of 2020, Mewis inked a contract with Manchester City following her performance in the 2020 NWSL Challenge Cup. The Courage retained Mewis’ rights as she went overseas to compete in the FA Women’s Super League, playing in 17 matches, logging 1,147 minutes, scoring seven goals and assisting two more for Manchester City. In the Women’s FA Cup Final, Mewis scored the opening goal of the match, becoming the third U.S. international in history to score in an FA Cup Final, and contributing to City’s 3-1 victory over Everton. Mewis also appeared in six Champions League matches, notching 396 minutes and five goals.

Mewis made her mark as a world class player in her three seasons with the Courage, appearing in 53 games, scoring 11 goals, and leading the Courage to two NWSL Championships, three consecutive NWSL Shields, and a Women’s ICC Championship title. She won an additional NWSL championship with the Western New York Flash before the team relocated to North Carolina. In 2017, Mewis was named to the NWSL Best XI and was a finalist for the NWSL Most Valuable Player Award. In the 2020 NWSL Challenge Cup, she recorded a goal and an assist to lift the Courage to four straight wins in the preliminary rounds and the number one seed going into knockout play.

“Sam has been one of the juggernauts that has driven our success at the club,” Courage Head Coach Paul Riley said. “She has matured into one of the most inspirational and talented players in the game. To have her back in Courage Country shows the clubs desire to remain at the top. With her ability to penetrate with the ball, her range of passing and her tactical acumen, she has the ability to control the tempo and completely influence games. Her presence in the locker room will be an emotional lift for the entire squad and, most importantly, Sam will bring out the best in other players. Our league has the parity and our club has the environment to bring out the best in Sam and continue her development into the most influential midfielder in the game. I’m excited to push and challenge Sam to reach new levels and give our club the boost required to attack the NWSL Championship.”

On the international stage, Mewis has made 72 appearances for the US Women’s National team, scoring 21 goals and tallying seven assists for her country. As a pillar of the 2019 FIFA World Cup Champions roster, Mewis helped her United States side bring home the title for the fourth time with a 2-0 win over the Netherlands in the final. Last year, Mewis appeared in eight matches for the States, notching four goals in the process -- two against Costa Rica, and two against Mexico.

As a result of Mewis’ dominance with the U.S. Women’s National Team, the North Carolina Courage, and Manchester City, the midfielder was named the 2020 U.S. Soccer Female Player of the Year in December. Mewis was one of five finalists for the award and earned 45% of the vote to receive the honor. The Hanson, MA native was also named the Best Women’s Player by ESPN FC in late March of this year, ranking #1 on a list of 50 of the world’s best female soccer players.

“We are thrilled to welcome Sam back home of course,” North Carolina Football Club President and GM, Curt Johnson said. “But more importantly, she is putting down roots by signing a long-term agreement and that speaks volumes about her commitment to the Courage. Sam is a special person, player, and leader and she has been instrumental in establishing the special culture that now exists within the Courage team and more broadly in the entire Club. Sam returns committed to helping us improve and reach our full potential and I know she will help lead the way.”

The Courage will host a virtual press conference with Mewis and Head Coach Paul Riley, along with a virtual fan Q&A event with the returner in the coming weeks. More details to come on these events and how to attend. Sam Mewis’ jersey, as well as all other Courage merchandise and customizable team gear, is available for purchase here.

Tickets to the NC Courage 2021 NWSL Regular Season home-opener vs. Orlando Pride on Saturday, May 22, as well as their match on Friday, May 28 vs. Racing Louisville FC are available here. Learn more about North Carolina Football Club’s expanded seating capacity here. For more information on becoming a Courage season ticket holder, call 919-459-8144 or email tickets@northcarolinafc.com.