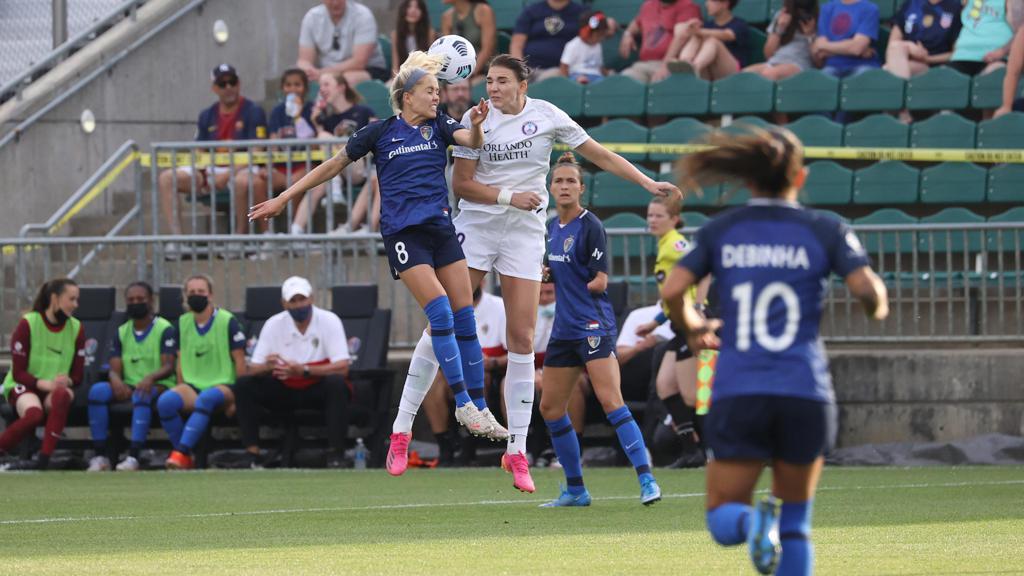 CARY, NC (May 22, 2021) - The North Carolina Courage fell to the Orlando Pride 1-2 on Saturday night, with Jessica McDonald notching her first goal of the regular season in tonight’s contest and Lynn Williams finding the assist. Though a valiant effort to equalize highlighted the final minutes of the match for the Courage, the group came up short of their fellow East Coast opponents. Denise O’Sullivan earned Budweiser Player of the Match honors for her standout performance in the midfield.

In the opening minutes, an impressive save from Casey Murphy served to pick off Pride forward and USWNT star Alex Morgan, maintaining the 0-0 deadlock after four minutes of play. The Courage had a flurry of chances then as Carson Pickett sent in a cross to find McDonald in the box — but no dice as Erin McLeod emerged off of her line to intercept the attempted assist in the 11th minute.

Murphy added another key save in the 14th minute, keeping Marta from converting on a breakaway. Later, in the 28th minute, a chance from Debinha sailed just over the crossbar, elongating the 0-0 score. Following a largely defensive 36 minutes of play for both sides, Sydney Leroux drew first blood for the Pride, providing the visitors with a 1-0 advantage. Morgan added the Pride’s second goal of the match in the 79th minute, working her way to the goal line and converting from close range.

Pickett sent a long ball into the box that was headed up by a Pride defender. In the chaos that followed, Williams was able to win the ball out of the air, redirecting a header to the feet of McDonald. With a defender on her back, McDonald’s first touch allowed her to turn on the ball and slot a goal into the lower ninety to cut Orlando’s lead in half in the 89th minute.

Through five minutes of stoppage time, the Courage worked desperately for an equalizer, testing McLeod several times as the clock wound down. Despite their shared urgency in the second half, Paul Riley’s team fell to the Orlando Pride 1-2 and will look to add to the win column against league newcomer Racing Louisville FC next Friday, May 28 at 7 p.m. ET.

NC Courage Forward Jessica McDonald: “To be honest, I thought we were absolutely immaculate in the second half...we created a lot of chances that we should have put away but we obviously failed to do so and that’s a little frustrating, so obviously we’re gonna grow from the mistakes today.”

NC Courage Head Coach Paul Riley: “We shot ourselves in the foot, I thought in the second half we were brilliant and really took the game to them. I thought Denise O’Sullivan was excellent on the day, and Debinha was also a handful tonight.”

“It’s tough to play against them, they’re direct and can play directly over our midfield, over our press. They’ve changed their philosophy completely from two years ago, when they were trying to play out from the back all the time.”

“We’ve scored one goal in three games, we’re not producing enough in that final third yet... until we start going all guns blazing we’re gonna struggle. If we play like we did in the last 20 minutes for the full 90, we’re gonna win some games...It was certainly better than last time out against Orlando in the NWSL Challenge Cup.”

Next Match: The North Carolina Courage will continue their home stint at Sahlen’s Stadium at WakeMed Soccer Park to take on Racing Louisville FC on Friday, May 28th at 7 p.m. ET.