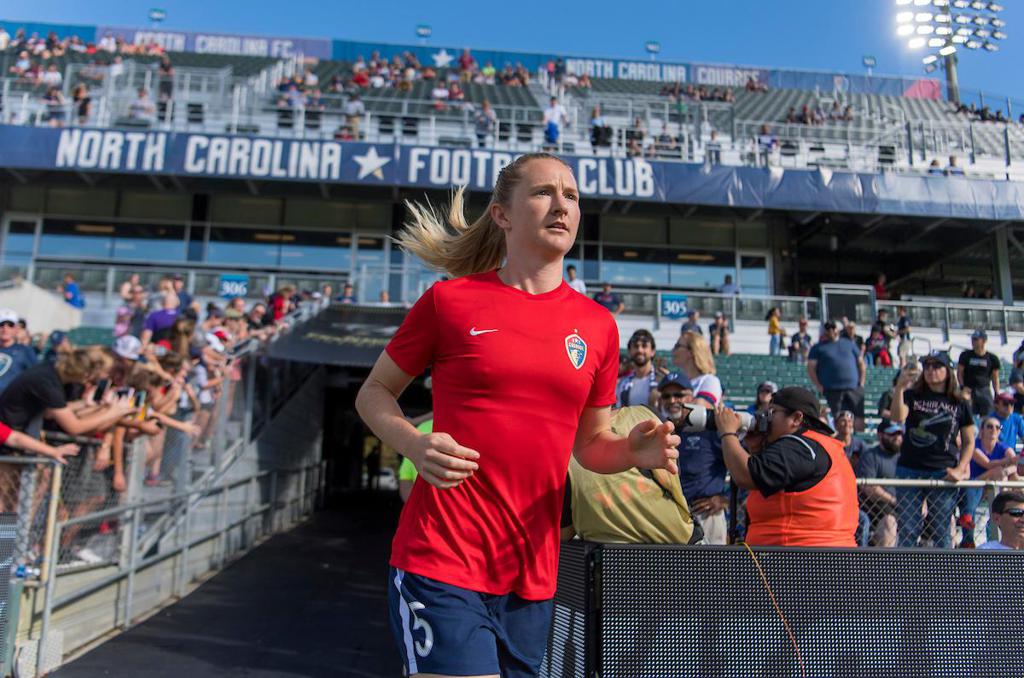 CARY, NC (May 26, 2021) - The North Carolina Courage will look to add their first win of the season against league newcomer Racing Louisville FC on Friday, May 28 at 7 p.m. ET at Sahlen’s Stadium at WakeMed Soccer Park. Friday’s contest marks the long-awaited return of Sam Mewis, who spent the remainder of the 2020-2021 season with Manchester City in the FA Women’s Super League. Mewis signed a contract to play with the Courage through 2023. Tickets are currently available for the match on TicketMaster.

The last meeting between the two teams took place during the 2021 Challenge Cup, in which the Courage came out on top, 3-2, due to goals from Kristen Hamilton and Debinha. An own goal was ultimately Louisville’s demise, with Debinha there to ensure the game-winner ended up in the back of the net. Cece Kizer and Jorian Baucom each tallied a goal for Louisville.

Players to Watch presented by Jublia:

Returning to the Courage for the first time since last year’s Challenge Cup, Mewis will look to assert her dominance as one of the best midfielders in the league. The combination of her lethality in the air, passing precision, and quickness on the ball will surely be a challenge for the Louisville defense. Now reunited in the midfield with Debinha and Denise O’Sullivan, Mewis will look to put the league on notice with her return to the National Women’s Soccer League.

A force on offense for the league’s newest squad, Kizer scored two goals during the Challenge Cup (one of which was against the Courage) and has scored one goal in two matches during the regular season. Thus far, the forward has posted a 100% success rate in tackles and a 73.8% passing success rate, completing 31 of 42 attempted passes. Called a “hidden gem” by Racing Louisville head coach Christy Holly, Kizer will look to add her name to the scoresheet during Friday’s competition.

The Courage fell to the Orlando Pride 1-2 last Saturday despite a hard-fought battle between the two teams throughout the entirety of the match. Jessica McDonald tallied her first goal of the season in the 89th minute, with Lynn Williams adding the assist. With that assist, Williams is now the all-time assist leader in the NWSL during the regular season with 25 total assists. In the five minutes of added stoppage time, the Courage worked desperately for an equalizer, testing Pride goalkeeper Erin McLeod several times as the clock wound down, but fell just short of their opponents as the final whistle blew.

The North Carolina Courage will hit the road to face the Chicago Red Stars on Saturday, June 5 at 3 p.m. ET at SeatGeek Stadium in Bridgeview, Illinois.