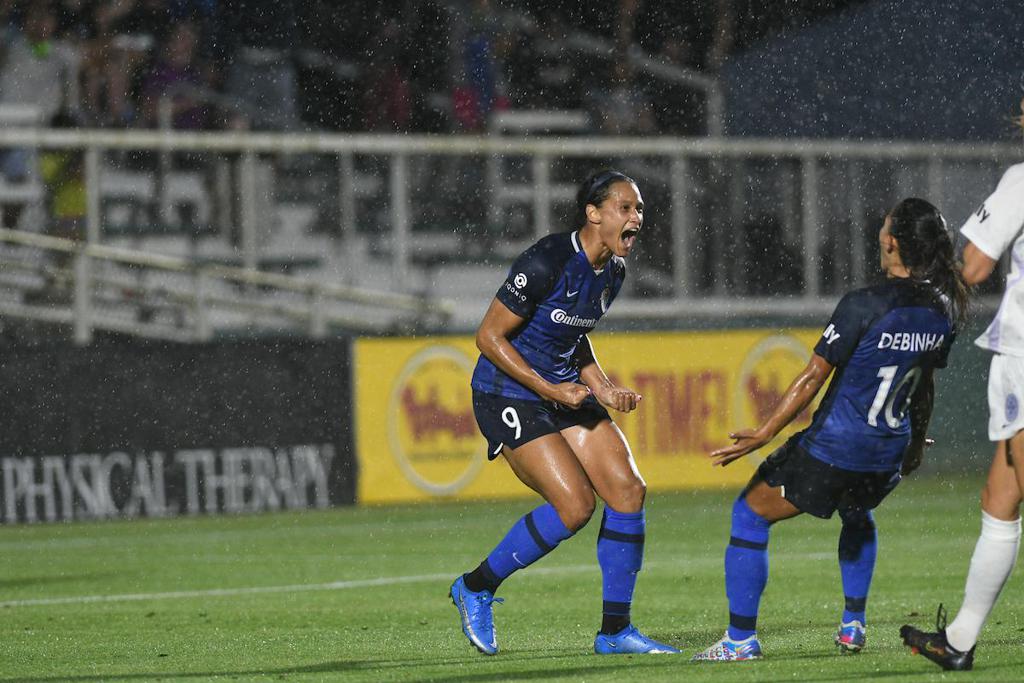 CARY, NC (May 28, 2021) - The North Carolina Courage recorded a dominant win over Racing Louisville FC on Friday night, besting their opponent 5-0 behind goals from captain Abby Erceg, Lynn Williams, Debinha, and Hailie Mace. With the win, the Courage have advanced to second overall in league standings, posting a 1-1-1 record and four points. Following tonight’s victory, Paul Riley’s team will look to continue their winning ways on the road against the Chicago Red Stars next Saturday.

Tonight’s match also marked the much-anticipated return of Sam Mewis, who appeared for the Courage for the first time since heading abroad to play for Manchester City in August of 2020. Mewis was a member of the starting lineup and saw 70 minutes of playing time in tonight’s contest, rejoining teammates Debinha and Denise O’Sullivan in the midfield to lift the Courage to a commanding win over Louisville.

Drawing a corner kick in the 7th minute, the Courage received one of their first scoring chances of the match. Carson Pickett took the kick, lofting a ball into the box and finding the head of Erceg at the far post. Challenging the Louisville defense in the air, Erceg was able to redirect the ball towards the net, sending the header past the fingertips of goalkeeper Michelle Betos and into the upper ninety. The goal was Erceg’s first of the season, giving the Courage the upper hand in the opening minutes of the match, 1-0.

In the 63rd minute, Debinha threaded a through ball into the box for Lynn Williams. Taking the pass in stride, Williams took an extra touch, leaving a defender in her wake and burying a shot into the lower ninety to bag her first goal of the season and extend the Courage lead 2-0. Five minutes later, a header from McDonald made its way across the face of the Louisville net for an easy tap-in from Debinha to put the Courage up by three.

The Courage added a fourth goal in the 75th minute courtesy of Hailie Mace, who entered the match as a second-half substitute. Receiving a slot pass from Debinha, Mace opened up with her first touch and fired off a shot from well beyond the eighteen, scoring her first of the season to join Erceg and Williams. Later, in the 89th minute, Ryan Williams sent in a cross from the right flank to find Mace once again. With an aerial volley, Mace recorded the brace to give the Courage a five-goal advantage as the final minutes ticked away, earning the midfielder Budweiser Player of the Match honors. Goalkeeper Casey Murphy recorded the clean sheet, her second this season.

“It was a huge relief because I think I’ve been playing with a weight on my shoulders...Paul said to me before I came in ‘just play like yourself and get your first goal,’ and I guess that’s what I did tonight, it was fun.”

“I think that this game [represented] the Courage...we really were focusing on putting away our opportunities, and tonight that’s what we did. We made a point to put the game away.”

“I think [Debinha and Sam] were exceptional tonight, Sam being on the field allowed both O’Sullivan and Solaun to get on the ball more. Sam gives us a different lift and a different look: she made great exchanges vertically with Havana and horizontally with Debinha, and really our attacking play up. It’s great to have her back, she’s phenomenal.”

Next Match: The North Carolina Courage will hit the road to take on the Chicago Red Stars on Saturday, June 5 at 2 p.m. ET at SeatGeek Stadium in Bridgeview, Illinois.