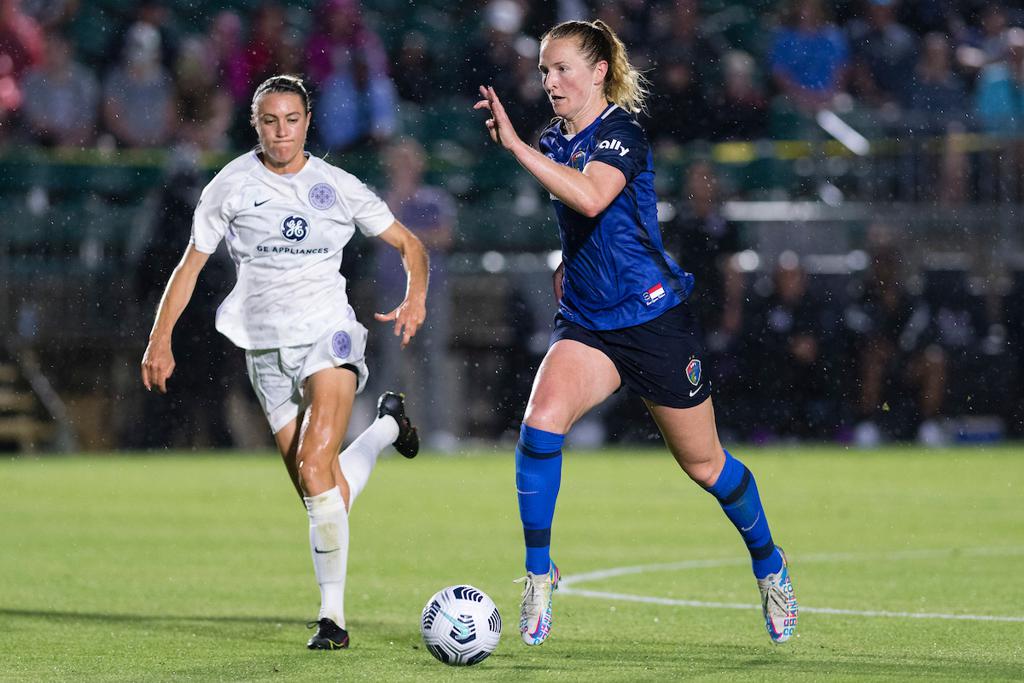 CARY, NC (June 21, 2021) - The North Carolina Courage will look to add a second consecutive win as they hit the road to face Racing Louisville FC on Wednesday, June 23 at 7:30 p.m. ET at Lynn Family Stadium in Louisville, KY. Building from the momentum of last Saturday’s win over the OL Reign, the Courage have an opportunity to move up the ladder in league standings should they add three points in Wednesday’s tilt.

The last meeting between the two teams saw the Courage seal a commanding victory, 5-0, over Louisville. Abby Erceg, Debinha, and Lynn Williams each added a goal apiece, and Hailie Mace scored the brace to lift North Carolina to their first win of the season in front of their home crowd. The match also marked the much-anticipated season debut of Sam Mewis, who returned stateside in May following a year-long stint with Manchester City.

Players to Watch by JubliaRX.com

Emerging as a key player in recent matches, Havana Solaun has been a member of the starting lineup in four of the Courage’s five games played. The Jamaican international has logged 357 minutes of playing time for the Courage, posting six shots, a 100% success rate in aerial duels and six interceptions throughout the season. Solaun’s ability to distribute the ball in the midfield makes her a valuable asset to the North Carolina offense, as she will look to create scoring chances for the Courage in Saturday’s matchup -- or perhaps add her own name to the scoresheet.

Salmon made her debut for Racing Louisville on Sunday night, entering the match in the 70th minute. It took the 20-year-old less than a minute to score her first goal, as she received a pass from teammate Savannah McCaskill and buried the game-winner, leading Louisville to their first win since May 21. In Salmon’s subsequent 19 minutes of playing time, she notched three shots, stunning the Houston defense with her immediate impact. Salmon will look to repeat a similar pattern against the Courage on Wednesday night.

The Courage bested the OL Reign 2-1 in their most recent contest behind a stellar performance in net from Casey Murphy and goals from Jessica McDonald and Sam Mewis. A ball from Merritt Mathias found the head of McDonald in the box, as McDonald logged her second goal of the season to give the Courage a 1-0 lead in the 45th minute. Later, Lynn Williams added the assist on Mewis’s goal, playing a quick give-and-go that allowed Mewis to tap in the game-winner at close range in the 78th minute. With the assist in last Saturday’s match, Williams became the NWSL’s all-time assist leader. Jessica Fishlock scored the lone goal for the Reign, but the visitors fell short as time expired, 2-1.

Up Next: The North Carolina Courage will return to Sahlen’s Stadium at WakeMed Soccer Park to celebrate Pride Night and take on the visiting Portland Thorns on Saturday, June 26 at 7 p.m. ET. Tickets for that match are available here. Plus, ticket packages, including a Courage Pride scarf, can be purchased here.