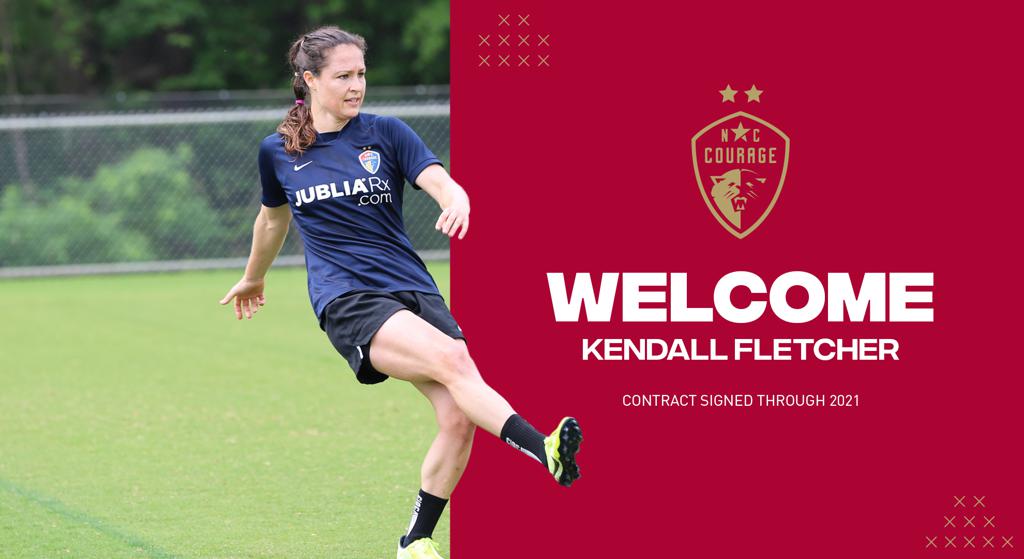 The Cary native brings over a decade of professional playing experience, in the states and overseas, along with coaching experience at the Division 1 collegiate level.

Cary, NC (June 22, 2021) - The North Carolina Courage announced that Kendall Fletcher has signed a contract with the club for the remainder of the 2021 season. The 36-year-old defender is from Cary, NC and played for the University of North Carolina at Chapel Hill, before competing in the Women’s Professional Soccer league, as well as in Sweden, Australia, and again in the U.S. for the Seattle Reign.

While with the Tar Heels from 2002-2005, Fletcher won the 2003 NCAA National Championship, three ACC championships, and appeared in 67 games, netting eight goals. After college, the defender spent time in the Women’s Professional Soccer league, the Swedish Damallsvenskan, and the Australian W-League before finally landing on the Seattle Reign’s roster in 2014. While with the Reign, Fletcher played in 66 matches and scored five goals as a defender, helping the team to a league record 16-game unbeaten streak and an NWSL Shield. For her performance, she was named to the league’s Best XI that same year.

During her two-year career with the Reign, Fletcher played on loan in the W-League for Canberra United and the Western Sydney Wanderers. In 2017, it was announced that Fletcher would not return to the Reign and would instead attend Hillsong Bible College in Sydney, Australia. That same year, she rejoined Canberra United as a guest player, and was recently named captain of the team for the 2020/2021 season. Fletcher has also spent time as an assistant coach for the University of California, Irvine.

“Kendall’s experience, positional sense and leadership qualities made this an easy decision,” Head Coach Paul Riley said. “She is a fabulous competitor and her winning attitude brings our team more competition for places. She is a player who wants to win and knows what it takes. I love her attitude at training and she will be very important as we navigate the Olympic exodus.”

The Courage play their next match on the road against Racing Louisville tomorrow, June 23 at 7:30 p.m. ET, broadcast on Paramount+. The team will then return home for their Pride Night match against the Portland Thorns on Saturday, June 26 at 7:00 p.m. ET, also on Paramount+. Tickets for that match are available here. Plus, ticket packages, including a Courage Pride scarf, can be purchased here.