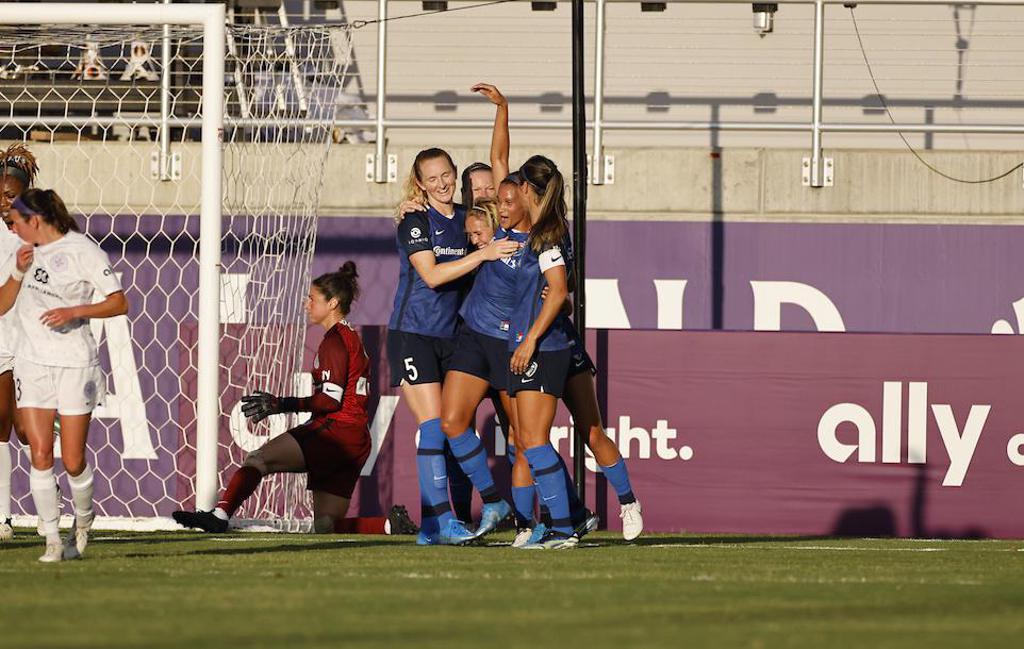 LOUISVILLE, KY (June 23, 2021) - The North Carolina Courage added three points against Racing Louisville FC on Wednesday night, besting the league newcomers 2-0 behind a dazzling performance and brace from Lynn Williams, with Sam Mewis and Carson Pickett tallying an assist apiece. For her efforts, Williams was honored as the Budweiser Player of the Match.

With tonight’s victory, the Courage catapulted into third place in league standings with 10 total points and a 3-1-2 record. An opportunity to advance further up the ladder is at hand this weekend as Paul Riley’s team returns home to celebrate Pride Night and take on the Portland Thorns for the first time this season.

Tonight’s win over Louisville was highlighted by the starting debuts of Angharad James, Brittany Ratcliffe, and Ryan Williams, as well as goalkeeper Katelyn Rowland’s first regular season start in goal. Rowland, who made two saves, also notched her first clean sheet of the season. The Courage took 19 total shots and were able to maintain 63% possession and 84% passing accuracy, limiting Louisville to only two shots on goal throughout the contest.

Lynn Williams drew first blood in tonight’s contest, scoring her second goal of the season in the 27th minute of play. Stripping a ball from Louisville’s Savannah McCaskill in the midfield, Sam Mewis was able to thread a pass to Williams just outside the eighteen. With her first touch, Williams dribbled into the box, cutting the ball to her right foot before burying a shot past Michelle Betos and into the upper ninety to give the Courage a 1-0 lead.

Williams struck again just seven minutes later, finding the net for a second time on a corner kick from Carson Pickett. Pickett’s ball met the head of Williams in the box, and with a quick redirection, the Courage edged into a comfortable 2-0 lead as the first half expired. Having scored two goals in tonight’s contest, Williams is now tied for second with Ashley Hatch of the Washington Spirit for the most number of goals scored this season with three total goals.

Katelyn Rowland, GK -
On mentality going into her first start of the season:

“My mentality going into this game was just to do my job. The girls are so great, they make me feel comfortable and get me involved right away, it’s seamless, and that’s what we try to do for everyone with our squad being so deep.”

“I think we’ve flip-flopped between having a good game then an average one many times so far this season. Tonight, we were coming off a great win and wanted to continue that momentum. We’ve been okay on the road, but we know that if we want to be an elite team we have to get points away from home, and I feel like we used that goal to motivate ourselves to go out and get some goals, which we did.”

“She’s got a lot of similarities to Denise O’Sullivan, who she already has a great relationship with, and has a great range of passing and a great engine. She plays intelligently with the ball, and for me, she was one of the highlights of the night.”

On getting out on the front foot

“At times this season we’ve struggled to get a grip on the game and get some goals on the board, but I think we started the game super well today and could’ve scored 5 or 6 to be honest. We were able to attack well in all channels, with both our fullbacks and attacking midfielders applying heaps of pressure, and really should’ve buried the game. I’ll take scoring two goals on the road though, and thought we managed the game really well in the second half.”

Next Match: The North Carolina Courage will return to Sahlen’s Stadium at WakeMed Soccer Park to celebrate Pride Night and their Olympics Sendoff Match as they take on the Portland Thorns on Saturday, June 26 at 7 p.m. ET.  Tickets are available here.