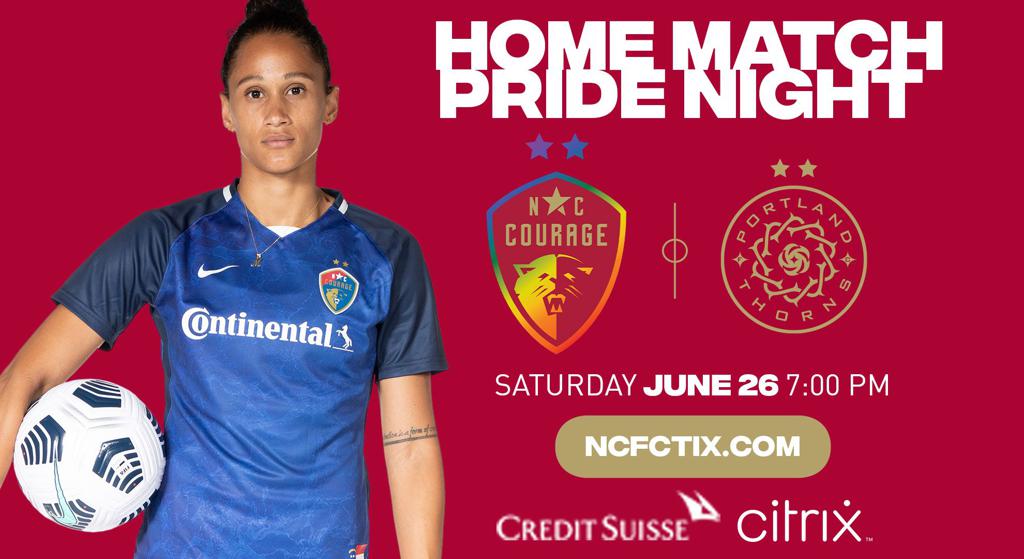 CARY, NC (June 24, 2021) - Building off of the momentum from two consecutive wins, the North Carolina Courage are returning home to celebrate Pride Night and their Olympic Send-Off Match as they take on the visiting Portland Thorns at home on Saturday, June 26 at 7 p.m. ET. Tickets are available here, and fans can also purchase a Pride Scarf + ticket package here.

The last meeting between the two teams took place during last year’s Challenge Cup, in which the Courage fell short of the Thorns in the quarterfinals of the tournament, 1-0, after cruising through the preliminary rounds with an undefeated record. Though the Courage had several close chances, Portland keeper Britt Eckerstrom posted eight saves throughout the match to render the two-time NWSL champions scoreless as the final minutes ticked away. Morgan Weaver recorded the lone goal for the Thorns.

Where to Watch: Paramount+ and FOX50 (local)

Scoring two goals in Wednesday’s competition against Racing Louisville, Lynn Williams has been menacing on the Courage offensive line this season -- the forward is a fierce challenger to defenses across the league, and a combination of composure in the final third, excellent field vision, and top-notch ability on the ball.

The Fresno, CA native is also the NWSL’s all-time leader in assists, having notched two assists thus far in the season, and is tied with Ashley Hatch of the Washington Spirit for the second-most number of goals scored with three total goals. Williams will look to add her name to the scoresheet for a fourth time in Saturday’s match against the Thorns.

Saturday’s match marks the first time that Crystal Dunn has returned to North Carolina since being traded to Portland. Dunn needs no introduction -- she is a versatile asset to any roster, and has started all six of Portland’s matches since being added to their lineup, only subbing out of one game this season.

Equally skilled in the defensive and offensive thirds, Dunn has tallied 13 total shots on the season, scoring a goal and assisting another, while also maintaining a 75% success rate in tackles and 58.6% success rate in duels. Dunn will look to go toe-to-toe with her former teammates this weekend as she returns to Courage Country.

The North Carolina Courage added three points on the road against Racing Louisville FC on Wednesday night, besting the league newcomers 2-0 behind a dazzling performance and brace from Lynn Williams. Sam Mewis and Carson Pickett both tallied an assist. With the win, the Courage have climbed into third place in league standings, with a chance to advance further up the ladder at hand this Saturday.

Wednesday’s win over Louisville was highlighted by the starting debuts of Angharad James, Brittany Ratcliffe, and Ryan Williams, as well as goalkeeper Katelyn Rowland’s first regular season start in goal. Rowland, who made two saves, also notched her first clean sheet of the season. The Courage took 19 total shots and were able to maintain 63% possession and 84% passing accuracy, limiting Louisville to only two shots on goal throughout the contest.

Up Next: The North Carolina Courage will hit the road to face off against the league-leading Orlando Pride on Sunday, July 4 at 6 p.m. ET at Exploria Stadium in Orlando, Florida. The next Courage home match will be on July 17 at  7 p.m. against the Houston Dash. Tickets are available here.