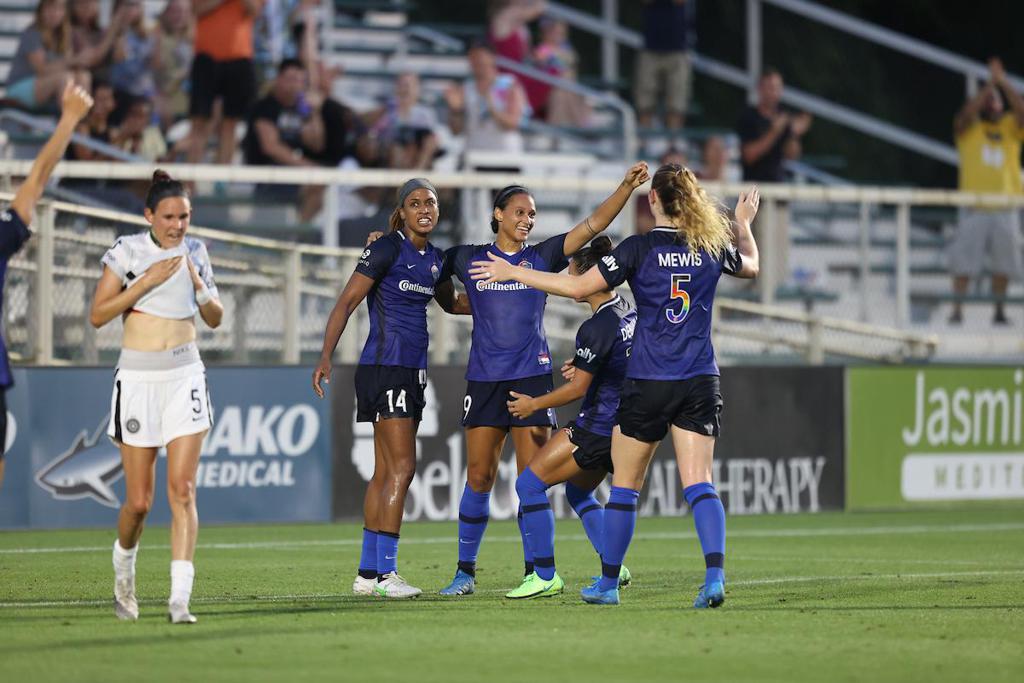 CARY, NC (June 26, 2021) - The North Carolina Courage logged their third consecutive win on Saturday night against the Portland Thorns, besting their league foe 2-0 in front of their home crowd. Lynn Williams recorded the brace and Carson Pickett added both assists. Casey Murphy posted her third clean sheet of the season, making four saves to render the Thorns scoreless throughout the contest. With the win, Paul Riley’s team has moved into second place in league standings, with an opportunity to edge into first place on the table with a win over the Orlando Pride this Sunday.

The Courage nearly broke the ice when Merritt Mathias lofted a ball into the Portland box, finding the head of Jessica McDonald in the 18th minute of play. McDonald was challenged in the air by Thorns keeper AD Franch, who ultimately made the save to deny the Courage the early lead. Minutes later, Sam Mewis fired a line drive from outside the 18, the shot narrowly missing the net and falling just wide of the post.

Though the first half ended in a 0-0 deadlock, the Courage tallied 8 shots, maintained 51% of possession and posted an 80% passing accuracy rate through 45 minutes of play and into stoppage time, continuing to press Portland’s defense for a go-ahead goal. In the 30th minute of the match, captain Abby Erceg became the 14th NWSL field player in history to log 10,000 regular-season minutes of playing time, and the first Kiwi to ever do so.

A corner kick would be the catalyst for the Courage to find the net, as Pickett sent in a near-perfect ball that skimmed the head of a Portland defender and landed in the path of Williams. With her first touch, Williams buried her fourth goal of the season to give the Courage a 1-0 lead in the 58th minute, tying Orlando Pride players Alex Morgan and Sydney Leroux on the leaderboard for the most goals scored this season.

Williams was not finished just yet, as she nailed home a header on yet another cross from Pickett, notching her second consecutive brace to extend the Courage’s lead, 2-0, in the 66th minute. The forward is now the season’s leading scorer, having scored five goals this season -- four of those goals being in back-to-back games. Pickett recorded the assist, becoming the league leader in assists this season.

“It’s been a fantastic week for us, and amazing to come away from it with nine points,” Head Coach Paul Riley said. “Our confidence is high, and with congestion like this it’s just about finding balance so we can get as much of our players as possible.”

Saturday’s game was a celebration of both Pride Night and an Olympic send-off for Sam Mewis, Lynn Williams, Debinha and Abby Erceg, who will represent their respective countries in Tokyo next month. Ahead of the game, the players sported Courage-branded Pride Night t-shirts, which were also available for fans to purchase, with proceeds going to the LGBT Center of Raleigh. The team also wore rainbow patterned numbers on their jerseys during match play.

“We were super excited to wear the pride numbers tonight,” Courage forward Lynn Williams said. “It’s been a long time coming. It means a lot to many of the members of our team, and for us to put those numbers on our backs means that we’re representing something bigger than us, something bigger than the game we’re playing.”

Up Next: The North Carolina Courage will travel to face the Orlando Pride on Sunday, July 4 at 6 p.m. ET at Exploria Stadium in Orlando, Florida.