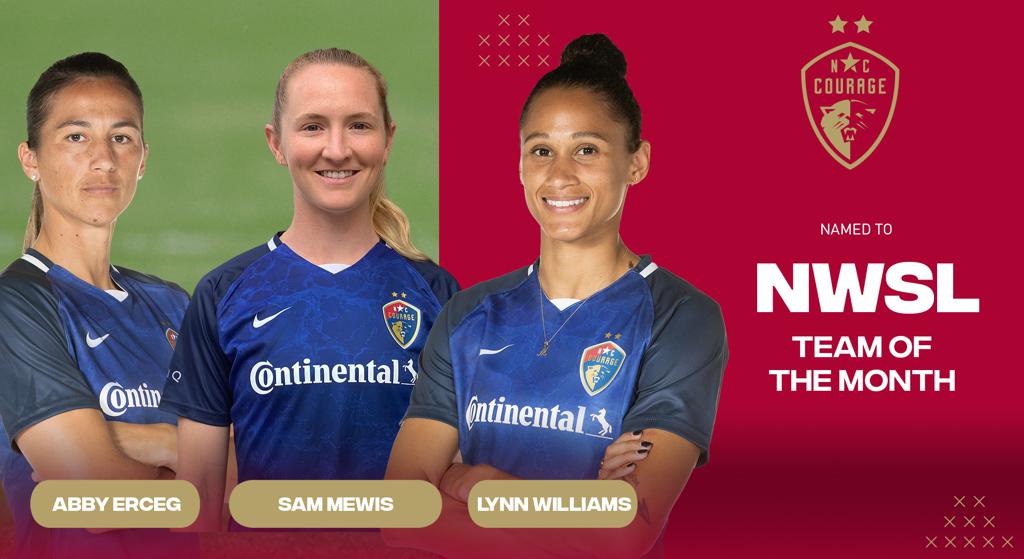 Cary, NC (July 1, 2021) ­— The National Women’s Soccer League announced today that North Carolina Courage forward Lynn Williams has been named the Player of the Month for the month of June by the NWSL Media Association. Midfielder Sam Mewis and defender Abby Erceg were named to NWSL’s Team of the Month. The Courage led the roster with three total selections, while the Orlando Pride and Washington Spirit each earned two spots. The Houston Dash, NJ/NY Gotham FC, the Portland Thorns and Racing Louisville FC each earned one spot.

The leading scorer this month, Williams notched four goals in back-to-back Courage victories over Racing Louisville FC and Portland Thorns FC, leading the team to a pair of 2-0 results. Williams’ offensive tear began when she fed the game-winning assist in North Carolina’s 2-1 win over OL Reign. The assist kick-started a good run of form for the striker.

The Fresno, California native collected her first goal of the month against Louisville on June 23, striking 27 minutes into the match to give her side the lead before sealing the 2-0 win with a second tally just five minutes later. Williams shined once more in North Carolina’s June 26 match against Portland, again leading the scoring effort with two goals to secure a 2-0 victory over the Thorns, helping the Courage to a 3-1-0 ledger in June.

Abby Erceg and Sam Mewis both earned themselves spots on the NWSL Team of the Month for June. Center back Abby Erceg remained a reliable mainstay on the North Carolina back line throughout the month of June, stretching her pass distribution to nearly 90 percent and helping the Courage to a 3-1-0 record through the last four games. Midfielder Sam Mewis expertly patrolled the Courage midfield and notched both the game-winning goal in North Carolina’s 2-1 win over OL Reign and an assist in the team’s 2-0 result against Louisville in her first full month back in the NWSL.

The NWSL Player of the Month is selected each month of the regular season by the NWSL Media Association, a collection of writers that cover the league on a consistent basis.