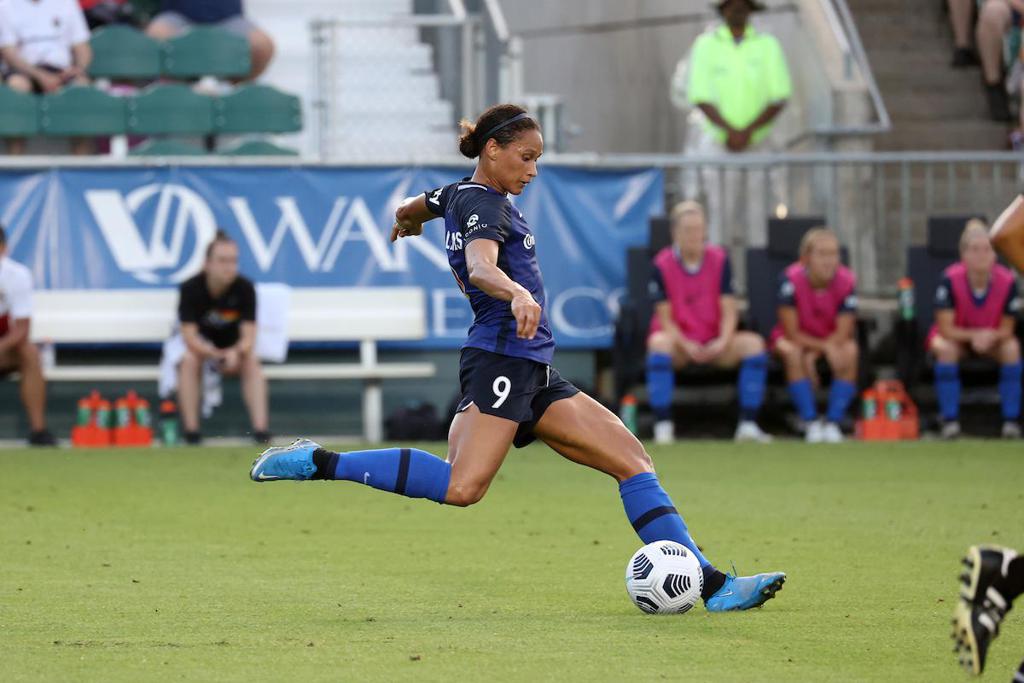 CARY, NC (July 2, 2021) - With three consecutive wins under their belt, all eyes are on the Courage as they battle to move into first place with a win over the Orlando Pride on Sunday, July 4 at 6 p.m. ET at Exploria Stadium in Orlando, FL. Following last weekend’s dominant 2-0 win over the Portland Thorns, the Courage sit at second place in the table with 13 points, a mere two points behind the Pride, who have 15 points. Should the Courage come away with three points in Sunday’s match, first place in league standings is theirs for the taking.

The last meeting between the two teams took place earlier this season, as the Courage fell to the Orlando Pride 2-1. Jessica McDonald notched her first goal of the regular season during the contest, with Lynn Williams finding the assist. Though a valiant effort to equalize highlighted the final minutes of the match for the Courage, the group came up short of their fellow East Coast opponents. Sydney Leroux and Alex Morgan added a goal apiece to lift the Pride to a win.

Recently named to the NWSL’s Team of the Month, Erceg has been a staple in the Courage’s backline, maintaining a 90% passing accuracy rate throughout seven matches. The New Zealand international has been an integral part of the Courage’s recent winning streak, adding a goal in the Courage’s commanding 5-0 win over Racing Louisville FC. With a lot at stake during this weekend’s contest, the Courage will rely on their captain to lead the charge on defense, shutting down Orlando in the attacking third.

Sydney Leroux has been on an absolute tear this season, scoring four goals through seven matches played. Needless to say, the Pride rely on Leroux’s quick style of play, ability on the ball and composure in the final third to win matches, and Sunday’s contest against the Courage will be no exception -- the Pride will look to remain in first place with a win or a tie, and Leroux will play a key role in ensuring a favorable result.

The North Carolina Courage logged their third consecutive win against the Portland Thorns, besting their league foe 2-0 in front of their home crowd last weekend. Lynn Williams recorded the brace and Carson Pickett added both assists, as Williams became this season’s leading scorer and Pickett now holds the second-most number of assists in the league. Casey Murphy posted her third clean sheet of the season, making four saves to render the Thorns scoreless throughout the contest.

The match was also a celebration of both Pride Night and an Olympic send-off for Sam Mewis, Lynn Williams, Debinha and Abby Erceg, who will represent their respective countries in Tokyo next month. Ahead of the game, the players sported Courage-branded Pride Night t-shirts, which were also available for fans to purchase, with proceeds going to the LGBT Center of Raleigh. The team also wore rainbow patterned numbers on their jerseys during match play.

Up Next: The North Carolina Courage will continue their stint on the road to face off against the Washington Spirit on Saturday, July 10 at Audi Field in Washington, D.C.