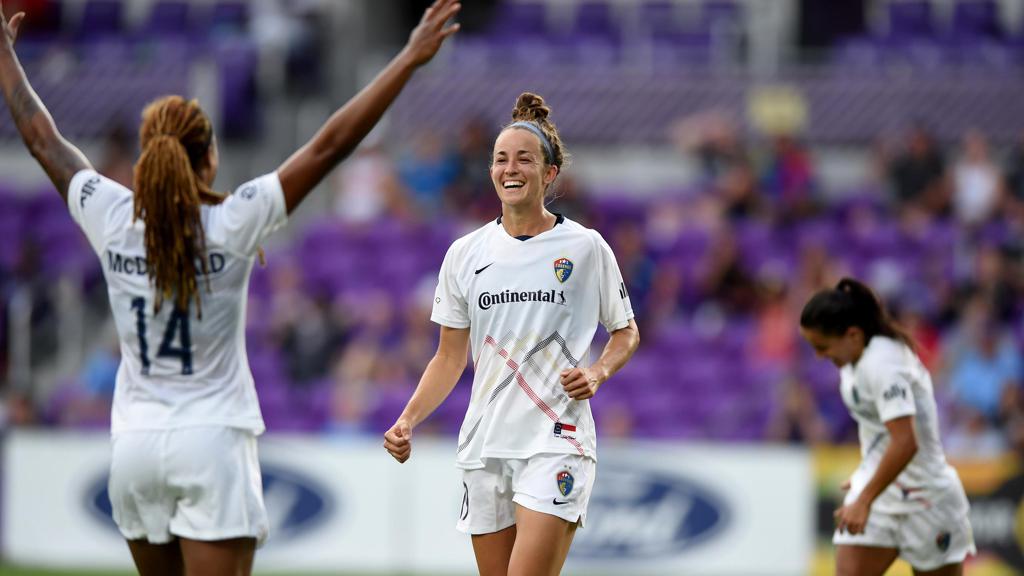 Orlando, FL  (July 4, 2021) - The North Carolina Courage are now in first place in the NWSL following a 2-0 victory over the Orlando Pride on the road tonight. Sunday’s match featured goals from Debinha and Havana Solaun, plus another clean sheet for Casey Murphy, who now has four on the season.

The Courage struck early when Debina intercepted the ball in the third minute, capitalizing off a mistake from the Orlando backline and slotting the ball into the lower left corner of the net. Twenty minutes later, Courage forward Jessica McDonald drove down the endline, served a ball in, which deflected off of an Orlando Pride defender, and nearly resulted in an own goal.

McDonald continued her offensive pressure as she found another dangerous opportunity late in the half. As she drove into the box, she was tackled from behind, drawing a foul and penalty kick. Lynn Williams took the penalty from the spot, but her attempt was saved by Orlando goalkeeper Ashlyn Harris.

Midway through the second half, the Courage extended their lead to 2-0 with a goal from Havana Solaun, her first of her Courage career. The build began with a lofted ball in from Angharad James, changing the point of attack and finding the feet of Lynn Williams. Williams served in to McDonald who settled the ball in the box, laying it off to Solaun who drove a shot it to the top left corner.

The Courage got on the board early when Debinha capitalized on a turnover forced by Havana Solaun high up the pitch. Debinha drove forward with the ball in stride, taking on Ashlyn Harris in goal and slotting it home at the near post. This goal brings Debinha to two goals on the season, but her fourth goal contribution.

North Carolina extended their lead as Havana Solaun found her first goal for the club, with a calm and collected finish into the top corner. The assist came from Jess McDonald as she settled the ball down out of the air and laid it off into the path of Solaun.

Havana Solaun on the Courage’s overall place in the standings:

“It’s really nice to be number one, but it’s more gratifying to see us coming together as a team rather than at the top of the table. We’ve all been putting in the work to get here, but we know that we’ve got a lot more to do if we want to stay in this position.”

“We always feel like we have a target on our back, but regardless of our league position, we know we’re going to train harder than anybody else. Everybody deserves credit for this run of games we’ve been on, results like this will keep coming because everybody’s bought into what we want to accomplish.”

Head Coach Paul Riley on the Courage finding their footing:

“This was a great performance away from home, I thought we managed things well. The last few weeks have been great, but this result is really special for the group. Orlando is a tough place to play and they’re a really dangerous team in many different areas. I think the groove that we’ve found, playing so many games right in a row, has brought the most out of this squad, and that was on display tonight.”

Next Match: The North Carolina Courage will continue their stint on the road as they travel to face the Washington Spirit on Saturday, July 10 at 7 p.m. ET.