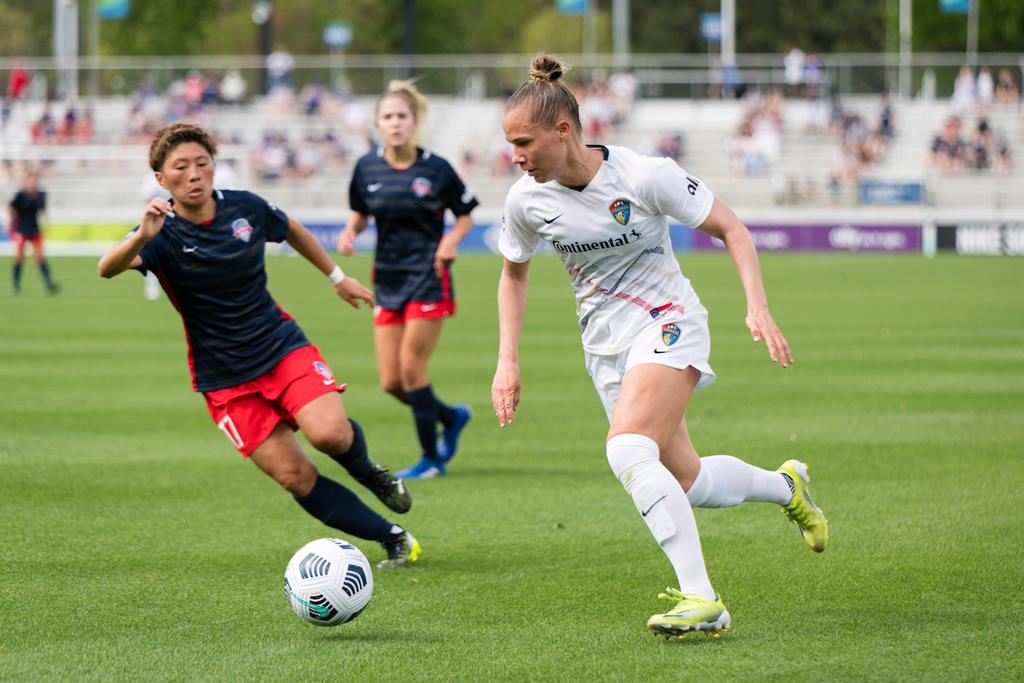 CARY, NC (July 8, 2021) - Having won four consecutive matches and earning the top spot in the league, the Courage will look to add to their winning streak as they travel to face the Washington Spirit on Saturday, July 10 at 7 p.m. ET. Following last weekend’s 2-0 win over the Orlando Pride, the Courage now sit at first place in league standings with 16 points and only eight matches played, boasting a 5-2-1 record.

The last meeting between the two teams took place during the Challenge Cup, and the Courage defeated the Spirit 3-2 behind goals from Jessica McDonald, Kristen Hamilton and Merritt Mathias. Mathias had just returned to the Courage line-up for the first time since her ACL injury in 2019. Kumi Yokoyama and Trinity Rodman added a goal apiece for the Spirit as they attempted to recover the deficit, but fell short as time expired.

Saturday’s match will mark Mathias’s 150th regular-season NWSL match, making the defender the fourth player in league history to achieve such a milestone. Since returning from an ACL injury in 2019, Mathias has bounced back even better than before, starting in seven matches for a total of 571 minutes played and tallying five key passes, an assist, and eleven clearances. With Mathias in their midst, the Courage backline has only allowed four goals against this season - the second-least in the league - and will look to render the Spirit scoreless in this weekend’s contest.

A standout performer in her first NWSL season, Rodman has posted two goals, two assists, and eleven key passes in eight matches played. The 19-year-old is nothing short of a superstar, taking up an integral role in the Spirit’s offense, a role that she will continue to fill in Saturday’s match. Rodman’s ability on the ball and confidence in the attacking third will pose a challenge to the Courage defense as the attacker will look to add her name to the scoresheet this weekend.

The North Carolina Courage secured first place in the NWSL following a 2-0 victory over the Orlando Pride on the road, with the match featuring goals from Debinha and Havana Solaun and a clean sheet for Casey Murphy, who now has four on the season. Solaun’s goal was her first with the Courage, as well as her first goal of the season.

“This was a great performance away from home, I thought we managed things well. The last few weeks have been great, but this result is really special for the group,” said Head Coach Paul Riley following the match. “Orlando is a tough place to play and they’re a really dangerous team in many different areas. I think the groove that we’ve found, playing so many games right in a row, has brought the most out of this squad, and that was on display tonight.”

Up Next: The North Carolina Courage will return to Sahlen’s Stadium at WakeMed Soccer Park to face the Houston Dash for the first time this season on Saturday, July 17 at 7 p.m. ET. Tickets are available here.