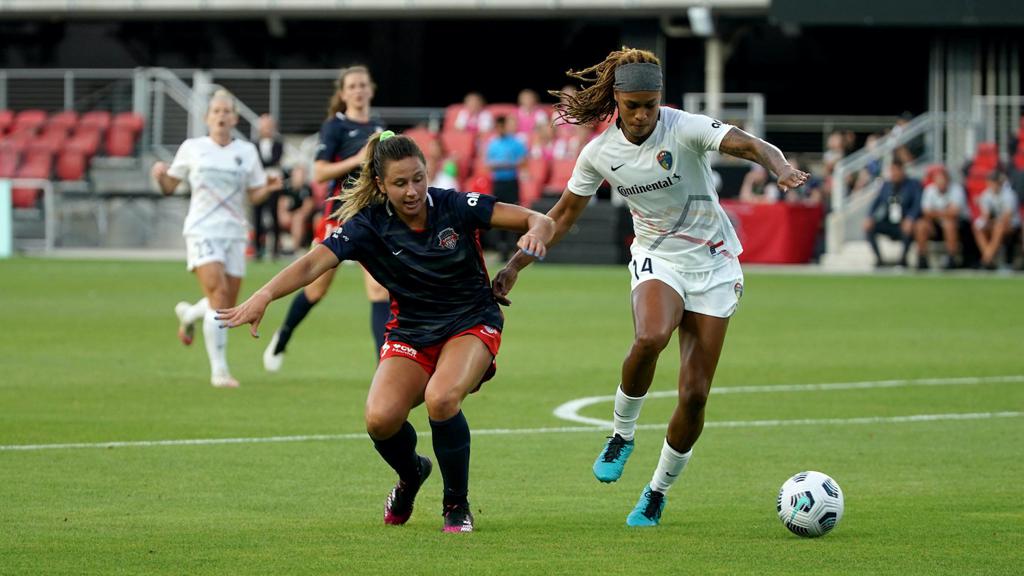 WASHINGTON, D.C. (July 10, 2021) -  The Courage fell to the Washington Spirit, 2-0, in Saturday night’s contest at Audi Field in Washington, DC. Despite a standout performance from goalkeeper Casey Murphy and chances from captain Abby Erceg, Jessica McDonald and Carson Pickett, the Courage were unable to erase the deficit that lingered after the first half. Ashley Hatch added both of the goals for Washington. With the result, the Courage remain in first place in league standings with 16 points, ahead of the Orlando Pride by way of goal differential.

“We’re obviously very disappointed with that result. I think first and foremost, you have to go out and give it 100%, but I don’t think that was there from the beginning of the game,” said Denise O’Sullivan following the match. “We needed more energy from everyone, but we’ll try and take some positives from this and move on to the next game.”

“You need to come back down to Earth, I think we got a little excited after winning four straight. I think it’s good for us to reset and get going again,” said Head Coach Paul Riley. “We just need to get some chemistry again, we were a little bit disjointed tonight and had to make changes up front.”

The Courage will look to add to the win column next weekend against the Houston Dash, as their brief stint on the road concludes and the squad returns home to Sahlen’s Stadium next Saturday, July 17.

The Washington Spirit struck first, as defender Sam Staab lofted a long ball into the Courage box. Staab’s cross initially skimmed the head of a Spirit player as a scrum in the box ensued. Unfortunately for the Courage, the ball fell to the feet of Ashley Hatch just inside the six. Now at close range, Hatch tapped in her fourth goal of the season to give the Spirit a 1-0 lead in the early minutes of the contest.

Capitalizing on a through ball from Andi Sullivan, Ashley Hatch added her second goal of the match to put the Spirit up 2-0 despite Casey Murphy’s best effort to make the save. With the brace in tonight’s match, Hatch is now tied with Sydney Leroux and Lynn Williams for the most goals scored this season, bringing her season total to five goals.

Up Next: The North Carolina Courage will return to Sahlen’s Stadium at WakeMed Soccer Park to take on the Houston Dash on Saturday, July 17th at 7 p.m. ET. Tickets are available here.