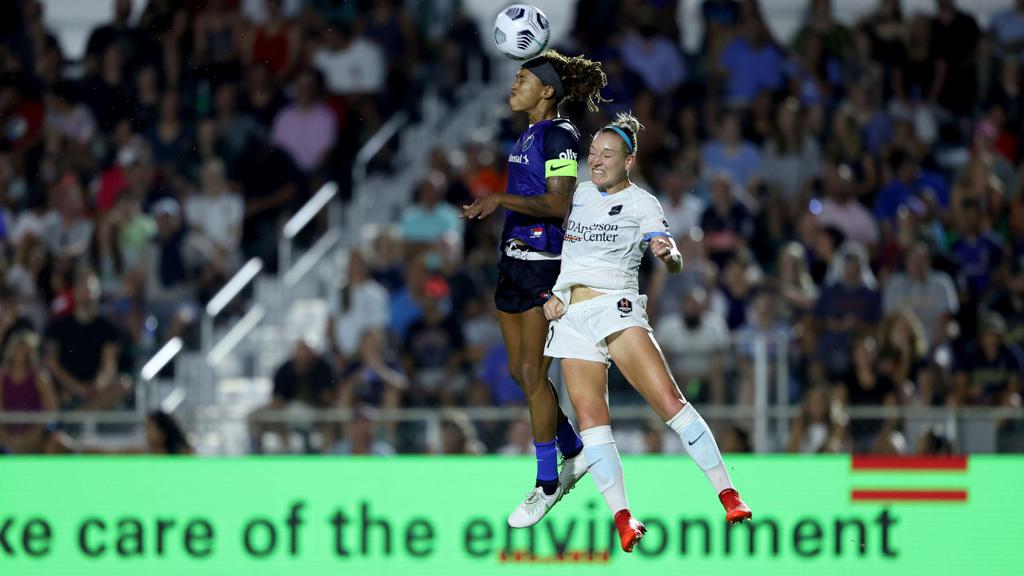 CARY, NC (July 17, 2021) — The North Carolina Courage fell short of the Houston Dash on Saturday night, as two first-half goals were stripped away as a result of offside calls. Shea Groom tallied a goal to put the Courage at an early 1-0 disadvantage, but Kristen Hamilton erased the deficit with an equalizer in the 16th minute. Despite the hard-fought effort from the Courage on all fronts, a second-half goal from Gabby Seiler would lift the Dash to the 2-1 win. With the result, the Courage remain in first place in league standings with 16 points, now tied with the Orlando Pride, the Portland Thorns, and the Dash.

“I thought we were really great tonight, except for the first 15 minutes of the second half – it looked like we’d stayed in the locker room,” said Head Coach Paul Riley. “In all fairness, the game should’ve been put to bed by halftime. Some might look at our performance as a poor one but I thought it wasn’t all that bad.”

“I think we didn’t play poorly tonight, and that’s what makes this loss hurt a little bit more,” said Hamilton following the match. “Tidying up unforced errors and not conceding soft goals will be a point of emphasis for us in the future.”

Following a goal from Jessica McDonald that was called offside in the third minute, the Houston Dash opened the scoring in tonight’s tilt, with Veronica Latsko slipping a through ball into the path of Groom. Taking a single touch, the midfielder buried a ball into the lower 90 in her 100th NWSL appearance to give the visitors a 1-0 advantage in the ninth minute.

The deficit would not last long, however, as the Courage answered with an equalizer just seven minutes later. The game-tying attack began at the hands of Merritt Mathias, who sent a long ball into the Houston box from the right flank. Taking an unfortunate deflection off of a Dash defender, the cross fell at the feet of Hamilton, who notched her first goal of the season to deadlock the match at a goal apiece in its early minutes.

A second Courage goal was called offside in the 35th minute, with Hamilton receiving a ball from Havana Solaun in the final third and connecting on what would have been her second goal of the match. Hamilton’s attempt at the brace met a similar fate to that of McDonald’s goal in the first half, and the Courage were denied the go-ahead goal as a result of the offside decision.

Houston added a second goal in the 62nd minute, reaping the benefit of a yellow card shown to Denise O’Sullivan just outside the Courage box. Seiler took the free kick, converting the attempt to give Houston a 2-1 lead. Unfortunately for the Courage, the squad was unable to find the back of the net despite several near-scoring chances as the final minutes ticked away. The North Carolina side will look to add to the win column as they travel to face off against Kansas City next Friday, July 23.

Next Match: The North Carolina Courage will hit the road to face off against NWSL-newcomers Kansas City for the first time this season on Friday, July 23 at 8 p.m. ET at Legends Field in Kansas City, Kansas.