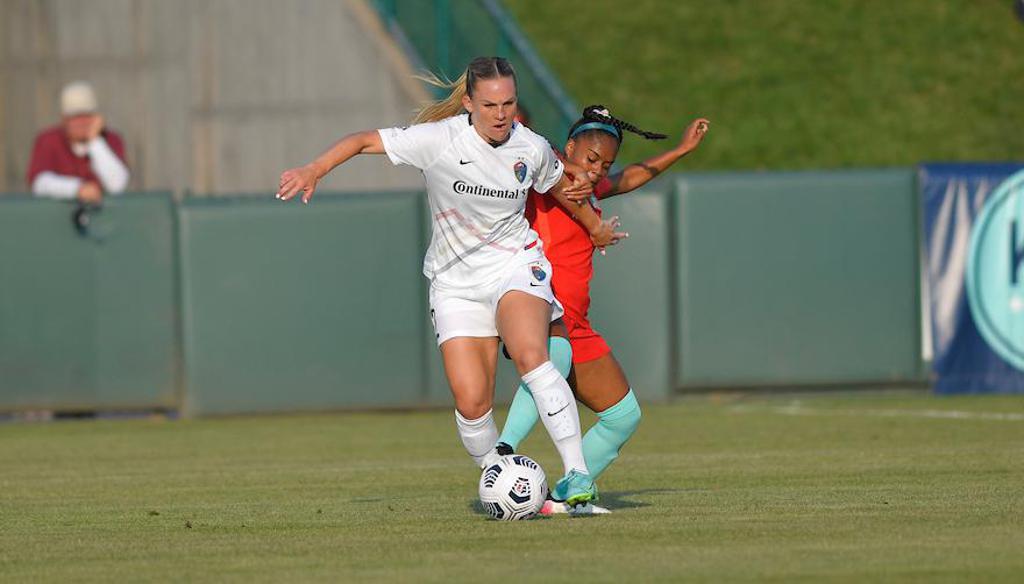 Kansas City, KS (July 23, 2021) - With only four players available off of the bench, the North Carolina Courage saw through a scoreless draw with Kansas City on Friday night as both sides came away with a point. Taylor Smith and Meredith Speck made their first starts of the 2021 season during the match, and Casey Murphy recorded her fifth clean sheet of the season, recording six saves and earning the honor of Budweiser Player of the Match. With the result, the Courage now sit in third place in league standings, tied with the Chicago Red Stars with 17 points.

Earlier this week, the Courage announced that they had acquired NWSL veteran Amy Rodriguez and $60,000 in allocation money in exchange for striker Kristen Hamilton, midfielder Hailie Mace, and goalkeeper Katelyn Rowland. In tonight’s match, all four players involved in the trade were available to their respective teams, with Rodriguez joining the Courage starting lineup and Hamilton appearing in Kansas City’s starting lineup. Mace entered the match as a second-half substitute for Kansas City.

“It was tough for everyone, it’s been a difficult few days,” Denise O’Sullivan said of playing against her former teammates. “They’re our best friends and we wish them nothing but the best. It was a nightmare trying to mark them, they were a handful tonight!” When asked of Rodrgiuez’s integration with the team, O’Sullivan said, “We literally just met [Amy] Rodriguez today. She just went straight into the game, which is tough for her of course, but going forward I think she’s going to be fantastic for us.”

Casey Murphy echoed O’Sullivan’s sentiments. “This whole thing was crazy. It was very tough to see them traded and we’re wishing them all the best,” she continued. “Despite all the things that have happened in the past 48 hours, I’m still very proud of this team. We’re already looking forward to our next game against Orlando.”

The Courage nearly broke the ice in the 29th minute, as the ball fell to Taylor Smith in the Kansas City box. Taking a touch and finding the goalkeeper out of position, Smith fired off a shot at close range, but was denied off of the line by Kristen Edmonds, whose block maintained the 0-0 deadlock. Likewise shutting out the competition was Murphy, who posted three saves during the first half to keep Kansas City from scoring the go-ahead goal. Despite several scoring chances ensuing in the second half, the Courage were able to find the game-winner as time expired and the points were shared in Kansas City.

Next Match: The North Carolina Courage will return to Sahlen’s Stadium at WakeMed Soccer Park to take on the Orlando Pride on Saturday, July 31 at 7 p.m. ET. Tickets can be purchased here.