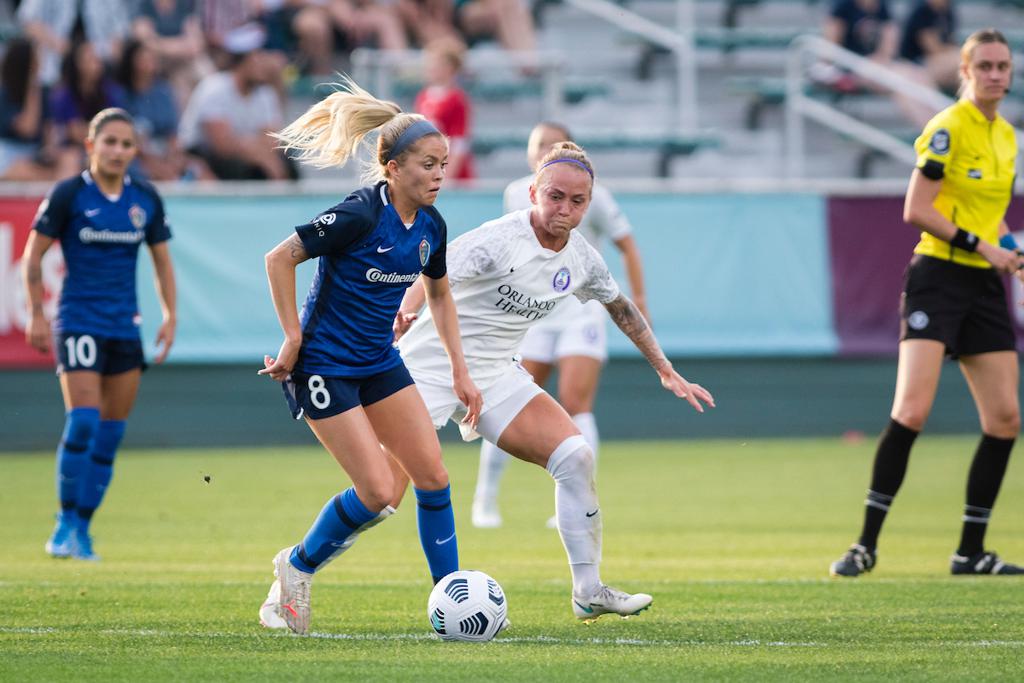 CARY, NC (July 29, 2021) - The NC Courage will face the Orlando Pride for the third time this season on Saturday, July 31 at Sahlen’s Stadium at 7 p.m. ET. Should the Courage add three points this weekend, they’ll have an opportunity to advance to second place in the table, leaping the Chicago Red Stars, the Washington Spirit and Gotham FC. Tickets are available here and the club is running a $2 Hot Dog Night promotion.

The last meeting between the two teams took place on July 4 in Orlando, when the Courage bested the Pride 2-0. The Courage struck early when Debinha intercepted the ball in the third minute, capitalizing off a mistake from the Orlando backline and slotting the ball into the lower left corner of the net. Midway through the second half, the Courage extended their lead to 2-0 with a goal from Havana Solaun, her first of her Courage career. The build began with a lofted ball in from Angharad James, changing the point of attack and finding the feet of Lynn Williams. Williams served in to Jess McDonald who settled the ball in the box, laying it off to Solaun who drove a shot it to the top left corner.

With a league leading five clean sheets on the season, Murphy has been a consistent presence in net in each of her appearances this year. The 6’1” goalkeeper has recorded 41 saves in total through ten appearances, the second-most number of saves in the league, and boasts a 79.7% passing success rate, completing 224-of-281 attempted passes. Murphy will look to add a sixth clean sheet during Saturday’s tilt as the Courage battle to climb up the table.

A consistent member of the Pride’s backline, Krieger has started in 12 matches for Orlando this season. Through those 12 matches, the two-time World Cup champion has recorded 1,035 minutes of playing time, 46 clearances, two blocks and 16 interceptions. The Dumfries, VA, native has also posted a 71.4% success rate in tackles thus far, as well as a 63.6% success rate in duels, lifting the Pride to their hot start early in the season. Krieger will look to shut down the advances of Denise O’Sullivan, Amy Rodriguez, Angharad James and the overall offensive pressure of the Courage.

With only four players available off of the bench, the North Carolina Courage saw through a scoreless draw with Kansas City last Friday as both sides came away with a point. Taylor Smith and Meredith Speck made their first starts of the 2021 season during the match, and Casey Murphy recorded her fifth clean sheet of the season, recording six saves and earning the honor of Budweiser Player of the Match.

Earlier in the week prior to the match, the Courage announced that they had acquired NWSL veteran Amy Rodriguez and $60,000 in allocation money in exchange for striker Kristen Hamilton, midfielder Hailie Mace, and goalkeeper Katelyn Rowland. In Friday’s match, all four players involved in the trade were available to their respective teams, with Rodriguez joining the Courage starting lineup and Hamilton appearing in Kansas City’s starting lineup. Mace entered the match as a second-half substitute for Kansas City.

“It was tough for everyone, it’s been a difficult few days,” Denise O’Sullivan said of playing against her former teammates. “They’re our best friends and we wish them nothing but the best. It was a nightmare trying to mark them, they were a handful!” When asked of Rodrgiuez’s integration with the team, O’Sullivan said, “We literally just met [Amy] Rodriguez today. She just went straight into the game, which is tough for her of course, but going forward I think she’s going to be fantastic for us.”

Up Next: The North Carolina Courage will travel to face NJ/NY Gotham FC on Saturday, August 7 at 7 p.m. ET at Red Bull Arena in Harrison, New Jersey.