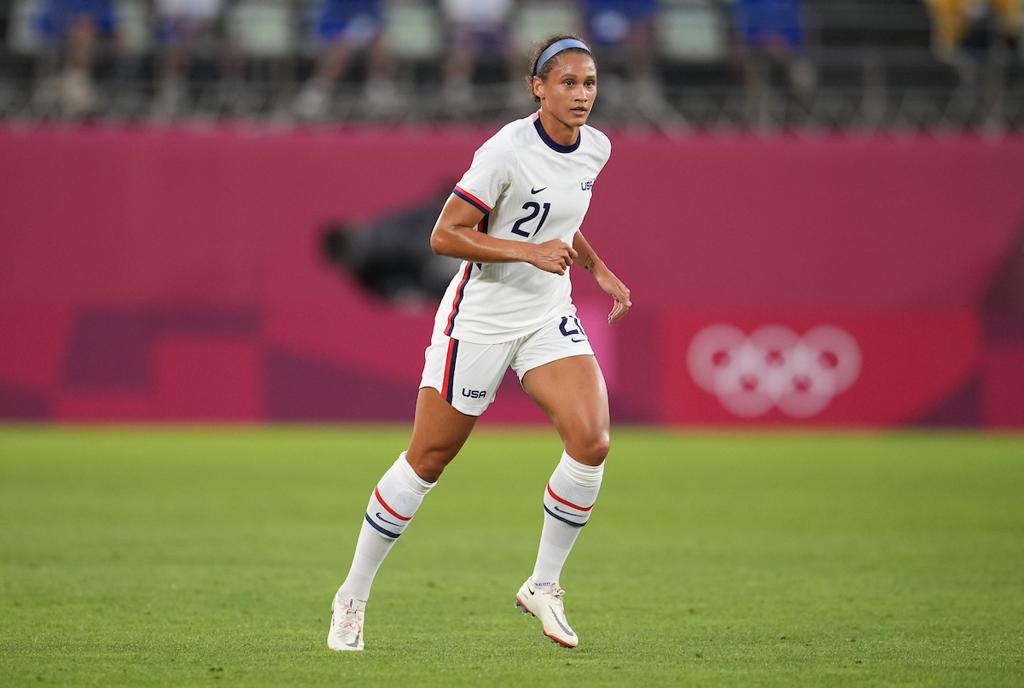 Cary, NC (July 30, 2021) - After making a convincing case to be included on the United States’ Olympic roster — including a game-winning goal in an Olympic qualifier against Canada and two goals during friendlies against Colombia and Nigeria — Courage forward Lynn Williams was named an alternate for the 2020 Games in Tokyo. With that role, Williams would be a part of the delegation traveling to Tokyo, however with the 18-women roster rule at the time, her chances of seeing the field in an Olympic match seemed slim.

“It was a bittersweet feeling, but I quickly realized how honored I am to still be a part of the delegation and how proud I am of myself to even be in this position to help the rest of the team,” Williams recently said on her podcast Snacks that she co-hosts with teammate Sam Mewis. “We have an Olympics to win, and I’m going to stay ready, stay prepared so that if my name is called, I can be the best Lynn I can be,” — and that she did.

Following the Olympic roster announcement, Williams went on to tally four goals in two games for the Courage before heading to Tokyo with the national team, putting those that had doubted her on notice. Unbeknownst to Williams at the time, she would have her opportunity to represent the United States on the Olympic stage when, on July 1, Olympic soccer rosters were expanded. The new rule permitted all 22 traveling players to be available for a game roster on a match-by-match basis, citing the challenges teams would face as a result of the COVID-19 pandemic. The Fresno, CA native went on to make her Olympic debut on July 27 against Australia during the group stage of the tournament, in which the United States saw through a scoreless to draw to advance to the knockout rounds.

Two days later, on July 30, the United States took on the Netherlands in a rematch of the 2019 World Cup final, with tournament elimination on the line. It was in this high-stakes match that Williams would make her first Olympic start — and with an opportunity at hand, the forward was determined to make the most of it. Down 1-0 in the 28th minute, Williams sent in a cross from just outside the eighteen, finding Courage teammate Sam Mewis in the box. With a diving header, Mewis buried the equalizer as Williams earned the assist. Three minutes later, Williams added a goal of her own, volleying in a shot on her first touch to put the United States ahead 2-1 — completely changing the trajectory of the match in a three-minute span.

The Netherlands went on to tie the match in the early minutes of the second half, with the 2-2 score holding until regular time expired. Two overtime periods ensued, followed by penalty kicks. As the match came down to the wire, it was the United States who would emerge victorious, besting the Netherlands 4-2 behind three astounding saves from goalkeeper Alyssa Naeher. With the win, the United States advanced to the semifinals, where they will face Canada on Monday, August 2 at 4 a.m. ET.

From being named an alternate to becoming a downright game-changer, it has been quite the Olympic journey for Williams — and one that will undoubtedly continue to unfold as the tournament progresses.