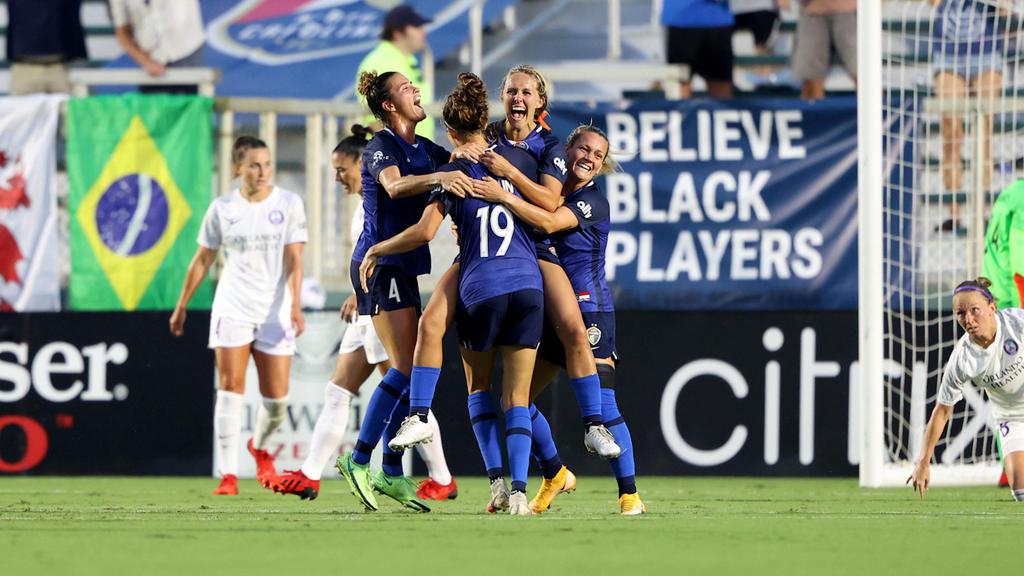 CARY, NC (July 31, 2021) - The points were shared in Cary on Saturday night as the North Carolina Courage tied the Orlando Pride, 1-1. Courage forward Brittany Ratcliffe added the equalizer, scoring her first goal of the season in the 53rd minute. Sydney Leroux scored the lone goal for the Pride. With tonight’s result, the Courage climb to fourth place in league standings, tied with the Washington Spirit at 18 points.

“I think it was a really good build-up from us, and the ball from Meredith [Speck] was absolutely perfect. We train so much touch-and-shoot, touch-and-shoot. I’m getting the credit for all my teammates there,” said Ratcliffe in a postgame interview. “It felt like we weren’t playing for the points, we were playing for each other. So that’s why it was really disappointing to not get the 3 points.”

Saturday night’s contest marked Amy Rodriguez’s first home game at Sahlen’s Stadium, as the veteran forward made her second appearance in the Courage starting lineup. Throughout the first half, Rodriguez was the catalyst for several scoring chances, nearly adding a goal herself in the 19th minute. Captain Abby Erceg also returned to the Courage lineup for the first time since departing for the Olympic Games in Tokyo on June 11th.

“The effort was brilliant. I thought we could’ve gotten all 3 tonight. So many players had big time performances,” said Head Coach Paul Riley. “I thought Angharad James had her best performance for us tonight. Carson Pickett made a big difference tonight, she was back to her best, and Abby Erceg made a big difference obviously. I feel that this point is a point gained and not two points lost.”

Sydney Leroux opened the scoring for Orlando in tonight’s match, taking a through ball from Ali Krieger in stride, having a touch and burying a shot into the far post to give the Pride a 1-0 advantage. With the goal, the forward is now tied with Ashley Hatch of the Washington Spirit for the most goals scored this season, each player registering six goals apiece.

The Courage were quick to erase the 1-0 deficit, responding with an equalizer just three minutes later. The attack began at the hands of Amy Rodriguez, who slotted a ball to Meredith Speck inside the Orlando box. Receiving the ball at her left foot, Speck slipped a short pass to Brittany Ratcliffe. With a skillful touch, Ratcliffe beat Ali Krieger in a 1v1 battle, scoring her first goal of the season and tying the game at a goal apiece in the 53rd minute. Despite several close chances as the half wound to a close, including a shot from Havana Solaun that nicked the post, neither side were able to find a game-winner as time expired.