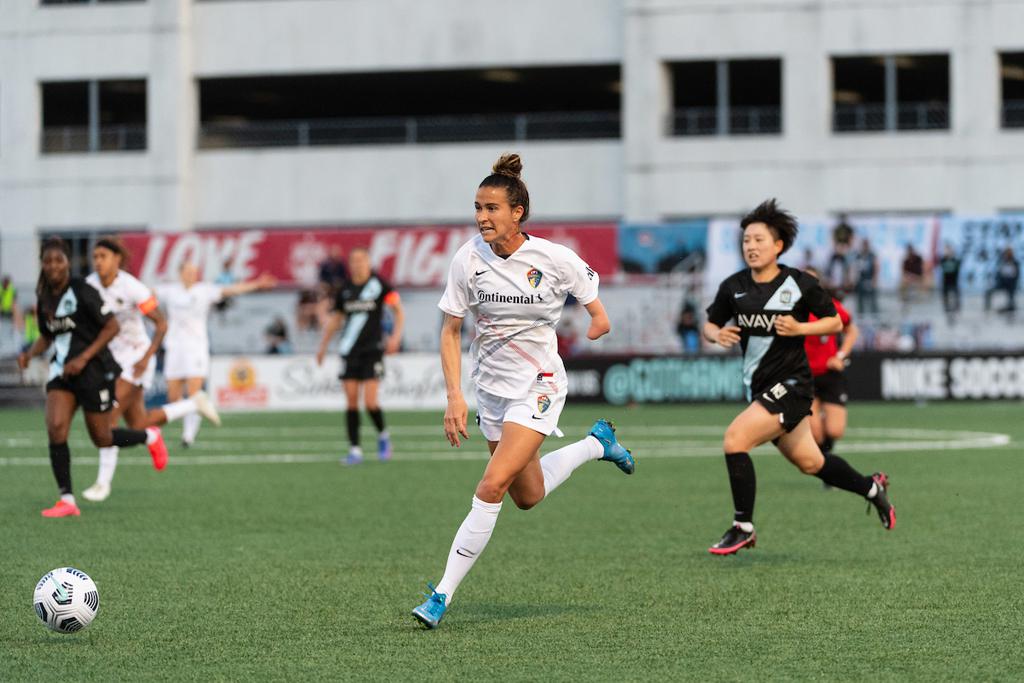 CARY, NC (August 5, 2021) - The NC Courage will travel to face NJ/NY Gotham FC on Saturday, August 7 at Red Bull Arena at 7 p.m. ET. With a win in Saturday’s matchup, the Courage can make a push for second place in league standings, leaping the Washington Spirit, the Chicago Red Stars, and this weekend’s opponent, NJ/NY Gotham FC.

The last matchup between these two teams took place during the 2021 Challenge Cup. Despite their tenacity throughout the full 90, the Courage fell to their opponent 4-3 in the final minutes of stoppage time. Jessica McDonald added a goal to her Challenge Cup tally and Debinha recorded the brace, with seven goals scored between the two teams throughout match play. Midge Purce added a brace of her own, and individual goals from Carli Lloyd and Evelyne Viens later in the match allowed for Gotham to squeak past the Courage.

Earning the nod for Baker Roofing’s Hard Working Player of the Match in last weekend’s tilt against Orlando, Erceg’s highly-anticipated return to the Courage lineup was indicative of her leadership in the backline. The New Zealand international has posted 27 clearances, five blocks, and 20 interceptions in ten matches played this season, and has maintained a 90.5% passing success rate. Erceg will look to deny Gotham FC three points this Saturday by limiting their scoring chances, making herself a key player in whether or not the Courage advance up the ladder.

A valuable piece in Gotham’s midfield, Cudjoe has maintained a 57.1% success rate in aerial duels, a 61.1% success rate in tackles, and a 79.9% passing success rate through nine appearances. The midfielder has also tallied five shots this season, two of which were on target, and has also logged five key passes, equally as involved in Gotham’s impressive attack strategy as she is in their defense. With this weekend’s result having a heavy impact on league standings, a strong performance from Cudjoe is to be expected as she will look to create scoring chances - and prevent the Courage from breaking the ice - for Gotham.

The points were shared in Cary last Saturday as the North Carolina Courage tied the Orlando Pride, 1-1. Courage forward Brittany Ratcliffe added the equalizer, scoring the first goal of her Courage career in the 53rd minute. Sydney Leroux scored the lone goal for the Pride.

“I think it was a really good build-up from us, and the ball from Meredith [Speck] was absolutely perfect. We train so much touch-and-shoot, touch-and-shoot. I’m getting the credit for all my teammates there,” Ratcliffe said in a postgame interview. “It felt like we weren’t playing for the points, we were playing for each other. So that’s why it was really disappointing to not get the 3 points.”

The contest marked Amy Rodriguez’s first home game at Sahlen’s Stadium, as the veteran forward made her second appearance in the Courage starting lineup. Throughout the first half, Rodriguez was the catalyst for several scoring chances, nearly adding a goal herself in the 19th minute. Captain Abby Erceg also returned to the Courage lineup for the first time since departing for the Olympic Games in Tokyo on June 11th.

Up Next: The North Carolina Courage will return home to face the Chicago Red Stars on Saturday, August 15 at 6 p.m. ET. Tickets are available here.