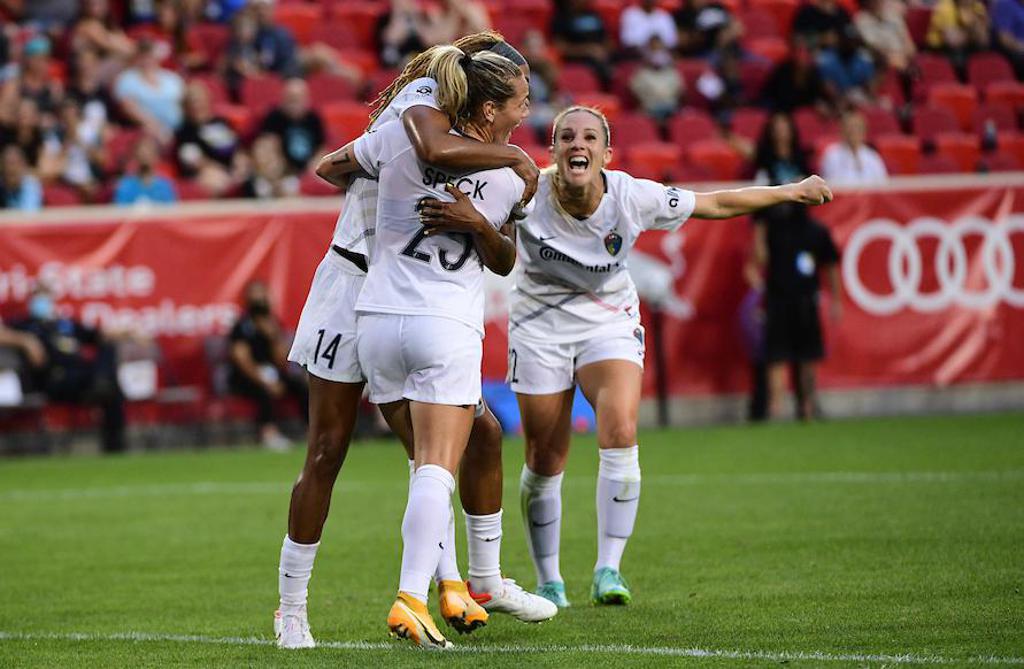 HARRISON, NJ (August 7, 2021) - A single goal was the difference maker as the North Carolina Courage defeated NJ/NY Gotham FC, 1-0, in a hard-fought contest on Saturday night. With the win, the Courage earned three points and advanced to second place in league standings, leaping the Washington Spirit, the Chicago Red Stars, and NJ/NY Gotham FC in the table. Meredith Speck added her first career goal to seal the win, as Casey Murphy logged her sixth clean sheet of the season.

“I’ve got to give a lot of credit to Paul, as he’s been insistent that the 10s get more involved on the attacking end,” said Meredith Speck following the match. “I’d love to see the tape back on the goal, because I feel like my jaw must have dropped to the floor when I saw the ball fall right at my feet. I was ready to celebrate Jess’s goal when she headed it on, but when it fell I was like ‘kick it as hard as you can.’ The more the team gels, the more we can find space. We’ve had a lot of changes in the midfield, so raising the level of comfort and chemistry between attack and midfield makes it easy for us to get forward as there’s less pressure on us.”

After spending most of the half deadlocked at 0-0, Speck finally broke the ice for the Courage in the 38th minute. The go-ahead goal began with a lofted ball from Carson Pickett, finding Jessica McDonald in the box. Redirecting a header on frame, McDonald’s attempt was met with a diving save from Gotham goalkeeper DiDi Haracic. Unfortunately for Gotham, Haracic pawed the ball directly into Speck’s path as the midfielder crashed the net, putting necessary pressure on Gotham’s defense. Capitalizing on the deflection, Speck hammered home her first career goal to give the Courage a 1-0 lead late into the half.

“That was a good, professional performance away from home. I thought we defended well, and Casey Murphy was excellent again,” said head coach Paul Riley. “I think that having a bit more possession tonight was important in pushing the ball higher up the pitch. We didn’t do a great job keeping them off the ball, but defensively we were solid and that made the difference in the end.”

The Courage will continue to hunt for points as they return home to Sahlen’s Stadium at WakeMed Soccer Park to take on the Chicago Red Stars next Sunday, August 15 at 6 p.m. ET.

- Casey Murphy made two saves to maintain the clean sheet.
- Meredith Speck made her first start of the season and scored her first career goal in tonight’s match.
- The Courage took eight shots in tonight’s game, four of which were on target.

Up Next: The North Carolina Courage will return to Sahlen’s Stadium at WakeMed Soccer Park to take on the Chicago Red Stars on Sunday, August 15 at 6 p.m. ET. Tickets can be purchased here.