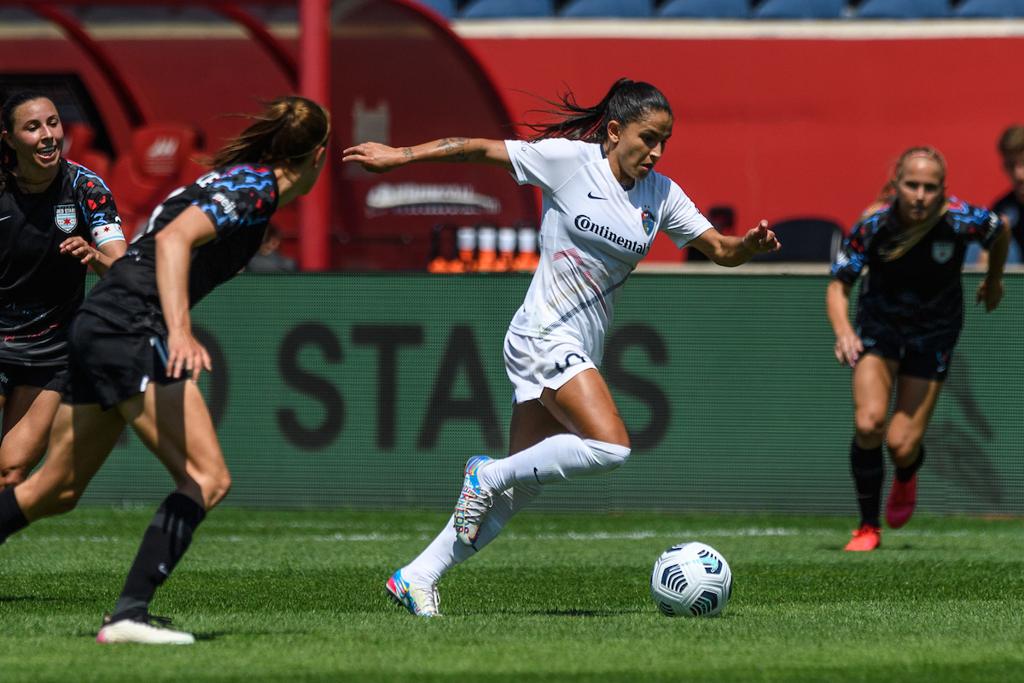 CARY, NC (August 13, 2021) - The North Carolina Courage will look for their second consecutive win as they return home to face off against the Chicago Red Stars on Sunday, August 15 at 6 p.m. ET at Sahlen’s Stadium at WakeMed Soccer Park. The match will be streamed live on Paramount+, and tickets are available for purchase here.

The last meeting between these two teams took place earlier this season, in which an unfortunate goal was the difference for their opponent through nearly 97 minutes of play. Though the match saw a stellar showing in goal from Casey Murphy and a strong performance from several second-half substitutes, the Courage were unable to find the net as the final minutes ticked away. Rachel Hill notched the lone goal for the Red Stars.

As the table stands currently, the Courage sit at second place in league standings, with seven points separating them from the first-place Portland Thorns. With a win on Sunday, the Courage can maintain their position in the table and edge closer to the top.

One of the newest additions to the Courage roster, Rodriguez has been impressive out of the gate. Most notably, however, was her performance in North Carolina’s recent match against NJ/NY Gotham FC. Paired with fellow forward Jessica McDonald, Rodriguez was one of the catalysts for Meredith Speck’s game-winning goal, creating several chances herself to break down the Gotham defense. Rodriguez will look to add her first goal in a Courage kit in Sunday’s match against Chicago, continuing to prove her explosive abilities up top.

A dangerous attacking threat for the Red Stars, forward Mallory Pugh has notched three goals and two assists so far this season for her Chicago side. Her standout offensive performance on and off the stats sheet has earned her a spot on the NWSL Team of the Month for the second time this season. Pugh’s hunger to get in behind defenses, her technical control on the ball and her ability to create dangerous opportunities may prove to be a difficult test for the Courage backline.

A single goal was the difference maker as the North Carolina Courage defeated NJ/NY Gotham FC, 1-0, in a hard-fought contest last Saturday. With the win, the Courage earned three points and advanced to second place in league standings, leaping the Washington Spirit, the Chicago Red Stars, and NJ/NY Gotham FC in the table. Meredith Speck added her first career goal to seal the win, as Casey Murphy logged her sixth clean sheet of the season.

“I’ve got to give a lot of credit to Paul, as he’s been insistent that the 10s get more involved on the attacking end,” said Meredith Speck following the match. “I’d love to see the tape back on the goal, because I feel like my jaw must have dropped to the floor when I saw the ball fall right at my feet. I was ready to celebrate Jess’s goal when she headed it on, but when it fell I was like ‘kick it as hard as you can.’ The more the team gels, the more we can find space. We’ve had a lot of changes in the midfield, so raising the level of comfort and chemistry between attack and midfield makes it easy for us to get forward as there’s less pressure on us.”

Up Next: The North Carolina Courage will remain at home to face Kansas City for the second time this season on Saturday, August 21 at 7 p.m. ET at Sahlen’s Stadium at WakeMed Soccer Park. Tickets are available for purchase here.