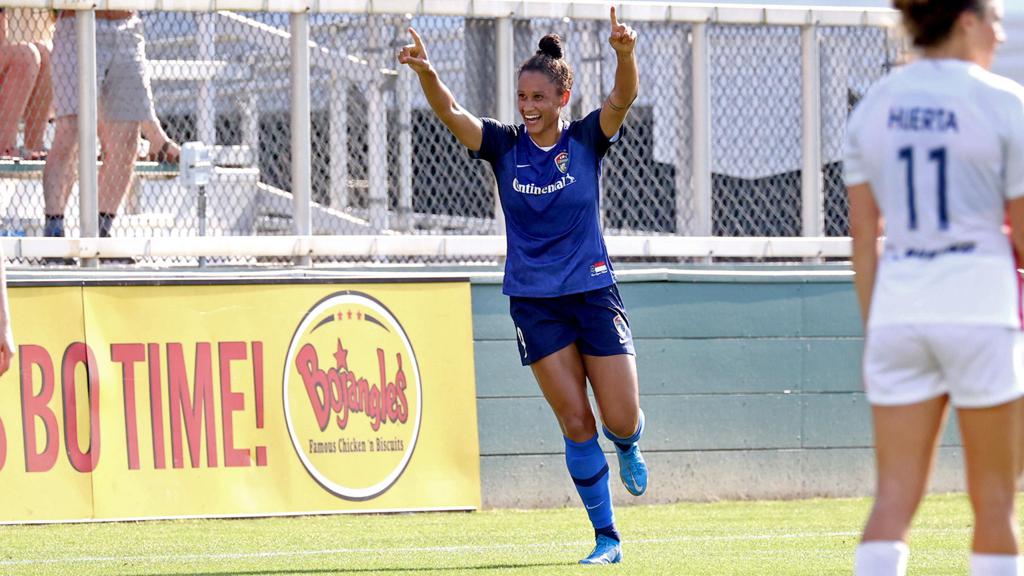 CARY, NC (August 19, 2021) - The North Carolina Courage continue their homestand as they face Kansas City for the second time this season on Saturday, Aug. 21 at 7 p.m. ET. Lynn Williams and Sam Mewis have returned stateside after winning a bronze medal with the U.S. Women’s National Team in the Tokyo Olympics. The Courage will celebrate “Olympic Welcome Back” night on Saturday, as they honor the team’s Olympians — Lynn, Sam, Debinha and Abby Erceg, although Sam is not expected to be available due to injury.

A victory in this Saturday’s match will be vital for North Carolina as the race for a playoff spot becomes increasingly competitive, and as things stand currently, the Courage sit at second place in the table. Tickets are available for purchase here.

The last matchup between these two sides saw the North Carolina Courage fight for a scoreless draw with Kansas City with only four players available off of the bench. Both sides came away with a point, as Taylor Smith and Meredith Speck made their first starts of the 2021 season and Casey Murphy recorded her fifth clean sheet, recording six saves and earning the honor of Budweiser Player of the Match.

North Carolina Courage - #9 Lynn Williams
Returning to the Courage lineup for the first time since the Olympics, Williams left the league on notice before heading off to Tokyo, scoring four goals in two of her most recent appearances. Ahead of her departure, Williams was the season’s league leader in goals scored, and even in her absence, the forward still boasts the third-most number of goals scored thus far. In Saturday’s match, the Fresno native will look to combine with Jessica McDonald and new teammate Amy Rodriguez to continue her scoring streak, challenging the Kansas City defense in a way that only one of the league’s best forwards can.

Kansas City - #99 Victoria Pickett
Scoring a goal in Kansas City’s first win over the OL Reign, Pickett continues to impress on the Kansas City backline. The defender has posted thirteen clearances, five blocks, and fourteen interceptions on the season, and has maintained an 85.7% passing success rate. In Saturday’s match, Pickett will look to shut down the trifecta of Rodriguez, McDonald, and Williams, which will prove a challenging task as the Courage push for their third consecutive win.

Last Time Out
The North Carolina Courage defeated the Chicago Red Stars, 1-0, in front of their home crowd last Sunday. With the win, the Courage remain in second place in league standings, shrinking the gap that lies between them and the first-place Portland Thorns to five points. The match featured a huge performance from Casey Murphy, bringing about her sixth clean sheet of the season, as well as a first Courage goal for Amy Rodriguez.

The Courage took the lead late in the first half after a handball in the box from Chicago defender Kayla Sharples led to a penalty kick. Amy Rodriguez didn’t hesitate to confidently place the ball on the spot, converting the attempt up the middle to tally her first goal in a Courage kit.

“It’s such a privilege to score, let alone play for this club,” Rodriguez said following the match. “I have all of my teammates behind me to thank, because they raise my level immensely and make me a far better player. This team has a championship mentality. It’s been clear from the day I showed up that they do things differently here, and you don’t accomplish the things that they have without that mindset.”

Up Next: The North Carolina Courage will travel to face the Washington Spirit on Sunday, August 29 at 5 p.m. ET at Audi Field in Washington, DC.