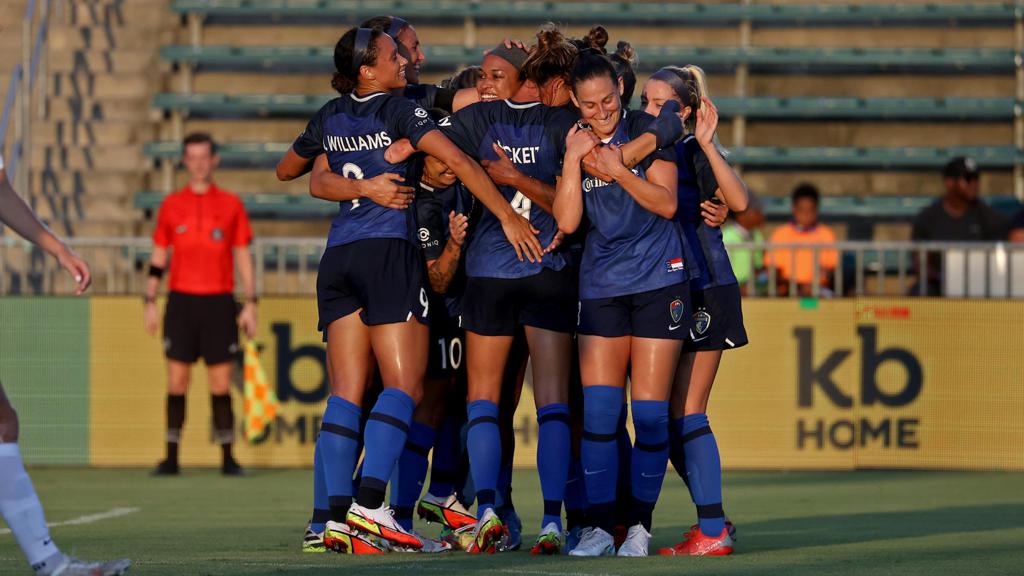 CARY, NC (August 21, 2021) - The North Carolina Courage notched their third consecutive win on Saturday night against the visiting Kansas City side, commanding the flow of the game and earning the 4-0 result. Individual goals from Lynn Williams, Jessica McDonald, Amy Rodriguez, and Meredith Speck saw through the dominant victory, with Carson Pickett tallying two assists and Ryan Williams adding her first career assist. Likewise dominant was Casey Murphy, who made nine saves to record her seventh clean sheet of the season.

Lynn Williams opened the scoring early, receiving a ball from Carson Pickett in the Kansas City box. In a display of her composure in the attacking third, Williams settled the ball at her right foot and slotted a shot into the lower 90, giving the Courage a 1-0 lead in the 12th minute of play in her first match since returning from the Olympics. With tonight’s goal, Williams joins Ashley Hatch of the Washington Spirit and Sydney Leroux of the Orlando Pride in a three-way tie for the league leader in goals scored this season. On the play, Pickett tallied her fourth assist of the season, becoming the league leader in assists.

Later, in the 21st minute, McDonald added a goal of her own to extend the Courage lead to 2-0, sending a header into the back of the net. Catalyzing the goal-scoring play, Pickett recorded her second assist of the night to bring her season assist total to five. McDonald’s goal was the 50th regular-season goal of her career, becoming the fourth player in NWSL history to achieve such a milestone, as well as the second Courage player to do so, the first being Lynn Williams.

Joining Williams and McDonald on the scoresheet, Rodriguez completed the front three trifecta in the 64th minute, one-timing a cross from Ryan Williams to score her second goal in as many games against her former team. With Rodriguez’s goal added to the mix, all three of tonight’s starting forwards netted a goal during the match.

The Courage added a fourth goal in the 90th minute, the scoring drive beginning when Taylor Smith blocked a shot just outside the Courage eighteen, the deflection landing in the path of Speck. Beating a Kansas City defender in a footrace, the midfielder took a skillful touch to beat goalkeeper Katelyn Rowland at midfield. Sending a weighted ball toward the far post, Speck capitalized on the chance to add her second career goal, sealing the dominant 4-0 win.

“Meredith Speck’s energy when she came on was spectacular,” Head Coach Paul Riley said following the match. “I thought the momentum completely changed when she came on, and we went from under pressure to applying pressure the instant she stepped on the pitch.”

- With two assists on the night, Carson Pickett is now the league leader in assists.

- Amy Rodriguez has scored a goal in two consecutive games, having scored in the Courage’s last match against the Chicago Red Stars.

- Casey Murphy made nine saves to earn her seventh clean sheet of the season.

Up Next: The North Carolina Courage will travel to face the Washington Spirit on Sunday, August 29 at 5 p.m. ET at Audi Field in Washington, DC as the squad hunts for their fourth consecutive win.