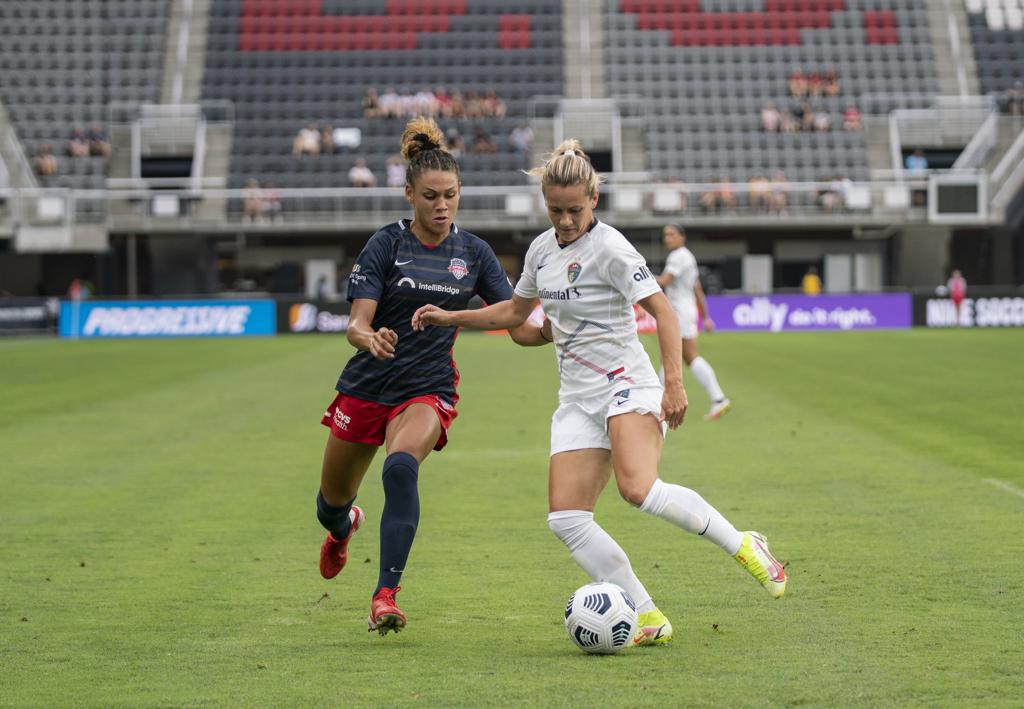 WASHINGTON, DC (August 29, 2021) - The North Carolina Courage drew against the Washington Spirit on Sunday night, earning a point to remain in second place in the standings. The match featured Casey Murphy’s league-leading ninth clean sheet of the season, as the goalkeeper recorded four saves to render the Spirit scoreless throughout the contest. Kendall Fletcher also made her Courage debut, entering the game as a second-half substitute for Merritt Mathias, and the backline pieced together a solid performance to maintain the result.

“It was great to get on the field again. I was really happy with how we defended as a team, and of course happy with the clean sheet,” Diane Caldwell said following the match. “The back three was a bit of a last-minute decision. In our last game against them they had much more freedom through the middle, and I think that we did a great job of stifling that tonight. It’s a really competitive squad and everybody’s playing really well. You have to stay ready, and when your opportunity comes you have to take that.”

The Courage offense catalyzed several chances in the second half, the closest of those beginning with a long ball sent upfield to Debinha. The Brazilian international was able to get a single touch on the ball before being taken down in the box by Spirit goalkeeper Aubrey Bledsoe, snuffing out the play and leaving the ball to be cleaned up by the Spirit’s defense in front of an open net. Despite a flurry of opportunities for both sides, neither team was able to capitalize on a go-ahead goal as the match ended in a 0-0 deadlock.

“The extra player in the back certainly helped us get the clean sheet, but we didn’t have enough from an attacking point of view,” Head Coach Paul Riley said. “The decision to change the formation to a 3-4-1-2 came only about 48 hours ago, but the work rate from the entire team was phenomenal throughout the match. An away clean sheet will always be a good result, so we can’t complain about that. We’re still a bit dysfunctional in the front, though I thought Debinha had a solid game tonight. I believe Sam Mewis rejoining that group will make our play in the attacking third a lot more dynamic, but I’m still happy with the performances we’ve seen from the players that have come in in the past several weeks.”

Up Next: The North Carolina Courage will continue their stint on the road to face Kansas City for a third time this season on Sunday, September 5 at 7 p.m. ET at Legends Field in Kansas City, KS. The match will air on Paramount+.