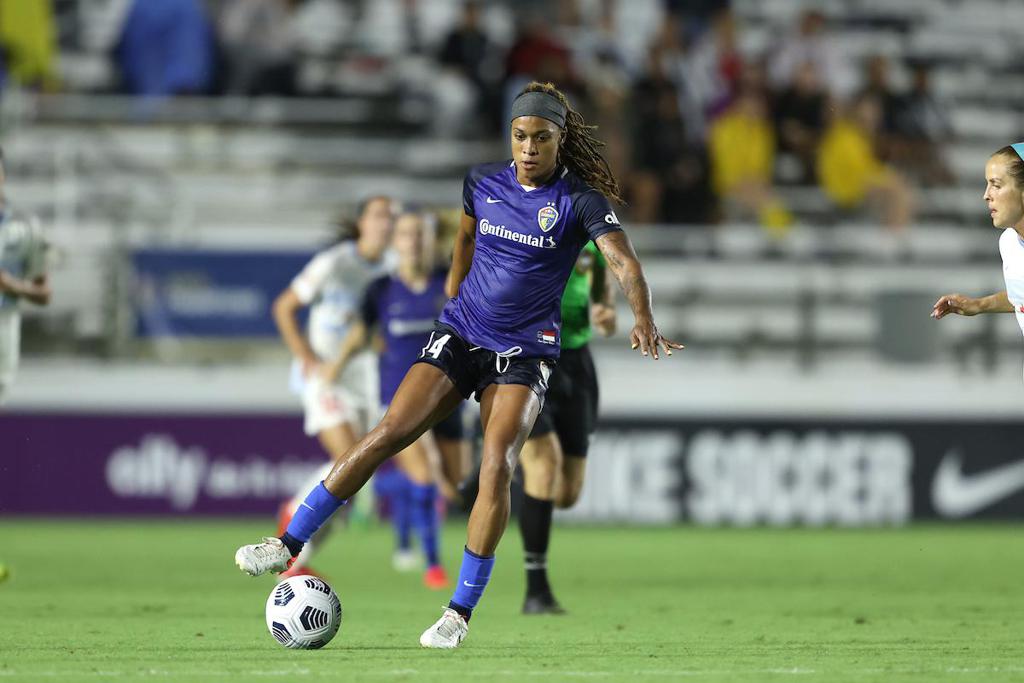 CARY, NC (September 3, 2021) - The North Carolina Courage will look to continue their undefeated streak as they travel to face Kansas City for the third time this season on Sunday, Sept. 5 at 7 p.m. ET. As the table stands currently, the Courage sit at second place in the standings, with OL Reign hot on their heels. Four points separate the North Carolina side from the first-place Portland Thorns, and with three points in Sunday’s contest, the Courage could begin to close this gap.

The last matchup between these two sides saw the Courage notch a dominant win, commanding the flow of the game and earning the 4-0 result. Individual goals from Lynn Williams, Jessica McDonald, Amy Rodriguez, and Meredith Speck saw through the dominant victory, with Carson Pickett tallying two assists and Ryan Williams adding her first career assist. Likewise dominant was Casey Murphy, who made nine saves to record her seventh clean sheet of the season.

McDonald notched her 50th career goal in the Courage’s last meeting with Kansas City, an integral part of the commanding 4-0 win and the completion of a front-three trifecta alongside Lynn Williams and Amy Rodriguez, who also added individual goals. In 990 minutes played this season, McDonald has recorded three goals, two assists, nineteen key passes, and eight successful crosses, her statistics painting a clear picture of her value in the attacking third. The Phoenix native will look to lead the Courage to a vital three points against Kansas City this weekend, and perhaps add to her season goal tally in the process.

An instantaneous difference-maker from the time she first sported a Kansas City jersey, Hamilton added her first goal with her new club in a win over Racing Louisville FC. In that same performance, the forward took four shots, leading the offense in chances created. This season, Hamilton has tallied 24 total shots, sixteen of which were on target, and has converted two goals. The offensive pairing of Hamilton and teammate Hailie Mace has proven a challenge for defenses across the league, and the Courage backline is no exception in this weekend’s tilt as Kansas City looks to add their third win of the season.

The North Carolina Courage drew against the Washington Spirit last weekend, earning a point to remain in second place in the standings. The match featured Casey Murphy’s league-leading ninth clean sheet of the season, as the goalkeeper recorded four saves to render the Spirit scoreless throughout the contest. Kendall Fletcher also made her Courage debut, entering the game as a second-half substitute for Merritt Mathias, and the backline pieced together a solid performance to maintain the result.

“It was great to get on the field again. I was really happy with how we defended as a team, and of course happy with the clean sheet,” Diane Caldwell said following the match. “The back three was a bit of a last-minute decision. In our last game against them, they had much more freedom through the middle, and I think that we did a great job of stifling that. It’s a really competitive squad and everybody’s playing really well. You have to stay ready, and when your opportunity comes you have to take that.”

The Courage offense catalyzed several chances in the second half, the closest of those beginning with a long ball sent upfield to Debinha. The Brazilian international was able to get a single touch on the ball before being taken down in the box by Spirit goalkeeper Aubrey Bledsoe, snuffing out the play and leaving the ball to be cleaned up by the Spirit’s defense in front of an open net. Despite a flurry of opportunities for both sides, neither team was able to capitalize on a go-ahead goal as the match ended in a 0-0 deadlock.

Up Next: The North Carolina Courage will return to Sahlen’s Stadium at WakeMed Soccer Park to take on the Portland Thorns in a top-of-the-table clash on Sunday, September 12 at 3 p.m. ET. Tickets are available here.