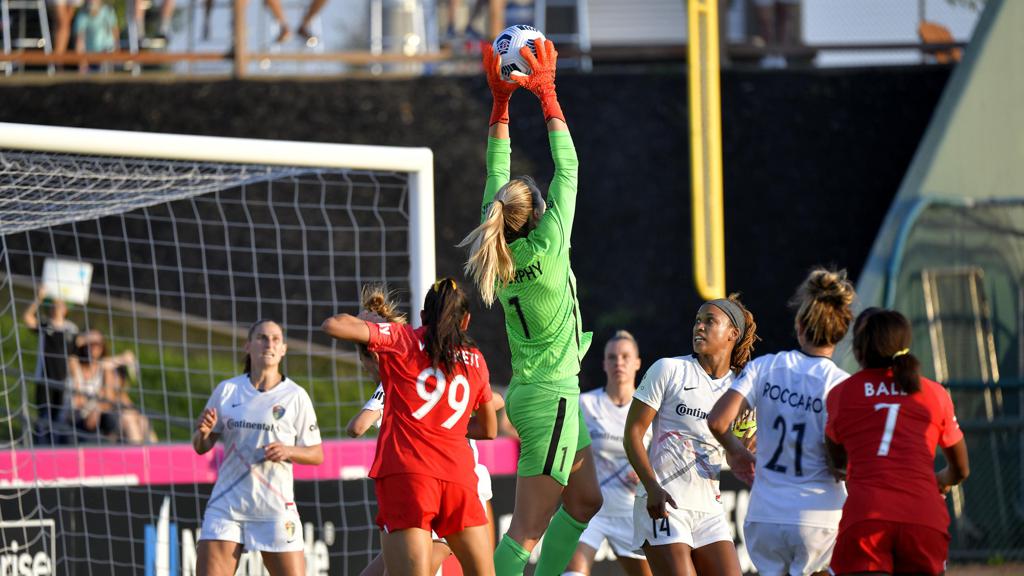 KANSAS CITY, KS (September 5, 2021) — The North Carolina Courage saw through a second scoreless draw against Kansas City on Sunday night, featuring another standout performance from goalkeeper Casey Murphy, who denied Kansas City six opportunities for a go-ahead goal to add her fourth clean sheet in as many games. Lindsay Agnew made her season debut in tonight’s match, returning to the pitch for the first time since sustaining an injury earlier this year. With the point, the Courage return to second place in league standings, deadlocked with OL Reign at 29 points apiece and separated by goal differential.

“Goes without saying that Casey’s been incredible nearly every game this season,” said Merritt Mathias following the match. “She’s a force back there, and to have her ability in goal means that we can be more confident in how we play our game. We decided to switch up the formation a few days ago due to some injuries we were working with. Carson and I became the two center backs, which I’ve never done before. We just tried to come out and be big defensively.”

Head Coach Paul Riley echoed Mathias’s sentiments about Murphy, saying, “Casey’s save at the end of the first half was world-class. I think she’s more than proved that she’s deserving of a call-up to the national team, and each of her performances this season has backed that up. She’s the best American keeper for me at the moment, and the dominant manner in which she plays surely must have been noticed by the national team by now.”

A flurry of chances from both sides highlighted the first and second halves as the Courage tallied five shots on goal, challenging Kansas City goalkeeper Adrianna Franch in the final third. Likewise holding down the net was Casey Murphy, who made six saves to preserve her league-leading tenth clean sheet of the season. Following tonight’s result, Murphy has not conceded a goal since July 31, maintaining an 88.8% success rate in saves.

“I just remembered being dialed in and staying focused. In the formation that we were in, more communication is required, and I thought that they did a great job tonight,” Murphy said. “In this formation, a lot of players are playing in positions they’re not used to playing. For me, it’s more of the same. My job is to keep the ball out of the net, and if we can leave the game without the other team scoring then I’ll be happy.”

Up Next: The North Carolina Courage will return to Sahlen’s Stadium at WakeMed Soccer Park to face the league-leading Portland Thorns on Sunday, September 12 at 3 p.m. ET. Tickets are available here.