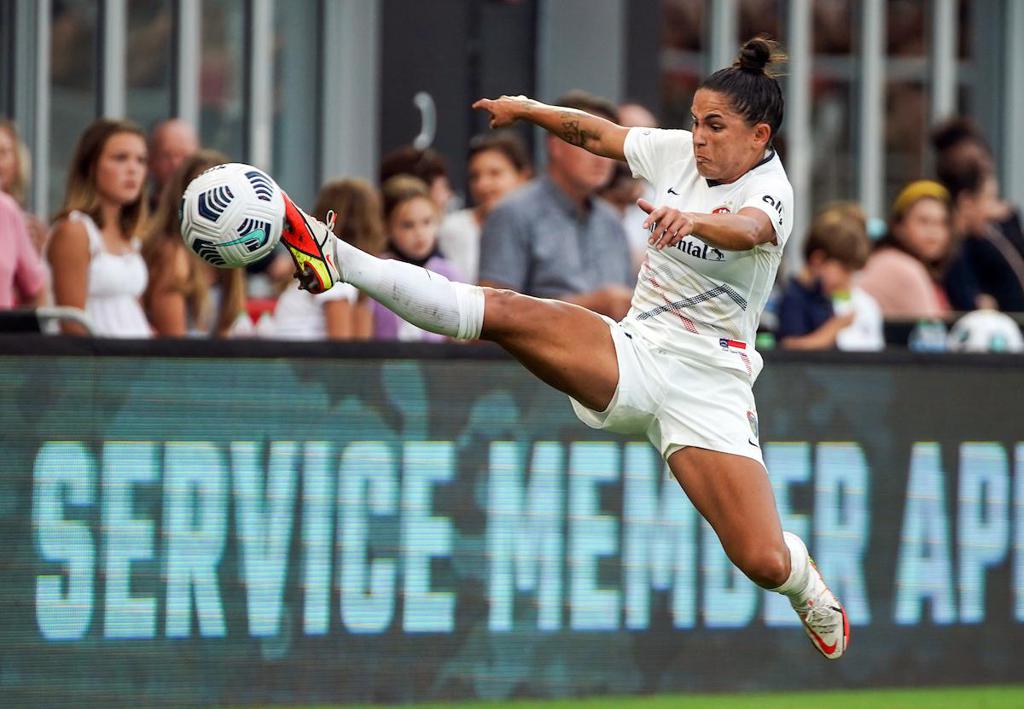 CARY, NC (September 10, 2021) - Building off of the momentum from their seven-game unbeaten streak, the North Carolina Courage are returning to their home stadium to take on the visiting Portland Thorns at home on Sunday, September 12 at 3 p.m. ET for a top-of-the-table tilt. Should the Courage win Sunday’s match, they will close the point gap that lies between the North Carolina side and the Thorns, deadlocking the two teams at 32 points apiece. Tickets are available for purchase here.

The last meeting between the two teams took place earlier this season, in which the North Carolina Courage bested their league foe 2-0 in front of their home crowd. Lynn Williams recorded the brace and Carson Pickett added both assists. Casey Murphy posted her the clean sheet, making four saves to render the Thorns scoreless throughout the contest.

Where to Watch: CBS Sports Network and Twitch (International)

A proven difference-maker in the midfield, Debinha consistently utilizes her speed, quick footwork, and sharp passing ability to wreak havoc in both the defensive and attacking thirds. In such a crucial match for the Courage, the Brazilian international will look to add to her season goal and assist tallies, placing pressure on the Thorns backline and combining with teammates Lynn Williams, Jessica McDonald, and Amy Rodriguez to lead the charge on the attack while also contributing defensively. With the win, a chance to move into a deadlock for first place is at hand, and the Courage have historically pieced together some of their best performances against their league foe. Debinha is no exception.

One of the Thorns’ most effective players on offense, Sinclair has appeared in eight matches for Portland this year, scoring three goals in 680 minutes of playing time. The Canadian international has posted 23 shots this season, 9 of which were on target, and has recorded twelve key passes, consistently posting standout performances. Sinclair will pose a significant challenge to the Courage backline in this weekend’s tilt, and with their spot at first place in the table at stake, the forward will look to capitalize on any scoring opportunities she receives.

The North Carolina Courage saw through a second scoreless draw against Kansas City last Sunday, featuring another standout performance from goalkeeper Casey Murphy, who denied Kansas City six opportunities for a go-ahead goal to add her fourth clean sheet in as many games. Lindsay Agnew made her season debut during the match, returning to the pitch for the first time since sustaining an injury earlier this year. With the point, the Courage return to second place in league standings, deadlocked with OL Reign at 29 points apiece and separated by goal differential.

“Goes without saying that Casey’s been incredible nearly every game this season,” said Merritt Mathias following the match. “She’s a force back there, and to have her ability in goal means that we can be more confident in how we play our game. We decided to switch up the formation a few days ago due to some injuries we were working with. Carson and I became the two center backs, which I’ve never done before. We just tried to come out and be big defensively.”

Up Next: The North Carolina Courage will travel to face NJ/NY Gotham FC on Saturday, September 25 at Red Bull Arena in Harrison, New Jersey at 3 p.m. ET. The match will air on Paramount+.