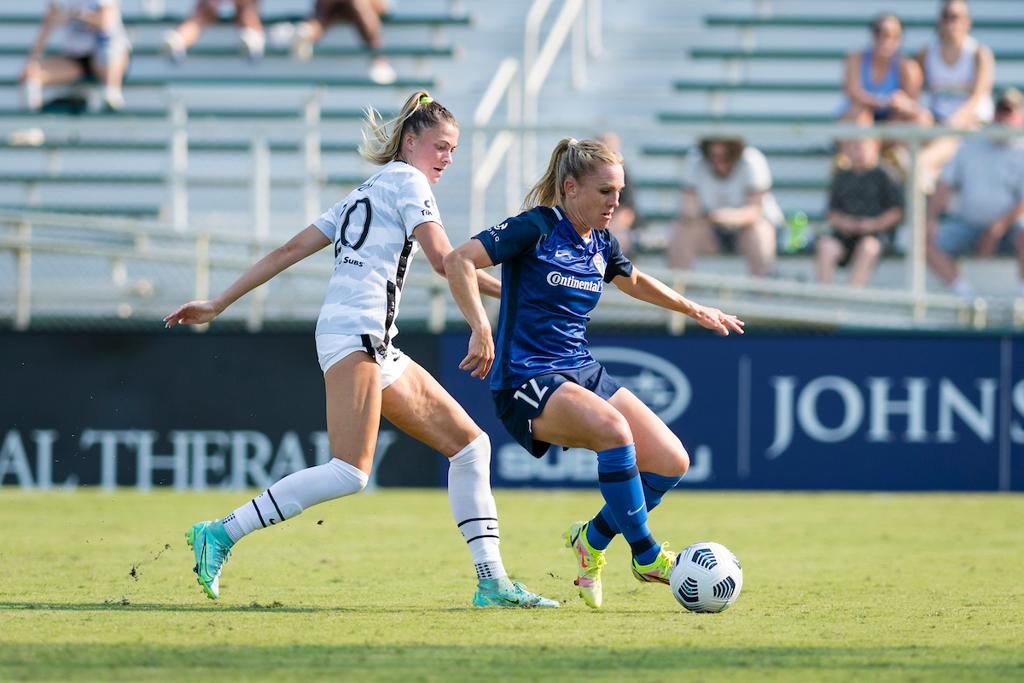 CARY, NC (September 12, 2021) — The North Carolina Courage fell to the visiting Portland Thorns, 1-0, in a hard fought defensive battle at Sahlen’s Stadium on Sunday afternoon. Despite creating several dangerous offensive opportunities throughout the match, the Courage were unable to capitalize on their chances. As a result, the Courage drop to third place in the league standings with 28 points, behind OL Reign and Portland.

Courage goalkeeper Casey Murphy maintained her dominance in net throughout the majority of the match as she faced 24 total shots, with eight on frame. The best chance of the first half for the Courage side came from forward Jessica McDonald, who got on the end of a lofted service ball over the backline from Cari Roccaro. McDonald settled the ball under pressure, getting a shot off on frame, only to have it saved by Thorns keeper Bella Bixby.

After a slow start to the second half from both teams, Portland broke the deadlock in the 57th minute as striker Sophia Smith ran onto a ball served in from Portland midfielder Christine Sinclair. Smith drove the ball into the box and managed to poke it past Murphy to give the visiting team the lead.

The best chance of the second half for the Courage came in stoppage time as Taylor Smith broke through midfield pressure, taking on four defenders before sliding a pass through to Amy Rodriguez whose shot found the hands of goalkeeper Bella Bixby.

“I think everyone would just put their hand up and say ‘we didn’t play well enough today,’” Courage defender Carson Pickett said following the match. “I definitely think they played better than us, we just didn’t create enough chances and obviously letting a goal in is tough to come back from, but hopefully next time we play them we can get on top and score early.”

“Yeah, it wasn’t a good enough performance today,” Head Coach Paul Riley said. “We didn’t create enough chances and the ones we did, we didn’t put them away. They deserved to win the game, we didn’t play anywhere near how we can play. There were still some bright spots, I thought Denise O’Sullivan was back to her best today, Kaleigh Kurtz is coming into form and Lynn Williams is finding her stride again, so all of that was good to see.”

Up Next: The Courage will travel up to New Jersey to face NJ/NY Gotham FC on Saturday, September 25, at 3 p.m. ET. The match will air live on Paramount+.