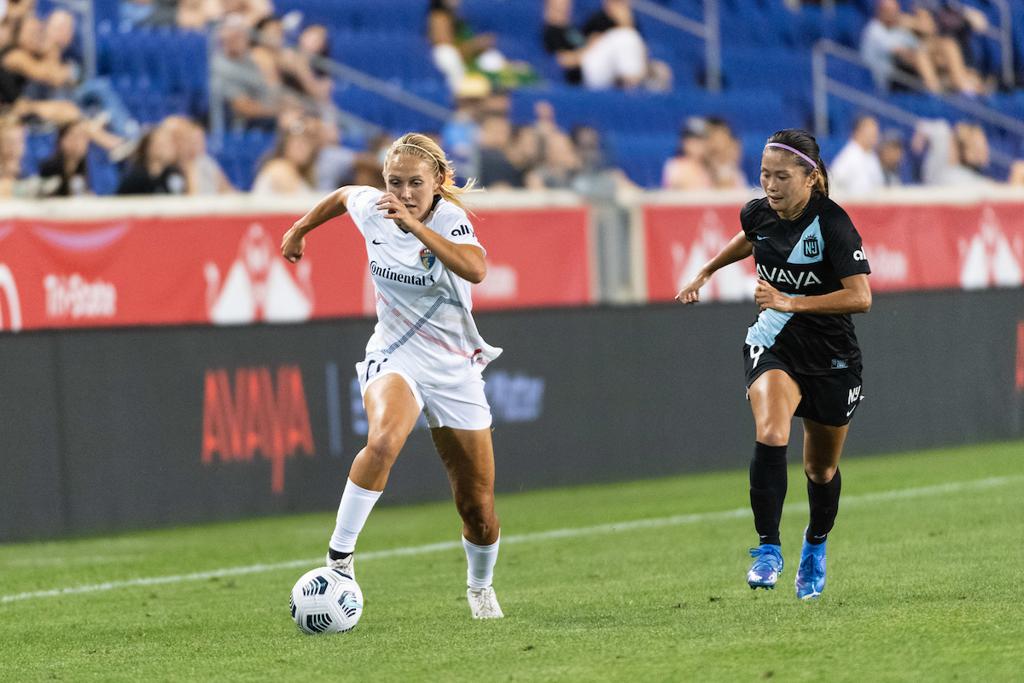 CARY, NC (September 23, 2021) - The NC Courage will travel to face NJ/NY Gotham FC on Saturday, September 25 at Red Bull Arena at 3 p.m. ET. With a win in Saturday’s matchup, the Courage can make a push to tie the OL Reign at second place in league standings with 32 points. A first-round bye in the NWSL playoffs could also be in the cards for the North Carolina side as the regular season wraps at the end of October.

The last matchup between these two teams took place in early August, in which a single goal was the difference-maker as the Courage defeated Gotham 1-0. Meredith Speck added her first career goal to seal the win, as Casey Murphy logged her sixth clean sheet of the season. The go-ahead goal began with a lofted ball from Carson Pickett, finding Jessica McDonald in the box. Redirecting a header on frame, McDonald’s attempt was met with a diving save from Gotham goalkeeper DiDi Haracic. Haracic pawed the ball directly into Speck’s path as the midfielder crashed the net, putting necessary pressure on Gotham’s defense and capitalizing on the deflection.

A standout piece of the Courage backline, Kurtz has played an integral defensive role in tandem with captain Abby Erceg. Through eighteen matches played, the Courage defense has only allowed ten goals against this season, the least of any team in the league. That being said, Gotham brings several offensive challengers to this weekend’s match, including Midge Purce, Carli Lloyd, and Ifeoma Onumonu, all of whom have scored valuable goals for Gotham FC this season. Kurtz will look to bolster the Courage defense and limit scoring opportunities for their opponent as the North Carolina side continues to hunt for points.

This weekend’s match marks the return of several international NWSL stars, including Carli Lloyd, who shone in two friendlies for the US Women’s National Team. In a friendly against Paraguay, Lloyd bagged five goals, nearly breaking the USWNT record for most goals scored in a single game. Though Lloyd has only scored one goal for Gotham this season, her performance over the international break proves her lethality in the attacking third. Lloyd will look to add her name to the scoresheet against the Courage this weekend as Gotham scrambles to remain in playoff contention, as the squad currently sits at eighth place in the table.

The North Carolina Courage fell to the visiting Portland Thorns, 1-0, in a hard-fought defensive battle at Sahlen’s Stadium on September 12. Despite creating several dangerous offensive opportunities throughout the match, the Courage were unable to capitalize on their chances.

Courage goalkeeper Casey Murphy maintained her dominance in net throughout the majority of the match as she faced 24 total shots, with eight on frame. The best chance of the first half for the Courage side came from forward Jessica McDonald, who got on the end of a lofted service ball over the backline from Cari Roccaro. McDonald settled the ball under pressure, getting a shot off on frame, only to have it saved by Thorns keeper Bella Bixby.

“Yeah, it wasn’t a good enough performance today,” Head Coach Paul Riley said following the match. “We didn’t create enough chances and the ones we did, we didn’t put them away. They deserved to win the game, we didn’t play anywhere near how we can play. There were still some bright spots, I thought Denise O’Sullivan was back to her best today, Kaleigh Kurtz is coming into form and Lynn Williams is finding her stride again, so all of that was good to see.”

Up Next: The North Carolina Courage will return to Sahlen’s Stadium at WakeMed Soccer Park to take on the Washington Spirit on Friday, October 1 at 7 p.m. Tickets are available here.