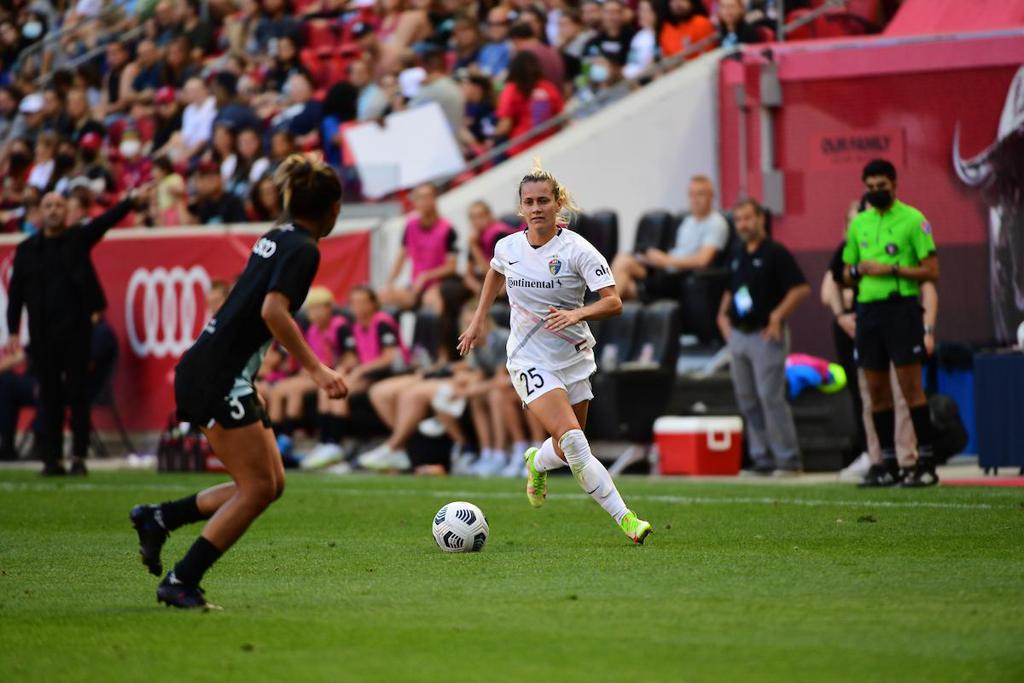 HARRISON, NJ (September 25, 2021) -  The North Carolina Courage fell to NJ/NY Gotham FC, 3-1, on Saturday afternoon in their first match since the international break. Angharad James scored her first NWSL goal during the contest, and Carli Lloyd, Margaret Purce, and Paige Monahan tallied individual goals for Gotham to win the match. Paul Riley’s team will look to recover today’s loss as they return home to take on the Washington Spirit next Friday.

“To be honest, I haven’t scored a goal in quite a while,” said Angharad James following the match. “I have a little brother who’s five, and he scored his first goal and earned Man of the Match in his game this morning. My dad said to me, ‘This is going to be your first goal today as well,’ so it was such a nice moment when I scored, you know, I just thought of my little brother and my family. Unfortunately, we couldn’t carry on and get the result we wanted, and there were parts of the play I thought were really good, but there are areas we need to improve on.”

“We had some good moments, but the penalty changed the whole game. We just didn’t create enough chances from our possession,” said Head Coach Paul Riley. “I think we played better than we did when we beat [Gotham] 1-0. You don’t want to be chasing games in this league, it’s the worst thing [you can do] to leave yourself vulnerable. We faltered in big moments and gave up some goals in big moments, and you’ll pay the price for that in this league.”

Angharad James opened the scoring for the Courage, with the goal-scoring play beginning with a cross from Ryan Williams on the right flank. Though first cleared out by Gotham’s defense, Williams’ ball was ultimately trapped by James just outside the eighteen. With her second touch, James buried a shot past goalkeeper Kailen Sheridan and into the lower 90, scoring her first NWSL goal to give the Courage the 1-0 advantage in the 20th minute.

Later, a penalty call would allow Gotham a chance at an equalizer, as a back-and-forth battle between Diane Caldwell and Margaret Purce resulted in a penalty kick for the opponent. Carli Lloyd took the kick, scoring her second goal of the season to knot the score at 1-1 in the 28th minute. Margaret Purce added Gotham’s second goal of the match eight minutes later, capitalizing on a cross from Ifeoma Onumnu to put Gotham ahead entering into halftime.

Paige Monahan netted a third goal for Gotham in the 82nd minute, receiving a ball upfield from Evelyne Viens, taking it in stride, and slotting home a shot to cushion NJ/NY’s lead, 3-1. Despite the Courage’s best efforts to edge into Gotham’s lead, the North Carolina side was unable to gain the upper hand as the final minutes slipped away.

Up Next: The North Carolina Courage will return to Sahlen’s Stadium at WakeMed Soccer Park to take on the Washington Spirit on Friday, October 1 at 7 p.m. Tickets are available here.