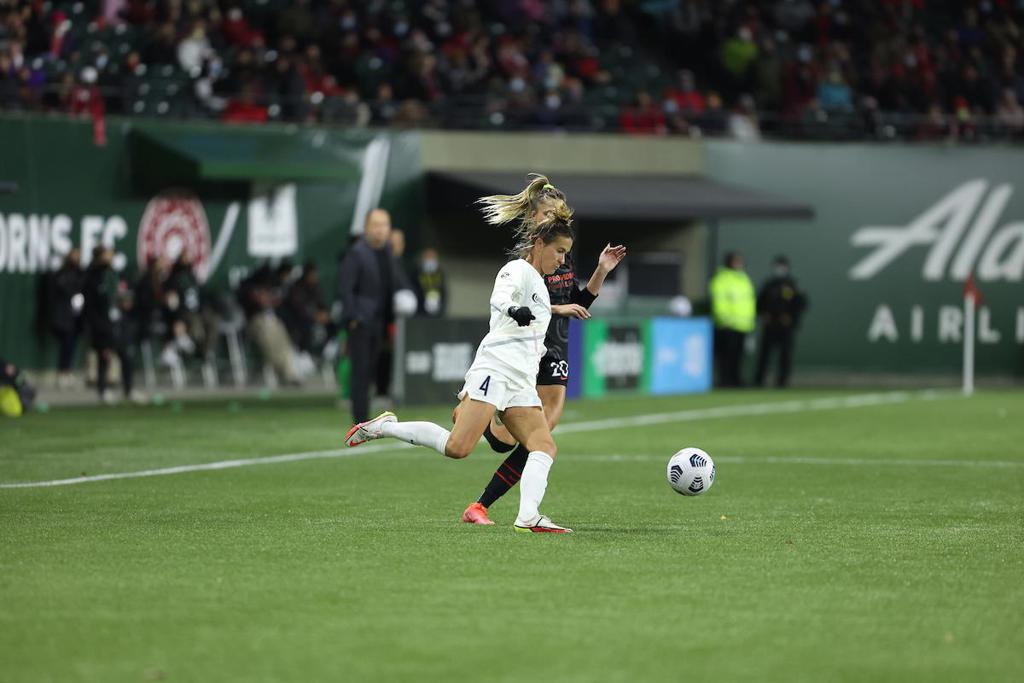 Portland, OR (October 30, 2021) - The North Carolina Courage saw through a scoreless draw against the Portland Thorns in a hard-fought battle on Saturday night, rendering their rivals scoreless to keep their playoff hopes alive. With the clean sheet in tonight’s match, Casey Murphy has now tied Adrianna Franch’s record for most clean sheets in a single season with eleven. As things stand currently, the Courage will advance to the NWSL playoffs if the Houston Dash lose in tomorrow’s match against the Washington Spirit.

“Overall, I thought it was a good performance by the team,” said Denise O’Sullivan following the match. “A few players have been away on international duty, and obviously the team has been apart...well, a few of us...for ten days now, so to come in and play like that, I think the team was relentless tonight. There was a lot of energy, the only thing that let us down was trying to get the ball in the back of the net. I’m proud of the girls. We gave everything that we could tonight, and that’s all we could do. I don’t want the season to finish yet, hopefully things go our way and we can be together for another week at least.”

“I think the players were brilliant,” Interim Head Coach Sean Nahas said. “A lot of the players have shown, as they have for the past four weeks, tons of character and resilience. Before the game, we talked about being backed into a corner and there’s only one way out, and that’s through everybody. The game had ebbs and flows, I felt that for the first part of the half we were very, very good, and then Portland got a grasp of the game and so the game was sort of ups, downs, and waves. [The players] have done everything that I’ve asked of them, and I’ve told them how proud I am of them. I have a feeling we’ll have another week together, I want another week together. I feel like today marked a massive thing for the players in terms of turning that corner.”

An early goal from Kaleigh Kurtz was called offside in the opening minutes of the match, preventing the Courage from gaining the upper hand and building their momentum. Two minutes later, Amy Rodriguez took a chance from just outside the eighteen, but to no avail as her shot skimmed over the crossbar. The remainder of the half was marked by a flurry of chances from both teams, but neither side was able to convert a go-ahead goal as the first half concluded in a 0-0 deadlock.

The 0-0 scoreline would hold through the rest of the match despite unrelenting offensive pressure from Jessica McDonald and Debinha during the second half. Characteristic of any rivalry matchup, the contest required solid defensive composure from both sides throughout the entirety of the match, something that both the Courage and Thorns were able to deliver. Tonight’s result marks the first time in league history that a match between the North Carolina Courage and the Portland Thorns has ended in a 0-0 score.