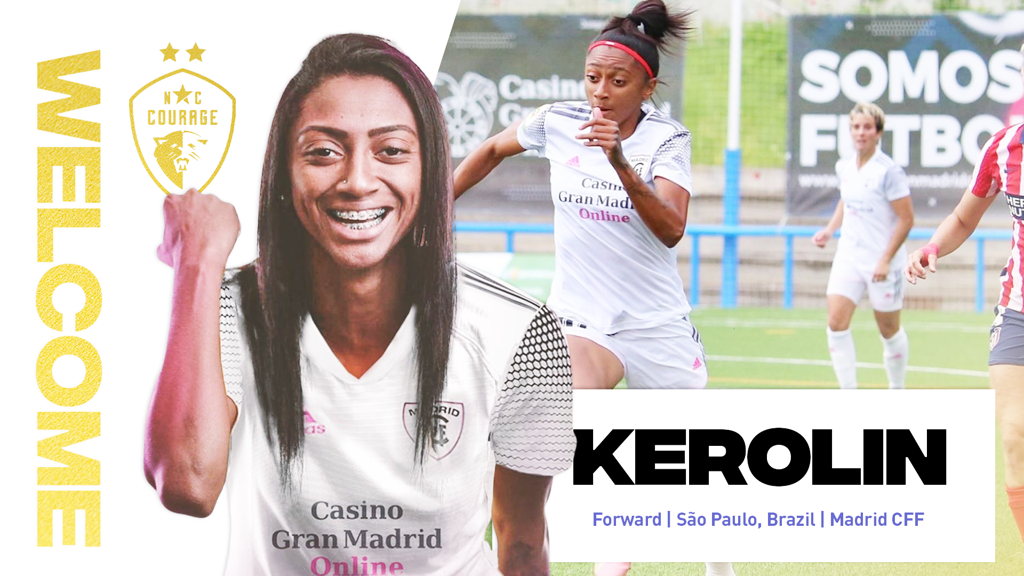 CARY, NC (January 10, 2022) - The North Carolina Courage today announced that they have signed forward Kerolin Nicoli Israel Ferraz to a three-year contract. The Courage utilized allocation funds to buy out the remainder of her contract with Madrid Club de Fútbol Femenin.

“The addition of Kerolin is one we are really excited about,” said Head Coach Sean Nahas. “She is a dynamic player who is extremely dangerous in the final third. She is a technically proficient player who will add a lot to our attacking side of the game. Her recent rise on the international stage, both for national team and club, was something that caught the club’s attention. Having the chance to add her to our roster is something we are looking forward to.”

Kerolin signed with Madrid Club de Fútbol Femenin of the Spanish Primera División during the second half of the 2020/21 season.  Over two seasons with the club, she appeared in 24 matches for a total of 1,588 minutes of playing time, scoring five goals.

The 22-year-old has also represented Brazil on the international stage, competing in the 2016 South American U17 Women’s Championship, the 2016 FIFA U17 Women’s World Cup, and the 2018 FIFA U20 Women’s World Cup, where she scored two goals in three games. Her outstanding performance at the youth World Cup caught the attention of the senior team, as she subsequently received her first call up in September of 2018. Kerolin later earned her first cap in a friendly against England as a substitute for future Courage teammate Debinha.

“We are thrilled to add a very talented player to our Courage attack who will keep fans on the edge of their seats,” President and GM Curt Johnson said. “Kerolin has made a name for herself on the world stage and has proven she can play with the best and score goals. This investment in one of the best young players is another important step as we build our roster for 2022 and beyond.”

Most recently, Kerolin appeared in seven matches for the Brazilian senior national team over the course of 2021 and capitalized on her opportunity, scoring five goals. Ahead of her transfer to Madrid CFF last year, the young forward played with Brazilian clubs Valinhos, Ponte Preta, Palmeiras, and Osasco Audax, continually asserting her dominance and goal-scoring abilities across several teams.

Upon her emergence as a rising star on the senior national team, the forward was praised by veteran Formiga, who currently holds the record as the most-capped player on the Brazilian national team. Formiga complimented Kerolin’s talents and fearlessness, noting that she had a ‘huge future’ ahead of her and could ‘go as far as she wants [in her career].’

“Only God, my family, and my close friends know how much I struggled daily to make my dreams come true,” Kerolin said. “I have always dedicated myself to achieving great successes in my career, and today I feel honored and extremely fulfilled to join this incredible club. NC Courage supporters can expect only my best, as I am coming to this club fully dedicated to winning titles and making history.”