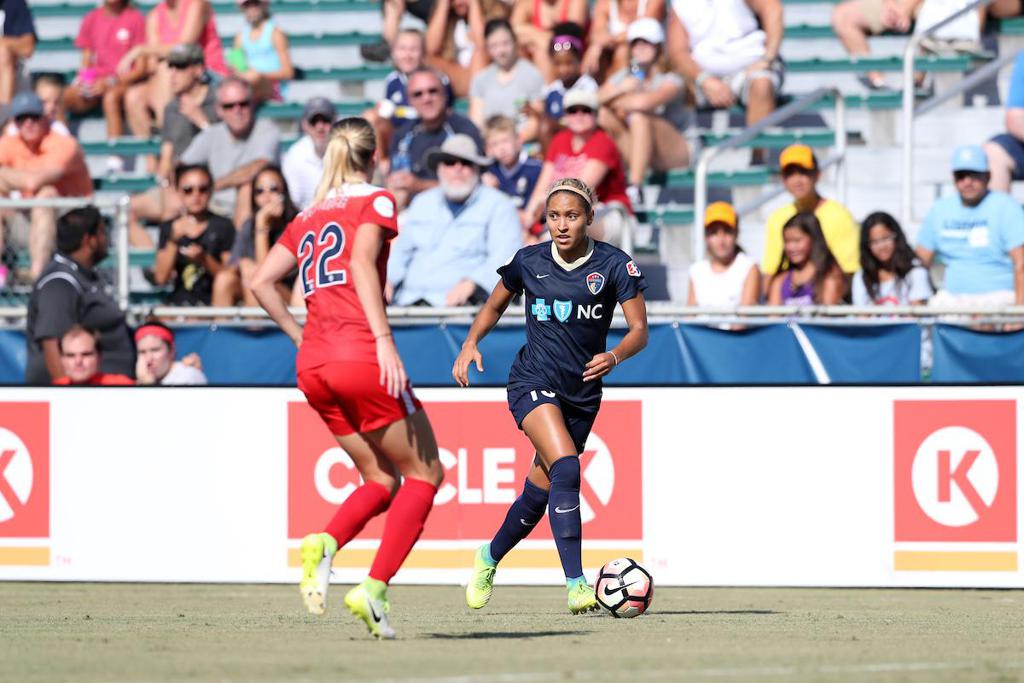 Match Preview:
The North Carolina Courage (13W-0D-5L, 39 pts, 1st place) travels north to take on the Washington Spirit (4W-4D-11L, 19 pts, 10th place) on Wednesday, Aug. 29 at 7:30 p.m. ET. The NC Courage is just two points shy of snagging a playoff spot. With a win on the road on Wednesday, the NC Courage can lock in a guaranteed top four placement in the 2017 NWSL regular season.

In its last match, the Courage defeated the Washington Spirit 2-0 in the NWSL Lifetime Game of the Week. Ashley Hatch put away the first goal just 30 seconds into the second half off of an assist from Kristen Hamilton, and a Washington Spirit own-goal in the 84th minute locked in the home team’s victory. With the win, the NC Courage earned its 10th shutout in 2017, extending its league lead to 39 points, which is five points above second-place Portland.

Washington most recently fell to the Chicago Red Stars at home on Saturday, Aug. 26 in a 2-1 defeat. After former Spirit member Kristie Mewis opened up the scoring for Chicago, Washington’s Cheyna Williams found the equalizer in the 81st minute. However, Christen Press responded and scored the winning goal for Chicago with three minutes remaining in the match.

Players to Watch:
#12 Ashley Hatch
After scoring against the Washington Spirit on Saturday, Hatch is tied with Lynn Williams for goals scored in the 2017 season with five. The rookie has made 16 appearances, starting in 10, and she is just 88 minutes shy of 1,000 minutes in her first year as a professional. Her intelligent runs and tendency to pressure the opposing backline have resulted in several scoring opportunities.

#24 Estelle Johnson
Johnson has played and started in all 19 games for the Washington Spirit this season. The NWSL veteran has been with the Spirit since 2015 and continues to bolster her team’s distribution from the backline. Johnson was named to the April and June Teams of the Month for her excellent defending and possession. Plus, she’s proven she can find the back of the net as well, considering she has two goals this season.

Coming Up Next:
After Wednesday’s game, the Courage continues its road trip to face the Chicago Red Stars on Sunday, Sept. 3 at 6 p.m. ET at Toyota Park. Fans can watch that match live on the go90 app, go90.com or NWSLSoccer.com.