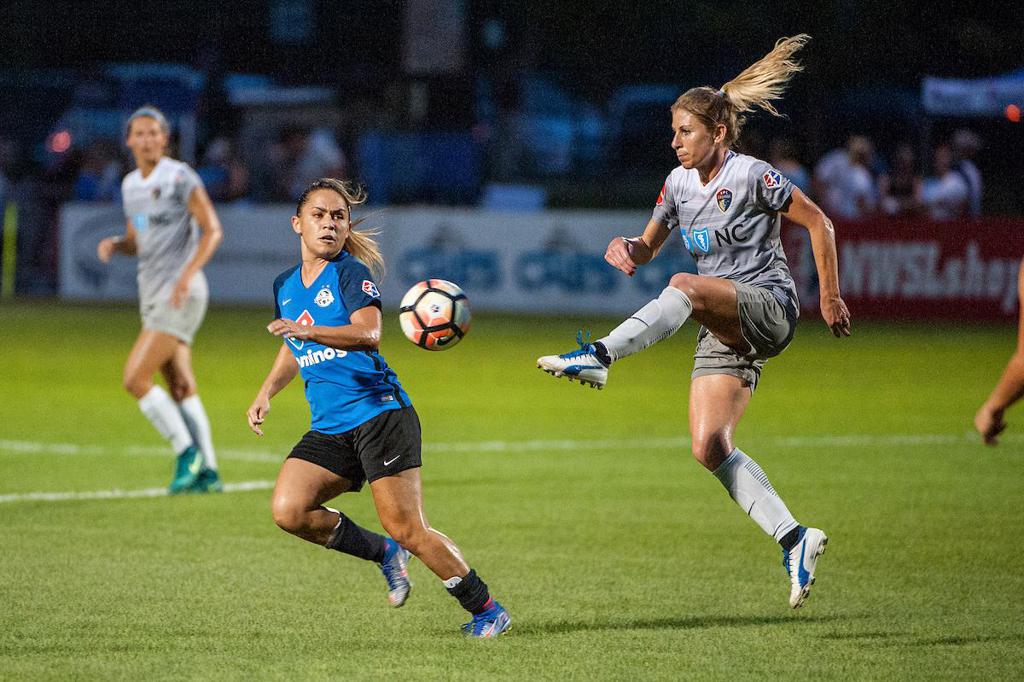 Match Preview:
The North Carolina Courage (10W-5L-0D, 30 pts, 1st place) travels to FC Kansas City (3W-7L-5D, 14 pts, 10th place) on Thurs, August 10 in an 8 p.m. ET matchup after the game originally scheduled for Sat, July 22 was postponed due to inclement weather in the Kansas City area. This is the second and final meeting between the two teams this season. The Courage earned three points in the first meeting, winning 2-0 over Kansas City at home in Week Eight of the NWSL season. McCall Zerboni scored off an assist from Abby Erceg to open the scoring, and rookie Ashley Hatch scored the first goal of her professional career to help lead the Courage to victory.

Last Time Out:
The Courage gained a confidence boost last weekend as the team defeated Seattle Reign FC 1-0 in front of an uplifting home crowd. Lynn Williams netted a Makenzy Doniak assist in the first half to lock in the Courage victory, and goalkeeper Katelyn Rowland earned the club’s league-leading eighth shutout of the season. With the win, the team reclaimed its top spot in the NWSL standings heading into Week 16.

FC Kansas City saw a positive road result last Friday after tying the Boston Breakers 2-2. Maegan Kelly and Erika Tymrak had a goal each to earn a needed point for FC Kansas City.

Players to Watch:
#9 Lynn Williams
Williams has returned from the Tournament of Nations ready to work. The forward has looked hungry for goals, and it paid off last weekend when her unstoppable shot found its way past Seattle’s keeper for the game winner. As the 2016 NWSL MVP and Golden Boot winner, Williams is deadly from anywhere in the attacking third, and her speed makes her difficult for even the best backlines to handle.

#17 Sydney Miramontez
Miramontez is a new face for FC Kansas City. The rookie defender had been playing for the WPSL’s GSI Pride until last week, and has already made an impact for the Blues. She signed her first professional contract with FC Kansas City on August 2, 2017. The Kansas native made her first NWSL start against the Boston Breakers on August 4, where she also notched her first assist.

Coming Up Next:
After Kansas City, the NC Courage will travel straight to Seattle to take on the Reign for the third time this season. That game kicks off at 9 p.m. ET on Sun, August 13. Tickets to the match can be purchased at NCFCTix.com and by calling the box office at 919-459-8144.